Return of the Wizard

(Scene opens with Mr. Wizard and Raul in the LAB)

MR. WIZARD: Okay Raul, in order to continue with our experiment we're going to have to don our protective equipment. Have you got your goggles and gloves ready?

MR. WIZARD: K? Kay? What the... Goggles and gloves! Do you have any? We're going to be working with acid, you stupid child.

MR. WIZARD: (Rubs his temples and sighs) I don't speak Greek or Gargoyle or whatever it is you're saying. Do you know what acid is?

(Mr. Wizard throws a beaker of acid in Raul's face. Raul runs screaming from the room)

MR WIZARD: Well, it looks like you understand now, Raul. Go get your fucking goggles. 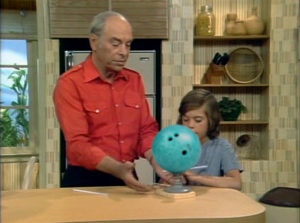 (Scene opens with Tracy and Mr. Wizard standing at the counter in the KITCHEN)

TRACY: That's strange, Mr. Wizard. I would have assumed that the bowling ball would have sunk like a stone! How is it floating?

MR. WIZARD: Well Tracy, it has to do with the density of the ball, or any object for that matter. You see, the ball on its own might feel heavy to you, but if its density is less than the density of that of water, or one gram per cubic centimeter, then it will float.

TRACY: So do all bowling balls float?

(Rick Astley leaves the KITCHEN through the PATIO DOOR)

MR. WIZARD: It certainly seems so. He felt the need to interrupt us by singing that god-awful song. I can't think of anything more annoying. Let's hope that never, ever grows in popularity or happens again.

(Scene opens with Mr. Wizard and Carl seated at the table in the KITCHEN. Tracy enters from the HALLWAY)

MR. WIZARD: Well, we've been going science-crazy in the lab all day, and we've been getting hungry. I'm gonna make Carl hotdogs. Would you like some too, Tracy?

MR. WIZARD: Of course you do, you fat little shit.

TRACY: I'd love a Carl hotdog.

CARL: Hahaha, he's not making Carl hotdogs. What he meant was he's making hotdogs for me, Carl. You big silly! 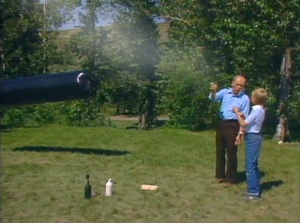 (Scene opens with Mr. Wizard and Bryan passing a joint back and forth under a tree in the PARK)

BRYAN: (coughing) Whoa... this shit hits strong. Where did you get it?

MR. WIZARD: Donald's ... (coughing) Donald's dad picked it up for me when he went to Argentina last month. I think it's laced with something.

MR. WIZARD: Wow. That's some messed-up shit. We should go for a walk and get the blood circulating then, right?

(Scene opens with Mr. Wizard standing in the DEN. Mary, Terry, Bobby, Victoria, and Phillip are seated on the floor)

MR. WIZARD: Okay, now who in here believes in Jesus?

MR. WIZARD: You're all three fucking idiots. Get out of my house and never return.

Thanks to Ian at Fused Muse For Creative Manipulations that Beggar Belief!