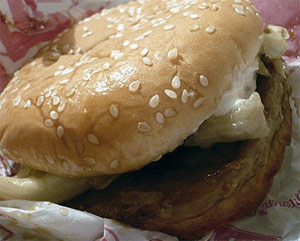 Musgrave Global Solutions is looking forward to a great 2010 for our Pork Products Division. Oinkeez Burgers continues to hold substantial market share in the pork and/or gristle patty sandwich retail sector. The introduction of our MDPM, or Medium-Density Pork Medley, has substituted 25% of the reconstituted pork content with human-grade non-gelatin thickener. With no reduction in taste or sales this innovation has resulted in a 9% increase in profit for all Oinkeez burgers, including the Lil' Trotter Kid's Meals and the Chief Bacommanche Triple-Bacon Fatback.

The recent acquisition of South Korea's Verdant Vector Biologic will give us an edge on Protean Primaritech in the field of consumption-grade human chimeras. VVB's HogginsTM have taken well to our d-23 treatment in production trials, suppressing speech and thought centers while keeping that same "humesque" taste that has done so well in focus groups.

As you know, d-23 is a proprietary neural suppressor chemical which can be easily introduced into water supplies or food supplies to reduce a population's higher brain functions and ability to communicate. D-23 is known on the market as Realmericol. Blind studies in US suburban areas suggest d-23 may serve a dual purpose for our Urban Friendliness Technologies Division.

We are currently checking with Mind Violence Solutions if they might have any applications for d-23 at their subsidiary corporations such as Nightmare War, LLC, Aggressive Incidents International, or Applebees, Inc.

As mentioned, d-23 is starting to be used in conjunction with our South American Hoggins operations.

The results are impressive.

Hoggins fed a steady diet of single or double dosage d-23 are passive, calm, and non-communicative. Hoggins generate three times the salable weight of meat as standard hogs. Their tiny hands are less likely to injure workers and the increased disease crossover risk can be mitigated by quadrupling all antibiotic doses.

Musgrave and the Board of Directors have no doubt that, thanks to d-23, hoggins are the future of terrestrial meat production.

Deprive hoggins of d-23 supplements and problems begin to arise.

Hoggins become increasingly aware of their condition and surroundings. They begin to communicate to workers, sometimes asking disturbing questions seemingly unrelated to their immediate surroundings. 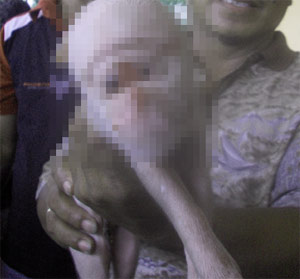 During a three-day d-23 shortage at our Venezuelan operation the hoggins became obsessed with the idea of entropy and repeatedly asked workers if they believed the products of a farm could succumb to entropy and whether, given sufficient time, entropy itself would succumb to entropy. These hoggins were humanely euthanized with flamethrowers and buzz saws. After psychological counseling we believe we have smoothed over issues with the workers.

It is imperative that we secure more of the raw materials necessary to continue our manufacture of d-23. Our supplies of polyporiphol and compound H are sufficient, but we must do everything in our power to ensure our mining operations in Southern Afghanistan remain operational.

To guarantee this continuity of supplies we have instructed StayKleen Pre-Moistened Wipes and their direct subsidiary, the United States Government, to increase the number of military forces operating in the region.

This should prevent a repeat of the unfortunate Hoggins incident of 2008. The last thing we want are those tiny hands getting ahold of another telephone.