Although I myself am not a white supremacist, I have long been a follower of the movement. For as long as I can remember, I have admired it from afar for its contributions to music, philosophy, science, political discourse and hygiene.

I was browsing the 99 cent bin in the music section of my local military surplus store when I found Prussian Blue's debut album, Fragment of the Future. I was curious, but wasn't really expecting much. I figured maybe the CD booklet would have pictures of them making out like Tatu. That's definitely worth 99 cents to me, so I threw it on top of my stack of Soldier of Fortune back issues and proceeded to check out. On the car ride home, I threw the disc in and instantly I was hooked. These angelic Aryan upstarts had won my heart before the first track was finished playing. Their harmonies were effortlessly saccharine as they chirped out ballad after folksy ballad about the plight of the white man and the coming race war.

Perhaps the most astonishing thing about this socially conscious sister act though, was their DIY work ethic. Every note and lyric on this masterpiece was composed by the preteen dynamos, and the results are breathtaking. With lyrics such as "The warriors are singing in Valhalla and in their homes / Our people are no longer afraid to walk alone" they prove themselves to be on par with even the keenest of their labelmates on Resistance Records.

Using my credentials as an internet writer, I was able to secure an interview with the two girls, Lynx and Lamb, who comprise Prussian Blue. I met them before an open mic last Thursday, at an ice cream shop across the street from the venue where they would be performing. They were dressed like they're headed to an SCA meeting in Holland, absurd dirndls and some chunky shoes that just screamed "white and proud." Lamb carried a leather satchel around her shoulder. 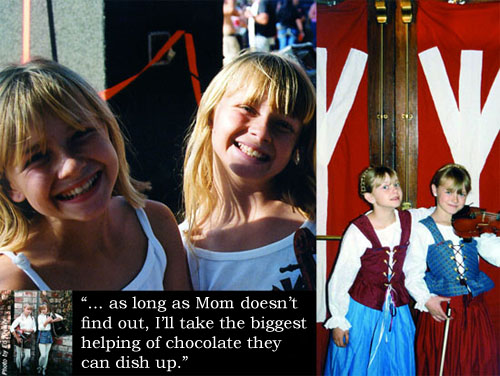 Terrorsaurus: Thank you for agreeing to meet with me. As promised, the ice cream is on me. Now for the $64,000 question: Chocolate or vanilla?

Lamb:Usually we order vanilla, but as long as Mom doesn't find out, I'll take the biggest helping of chocolate they can dish up.

Terrorsaurus: Well if that isn't a sign of things to come I don't know what is!

Lynx quietly orders a single scoop of vanilla. I sense a tension between the two of them, despite their apparent effervescence. The girls giggle sheepishly and we make our way to a booth looking out onto the street. We make small talk for a few minutes, and the they messily devour their ice cream cones. I was astounded to see people that small eat ice cream that quick. Just watching it gave me a sympathetic brain freeze, yet the twins were unfazed. Maybe there's a grain of truth to all that "master race" business after all.

Terrorsaurus: I have to ask, what's with the get-ups?

Lynx:Our clothing is a celebration of our German and Prussian heritage.
Lamb:Willow is one of my favorite movies so I get a kick out of dressing up all old-timey.

Terrorsaurus: Is your Prussian heritage one of the reasons behind the name Prussian Blue?

Lynx: Prussian Blue is the color of Zyklon-B residue, which was, by the way, never found at the so-called Nazi "death camps."
Lamb:It's also just a really pretty color.

Lynx:That's nothing. She fell down the stairs.

Lynx covers blue finger-shaped bruises on Lamb's arm with her hand and they exchange stern and inscrutable glances.

Lamb:I'm kind of a klutz.

Terrorsaurus: Your song "Victory" (available here from the Resistance Records website) is a little bit Neil Young and a little bit Manowar. Who would you say are your biggest musical influences?

Lynx clears her throat pointedly. There is a hint of malice in her voice.

Lynx tilts her head forward and massages her temples exasperatedly. 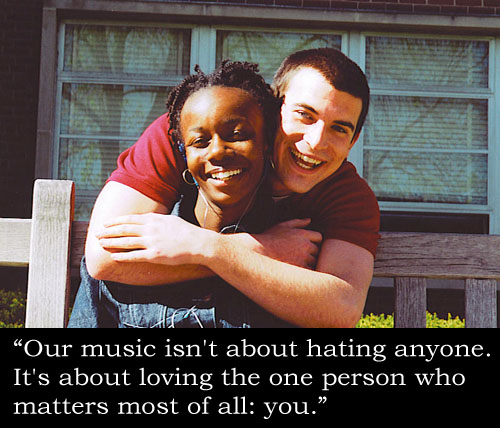 Terrorsaurus: You've been hailed by some as the "Olsen twins of the White Nationalist movement." Do you have a favorite episode of Full House?

Lamb:The one where Uncle Jessie moved out was really sad.
Lynx:I preferred Family Matters when I was really little. Nowadays we're all about Seinfeld though.

Terrorsaurus: I know I don't have to ask, but was your favorite Seinfeld-

Terrorsaurus: You mentioned earlier that you were big fans of Greenday. Do you think the critical and commercial success of their American Idiot album has opened the door for more alternative bands with political messages?

Lynx:We're hoping so. Breaking into the mainstream has been a dream of ours since day one. As far as we're concerned, the more people who hear our message, the better.
Lamb:I do think they've definitely blazed a trail for politically and socially conscious musicians, but to be honest I would like for Prussian Blue to explore more diverse territory.

Terrorsaurus: What do you mean by "more diverse territory?" Topics other than race?

Lamb:Well for instance, I've got a few songs I've been working on. One is about my first crush. There's another-
Lynx:[tersely] I think we're comfortable with our current direction.

Terrorsaurus:You've been accused of attempting to seed hatred and intolerance in the minds of young people. How do you respond to that?

Lynx: Nothing could be further from the truth. This is an example of how white liberal guilt is weakening America.
Lamb: Our music isn't about hating anyone. It's about loving the one person who matters most of all: you.

Terrorsaurus:So then your frequent references to war and Valhalla aren't about eliminating other races?

Lamb: Oh! The Valhalla stuff! [laughs] No, I read a lot of fantasy novels based on Norse mythology. I think it's always cute to sneak it into our music. It's sort of an inside joke.

Lynx elbows her sister in her bruised arm, causing a sharp gasp. She asks if they can be excused for a minute and I oblige. Outside, Lynx is gesticulating heatedly. Lamb recoils at every flail of her sister's arms. Clearly there is more to this relationship than meets the eye. When they return, Lamb stares at the ground, and doesn't utter a word.

Lynx: We're taking the stage in 15 minutes. We have to go get ready. It's been a pleasure talking to you and we hope to see you at the show.

The tone of her voice made it perfectly clear that I had worn out my welcome. I politely declined to avoid causing further trouble between the two, mainly out of concern for Lamb's safety. I watched them cross the street and duck into the coffee house they were performing at. I sat in that ice cream shop for about 20 more minutes, trying to understand what had just happened and scribbling down addle-brained little notes on my legal pad.

I packed my notes and recorder into my leather attaché case and began to head for the door when I noticed something sitting on the seat where the girls were. A CD case. It must have fallen out of Lamb's satchel. I picked it up and examined it. 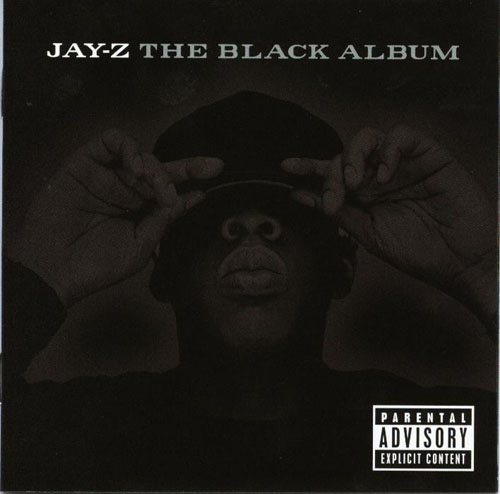