Watching movies is not something I would suggest to the unprepared. If you pick the wrong movie you're pretty much trapped after the first ten minutes or so and by the time it's all over you may have wasted up to three hours of your life. Nothing and no one can give you back that time and nothing will allow you to un-watch a terrible movie. That's where I come in, with micro reviews of movies to save you the time and trouble. 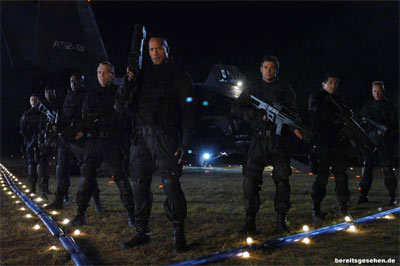 Doom
Micro Review: Your time could be better spent uninstalling Doom 3.
My Version: A lone marine on Mars spends the entire moving lifting a flashlight, spotting a zombie, then lowering the flashlight and shooting into the darkness. Out of anger he pauses at mirrors to shoot his reflection and will occasionally jump into rotating fan blades to end the monotony.

The Fog
Micro Review: Haha, they remade John Carpenter's worst movie! It will leave you wanting to curl up with a good Sutter Cain novel. Let me ruin this one for you: the Fog is ghosts!
My Version: There's probably some mediocre Japanese horror movie called "The Fog" about some spooky kid with the power to decide who lives and who dies that could have been remade instead. It couldn't be worse than "The Ring 2."

Elizabethtown
Micro Review: Legolas and Mary Jane in a romantic comedy directed by Cameron Crowe. If you're seeing this with your girlfriend she had better give you a blowjob right there in the theater. It has that fat old southern woman from Food TV in it for some reason so try not to achieve orgasm while she's on screen. If you're not seeing this with your girlfriend then that's your problem and you should probably talk to someone about that.
My Version: Every romantic movie can be made instantly better by adding Nazis. Look at "Casablanca," that is the ultimate date movie because it's all bittersweet romance but it also has fucking Bogart straight cappin' a Nazi at an airport. Beat that, Elizabethtown.

Flight Plan
Micro Review: Jodie Foster's daughter gets kidnapped on an airplane and no one believes that she even had her daughter on the plane with her. It's a preposterous misunderstanding straight from an episode of "Curb Your Enthusiasm" only it's creepy and tense! The premise is so embarrassing that you'll be hoping for Sam Jackson and some fucking snakes to show up on the plane to turn it into action comedy.
My Version: "Snakes On A Plane." Jackson threatened to drop out of the movie's production when they were considering changing the title, so they changed it back to "Snakes On a Plane." Snakes on a fucking plane, man.

A History of Violence
Micro Review: Aragorn is a small town restaurant owner with a dark past. When some sinister people show up and start sinisterly looking for him things get sinister. Their leader is an extra-sinister Ed Harris. Cronenberg is about 50/50 when it comes to directing. For every "Dead Zone" there is a "Dead Ringers" and for every "Videodrome" there's an "eXistenZ." This one doesn't have twin Jeremy Ironsi, meat guns or people ejaculating over car wrecks, so you're probably safe.
My Version: Oddly enough, my version has meat guns, twin Jeremy Ironsi and people ejaculating over car wrecks…but it's fucking awesome! 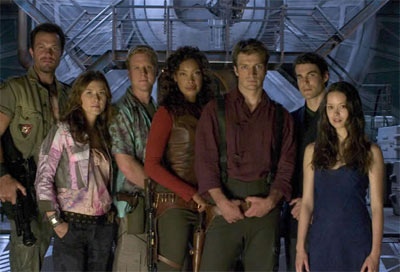 Serenity
Micro Review: At long last Joss Whedon's failed TV series comes to the big screen and America shrugs its collective shoulders. If you liked the TV show you'll like the movie. If you liked that cartoon with the robotic horse that had a shotgun then you'll probably like the movie. Most everyone else won't like the movie. Also, just in case you were considering seeing the movie, Kaylee gets killed by the Reavers at the end.
My Version: I think it's awesome and so was the TV show, but Joss Whedon needs to write fewer one-liners and stop thinking he knows what the hell he's doing with a gun battle. A few of the lingering pretentious moments should be replaced with a little more development for the characters that were mysteriously sidelined. Also, put some fucking shoes on that girl, Whedon. We don't care about your foot fetish. 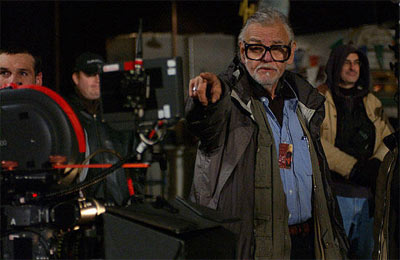 Land of the Dead
Micro Review: Remember how in "Day of the Dead" mankind seemed to be down to the last few survivors isolated on a military base? Forget all that. Dennis Hopper has created a capitalist wonderland and he's got a bunch of commandos tooling around zombie country scavenging in a giant super truck that can shoot fireworks. And the zombies are becoming intelligent for some reason. And we're supposed to forgive all this nonsense because George Romero is the grandfather of the genre. If your real grandfather takes a big shit on your carpet you're not going to love it because "oh, that's grandpa." You're going to clean it up, put grandpa in a diaper and try to forget it ever happened. Try to forget this movie ever happened.
My Version: I always thought a cool idea for a continuation of Romero's movies would be some sort of ship returning to the mainland to try to find survivors and restock their supplies. They could sift through the debris of a dead world, like find video tapes of survivors who inevitably succumbed to the zombies or find a dog surviving on its own like in "I Am Legend." However, this movie depresses me so much I'd rather just have my version be something like "Romero dies from a heart attack in the middle of the pitch session."

Unleashed
Micro Review: Jet Li's Dog can barely speak English, just like in real life, and he is kept like an attack dog by Bart (Bob Hoskins) who takes a collar off and sends him after his enemies. There's some other shit where Morgan Freeman is a blind piano tuner and his brace-face daughter is the younger lesbian girl from HBO's "Rome." Bob Hoskins is awesome and it's really great when Jet Li is basically beating up a Guy Ritchie movie, but when they do shit like send him to some ridiculous pit fighting competition or have him fight some bald white guy in robes it gets retarded.
My Version: Get rid of the pit fighting and just have Jet Li literally beat up Guy Ritchie. If you could throw Madonna in maybe he can hit her hard enough to change her kid's names to something normal.

The Hitchhiker's Guide to the Galaxy
Micro Review: "Douglas Adams wrote the script" is sort of like the Romero excuse for Land of the Dead. This moderately-faithful adaptation of Adams' nerd-beloved book by the same title is a meandering road movie in space. Fans of the book will no doubt force riotous laughter from their ample bellies at the visualization of Adams' puns and gags that they have read dozens of times over. Oh yes, the fucking whale falling from the sky! At long last, in color! Some of the settings are imaginative and some of the movie is interesting in the way a museum display of butterflies might be, but ultimately what it shows is that Adams' story just makes for a shitty movie. You just don't care about the characters in the least, you don't care about the plot and you don't really care about the jokes.
My Version: Chris Tucker. Everywhere. Ten Chris Tuckers. Thirty. Maybe even fifty of them. 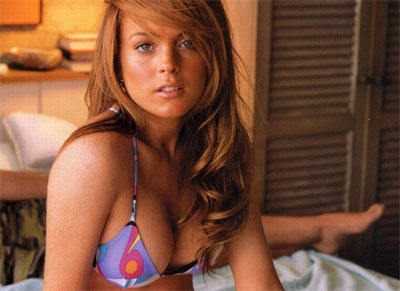 Herbie: Fully Loaded
Micro Review: The last Herbie movie (I think, I don't really keep track of this shit) featured blue collar cult-favorite actor Bruce Campbell humiliating himself for a paycheck as he is wont to do. This one just has an awful CGI Volkswagen and Lindsay Lohan with a suspiciously unnoticeable bosom. Supposedly Disney turned the clone tool on her rack and erased the 500,000,000 years of evolution we had all suffered through to achieve the perfect breasts. That story was probably untrue and Lohan just shaved them off with diet tips from Paris Hilton. She had better turn into the next fucking Meryl Streep because otherwise I will never forgive her.
My Version: Watch "Mean Girls" with your pants off. Actually, scratch that, I think that might be illegal in a few states. 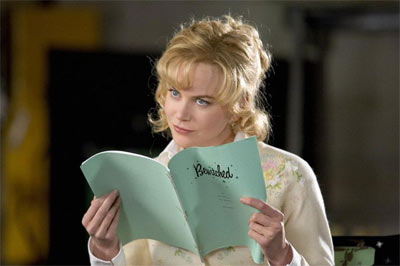 Bewitched
Micro Review: Possibly the worst movie I have seen this year. The movie's horrible meta-comedy (Nicole Kidman is a witch who is playing a witch on TV) and Ferrell's obnoxious and one-dimensional character make for romantic tension that you could cut with a light breeze. If you head to the rental store and the only two movies left are this and "Eight Minute Abs" then just watch "Eight Minute Abs" ten to twelve times. By about the sixth time it should start to get funny.
My Version: After watching the movie I really would just like Will Ferrell and Nicole Kidman to be dragged behind a horse through some brambles. You could film that and show it to me and it would probably make sitting through "Bewitched" almost a worthwhile experience. Nora Ephron should also probably have her hands cut off before she writes anything this bad again.

If I have prevented even one person from watching "Bewitched" then I have done my job. I hope everyone enjoyed the movie reviews; they should because I am an expert at watching movies. I watch them so good no one can handle my skills. Watch this: "Five stars! A triumph of the human spirit!" Can you do that? I didn't think so.