Quick Checklist: the Things the Internet Has Ruined For Me

I would like to take this moment to sincerely thank the Internet for ruining the following three things for me:

This is not healthy for human beings or any other living organisms.

Cartoons are a popular Internet target thanks to the fact that they are much easier to draw than human beings and most pornographic Internet cartoon artists have issues with actual human beings. I believe the biggest issue they have is the one that prohibits them from being able to use their mouth to communicate with other living, non-fictional human beings, but after knowing what these people place in their mouths, I'd say this is a good thing. The only time they ever come into contact with other humans is when their ISP is forced to call and warn them that posting home drawn money shots from "Doug" is not allowed on their hosting space. Additionally, each cartoon character they pump out in Paintshop Pro usually has only about 10 different colors to them, which is good because that means there's a lot of contrast between those dark colors and the copious amounts of opaque liquid which is inexplicably flying out of one of their holes like somebody unleashed a White-Out geyser. If you have any, I repeat any childhood cartoons that you remember fondly, please either agree to never use the Internet or prepare to have your memories crushed and mutilated like Randy Johnson hurling a diseased carp into industrial fan. Just accept the fact that somebody has turned your animated memories into transsexual gangbang orgies and move on. 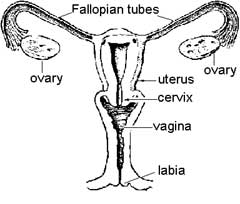 This diagram is slightly inaccurate for images found on the Internet; the bottom four points should be stretched outwards to eight times their normal size, large enough to fit an entire spare tire.

2) Sexual organs. Before ever using the Internet, I was ambivalent towards sexual organs and their functions. I knew that horrible, dirty things involving gross body parts and foreign items occasionally happened in some odd places across the globe, but I never worried about being slapped in the face with them (both literally and figuratively speaking). Now, more than a decade after first going online, I find myself so dramatically desensitized to every sexual perversion that nothing shocks me anymore. It's like regularly ingesting a drug that you really don't want; you start out being shocked and mortified by Ye Olde Gaping Anus (do not click), and after enough months you eventually get to the point where you aren't even phased by Ye Olde Spewing Hole (do not, I repeat do not click). There are simply no more sexual organs left to become disfigured and consequently horrify me; I've seen it all many times and from many angles. This goes the same for dead people pictures, "I Live In a Stupid, Shitty Country And I Got This Rare and Terrible Disease From Orally Pleasuring a Dog-Sized Maggot" photos, and Jack Chick comics.

I remember the novelty gross out sites had to me when I was young and stupid. However, as I grew up to become old and stupid, I realized that I needed something more graphic and disgusting to have the same effect on me that a simple "oh my god, what is that woman doing to her pee-hole?" image did years ago. I'm frankly at the point where I've repeatedly witnessed the most repulsive cross-section of human sexuality that doesn't involve growing brand new sexual organs and then paying somebody to ram into them with a parking cone. Every horrible thing that could be imagined by mankind has been done, photographed, and shoved into my eyesight, mostly due to the "people" in Fuck You and Die. I suppose I should thank them for amassing an arsenal deadlier than any empty chemical warheads America finds underneath Saddam's sink, as they spam images so horrible that if Japan's government knew they were allowing the exportation of such material, they would willingly nuke themselves from orbit. 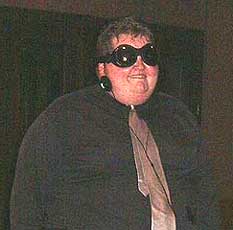 Welcome to the Internet. This man will be your chaperone.

3) The English language. Now I don't want to sound like a pretentious twat here (because I'm too stupid to act pretentious correctly), but I had generally positive experiences and outlooks on the American educational system before falling into the lures of the Internet. Sure there were people at my school who protested the government's educational policies and claimed schools were underfunded, understaffed, and full of kids dumber than a bucket of hair, but I never listened to those people or hung around with them because - let's face it - they were nerds. Now I realize how lucky I was to escape my high school without being stabbed in the face or shot by somebody who uses the number "1" in place of the letter "I" when writing about his favorite Magic: The Gathering cards in between rounds of whatever "shoot everybody in the head with realistic weapons" game is currently popular. There are enough bastardizations of the English language currently floating around the Internet to make you think that we're living in some kind of post-apocalyptic wasteland divided up between 100 battling tribes, each with its own set of customs, language, and set of rules one must either abide by or get dumped into the arena to battle a mutant roach that shoots fire out of its eyes. Here's a quick example of Internet English Bastardizations (IEBs) scraped from the top of my brain, each attempting to write out "Hello, I went to the store, now I'm going to play a video game and go to sleep":

HIP HOP INTERNET HOMEBOY: "yoyoyo, i wuz goin2 da sizzstore , i came bizzack and yo gonna peep dis sheeit on da fLYZ tip play me up sum vGAME, git mah game IZ-ON yo den gon katch some Zs onna bizzsammed 4 peepz yea niggah peace out."
COUNTERSTRIKE CLOWN: "HE
HEY
I want to
yo, u there/
I win 2 the store
b4
hey
whas up
but Im back nbow
im gunna play sum CS
DN server with -={bL4KH4Wk}=-
l8r
hey, u there"
INTERNET GRRL: "hey yeah *_*.!! I ws at teh~ store ebfore ebut then I like sdecdied to cometi heback because I saw waI wanted to watch a ppogram on TV ^_^ but it was walll tah teh televsiion was off so I had too call mtmy mom :- and she awuz like 'April, I teotlf told yuo hawohow to tunr on the teTV yesterday girflriedn and I wuz liek not yuo didnt!!!' ^_- so sinstated ai updated this alLivejoruanl and mayeb I go to asleep in a a btielltittle bit aftera I take the mdeication."

Those are just three of the infinite number of English bastardizations currently floating around the Internet like "authentic" Britney Spears nude photographs, but I can assure you that there are many others lurking in the shadows, mating and mutating with other disasters to produce a strain of communication that will eventually become as lethal as an injection of anthrax into your heart.

Sure there are other things that the Internet has robbed from me, but this was just a checklist of the three most basic things that I feel are missing from my life. Of course, if somebody claims the biggest things absent from their life involves cartoons, sexual organs, and the English language, you know that they obviously have larger issues they need to deal with, but I accepted that long ago.

Unlike the above update, the Tuesday Goldmine is here and it doesn't suck ass! Hooray! Today's theme was "Photoshop Roulette," in which SA Forum Goons had to take two random images, Photoshop them together, and form... well... I'm not quite sure what they formed! But hell, it's here and is in image format, so what have you go to lose? 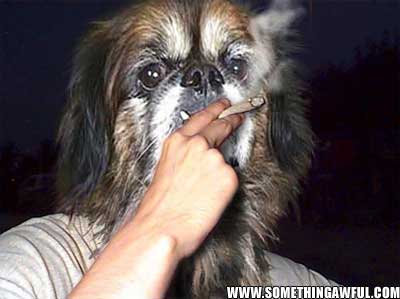 Far out! Smoke Goldmines every day!