Revenge At All Costs 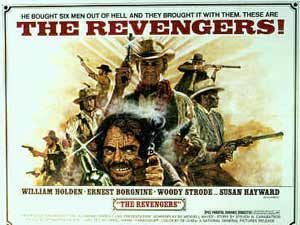 I can do this too!I have never been a vengeful person, though I have long believed that if someone were to wrong me, I would have no difficulty destroying them. By destroy I don't mean kill, because that would of course be questionably legal and really kind of extreme when you get down to it. I am referring more to the idea of systematically defeating every ounce of a person's being, because that's just good revengin'. Besides, if you were to kill someone, what shame and humiliation would they suffer? Death is merely providing them an escape.

In recent weeks I have been giving a lot of thought to the idea of pursuing a life of vengeance, like that of John Walsh or the Punisher. For as long as I can remember I have been a sane and rational man capable of seeing all sides of a situation and handling things in a responsible manner, but the rewards to that kind of living are meager at best. When you think about it, all that separates us from a quality vengeance-driven life is a simple wall of glass. What does it take to drive a man to shatter that glass wall into a million shards? What stands between me being like everyone else, and me armor plating a lawnmower and landscaping a trail of bloody vengeance across America? The answer is incredibly simple. It's a matter of choice. It's a matter of weighing the pros and cons and realizing things are simply better if you're vengeful. Vengeance is a lot more than just harming people. It's about empowerment, which is something everybody can appreciate. Plus, the morale boost from defeating an enemy in some form or another is great for self-esteem. Yes, vengeance does a lot of good for a man's spirit.

Before you get the wrong idea, realize that choosing a life of vengeance was not easy for me. My problem is that I am simply not a jerk. As a nice guy, I endeavor to be polite and non-hostile to everybody I regretfully encounter. Why would a nice guy go out of his way to cause trouble for someone? I decided that, as a service and a courtesy, I would not initiate vengeance unjustly. Naturally, this brings us to the act of revenge. Revenge is complicated as it is not a first strike, but rather a response to some wrong rendered against you. This choice created some difficulty for me, as you might imagine. I am very proactive, and so waiting around for somebody to wrong me is hardly the kind of vengeance-fueled life I set out to live. Logic happened to be on my side, as I realized that I am being deprived of my true nature by society. Being deprived is being wronged, so I have the right to take revenge. Just so nobody has any moral ground to stand on should they accuse me of being unnecessarily vengeful, I turned to my knowledge of social science to further justify my life choice. 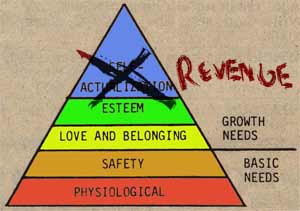 You're a dead man, Maslow.Abraham Maslow once concocted what he called a hierarchy of needs, which he illustrated by drawing a pyramid divided into several levels of ascending importance. At the very top, the apex of the pyramid and thusly of human need, he had the need for self-actualization and transcendence. Based on my current situation, I can accurately and scientifically state that Abraham Maslow was a moron. It is a need for revenge that drives me, that makes me what I am, and that need supersedes and thusly comes higher than self-actualization. To set things right I took an image of Maslow's hierarchy and crossed out "self-actualization" and then wrote in "revenge." Seeing as how I had pretty much reinvented the idea of a hierarchy of needs from scratch, I decided to just remove Maslow's name from the equation. Also I decided pyramids are for jerks and ziggurats are far more edgy. Thus saw the birth of Josh Boruff's Ziggurat of Revenge, which clearly puts things into perspective and gives my quest for retribution a scholarly backing. I got a giddy thrill thinking about how Old Man Maslow was probably spinning in his sarcophagus after what I did to his pyramid. It turns out getting revenge wasn't so hard after all, even though nobody had really even wronged me. The time had come to put my ideas into action.

The Olympic Committee rejected my request to make crying an official sport. Weeks of rigorous Olympic training were wasted by their stern refusal to embrace the sport of the future. In an ironic twist, it was their rejection letter that gave me the inner resolve to break all my previous records. I suppose I should thank them in a way, thank them for making me the de facto crying champion, but why should I do that? Here was a golden opportunity for revenge that only a fool would squander by taking the high road of acceptance or gratitude. I decided the cronies who rejected my proposal simply did so out of fear. They feared the sparks of revolutionary fire that I was causing by repeatedly rubbing the sticks of change together. Some people can't accept the notion of change, even if it stands to benefit them.

I sent a letter of response directly to the head of the International Olympic Committee, Jacques Rogge, in hopes of getting some revenge against those bastards who rejected my proposal.

Your subordinates are jerks and I think you should hire me to fire them. I'll have those scumbags eating dog food out of a mailbox with their shoes untied before the week is over.

Also, I'm pretty sure that a few of the athletes competing in the Special Olympics are – how shall I put this – below average intelligence. You might want to consider implementing some standards. That's something I could help your organization with. 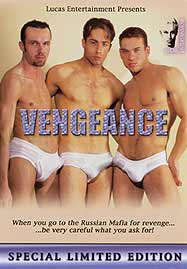 I found this image searching for vengeance. But this isn't the kind of vengeance I want any part of.I can only imagine that my words raged like a thunderstorm of pure anger that left a rainbow of black and blue arching over his bruised ego. This presents a win/win situation for me, because if he accepts my offer, I have a great job limiting the triumphs of mentally challenged people while firing some enemies in the process. If not, it is very likely he will take my request as an insult, therefore vindicating all wrongs done to me by the International Olympic Committee. For those of you keeping score, this was my first successful act of revenge.

Getting revenge is like winning a lifetime supply of Rice-A-Roni. There is a certain primal thrill that comes from truly besting another human being, one not unlike the primal thrill of having more Rice-A-Roni than anyone. Once you taste the sweet nectar of revenge, you can't help but want more. Because of my hunger pangs, I've been looking all over for things I can get revenge against.

The Merriam-Webster English Dictionary has thus far refused to include the word "mummories," which I consider my most important contribution to the English language. Referring to a person's unique mummy-related memories, mummories has a near infinite number of uses outside of simply just being an efficient word. Merriam-Webster's refusal demonstrates that they are completely out of touch with the modern era and is a clear indication that they are firmly opposed to the evolution of language. To refute that our language is evolving is foolish and downright destructive. As times change we need new words to describe new things and ideas. Mummories is an important word, one which Egyptologists and museum curators could benefit from greatly. Are we to deny the usefulness of a word simply to preserve some ridiculous notion of linguistic purity? It looks as though my second act of revenge will be to bring down Merriam-Webster for not just myself, but for all those who favor progress.

In the winter of 1996 I was violently player killed by a sadistic wizard who used an exploit that enabled him to shoot fireballs in town. Remembering that wizard's name will be intrinsic to accomplishing my third act of revenge. Once I figure out who it was that wronged me, I will be able to find out where this person lives. Then, I'll take a photograph of his or her house and post it on the Internet with a threatening caption. With any luck, this foul person will be driven mad contemplating the unknown possibilities for terror the Internet offers.

I'm definitely only beginning a long journey that is sure to consume my soul with meaning and greatness. To simply accept the world and live with it is the retreat of fools. I will get my revenge, wronged or not, because everybody needs a purpose in life. My purpose is revenge, and I look forward to reaching my maximum potential at your expense.

Welcome to the Flash Tub!

I'm very pleased to announce that Something Awful has a brand new feature – the Flash Tub. Shmorky, Something Awful's talented regular illustrator, will be presenting new cartoon shorts and suchlike each week, assuming he is sober and not being eaten by bears. 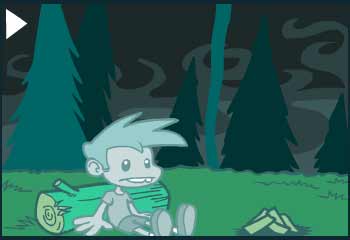 I asked the fine gentlemen/women in FYAD to create music using only sounds from the Game Genie Video Game Enhancer for the NES. I supplied the sound effects for them. They made music and I animated my favorites. Here are the results. Enjoy or don't.

Make sure your sound is on and you have Flash player installed, then check out the sizzling first edition of the Flash Tub!