Here's one of the many emails I received about my last update. On a completely unrelated note, I'm filing a restraining order against the entire internet.

Getting all intimate with the promiscuous trollop that is internet writing has turned me into the type of person I hate the most: a straight male who pretends to be gay/bisexual. The saddest part is I'm not even doing it to score with the ladies. I've long since given up on ever having a relationship with a human female as that part of my brain was born with vital cogs and belt shafts missing. I can recall only one instance of a girl ever wanting my company. It was last year in my british literature class. When I found out that she wrote horrible poetry and enjoyed the Dave Matthews Band I should've just come clean and said "Look, I don't think we're very compatible, so I was wondering if we could just engage in an elaborate bondage ritual and then get on with our lives." This story reminds me of all the other great memories I have of college. That will be tonight's theme as I lay my hands upon this keyboard and give fiery genesis to an update. Note: As a special bonus, all Something Awful Ice subscribers will have access to the amazing follow up article, "Memories of College with tiled background images of 1920's strongmen".

Yesterday I called up my former college dorm mate, Wayne. "Hello, Wayne?" I said. "This is Jed. You made fun of me in college. I've been looking back on my first year of college, specifically the way I acted like a complete self-effacing fool, and I was wondering if I could blame you for some of that. It's just that otherwise I'd have to see my actions for what they really are; the violent thrashings of a broken man who beats against the door to his cage of self-doubt until finally, fists bloodied, he resigns himself to a life of quiet desperation."

"I'd have no problem with that." Wayne said.

"Great. You know I should really be thanking you for making fun of me. You showed me places inside of myself I never knew existed. Breathtaking vistas every bit as beautiful as the default wallpapers packaged with Windows ME. And people say there's no god. Hello?"

When new students arrived at my dormitory they were immediately stripped naked and doused with cologne. They were then issued a flannel shirt, khakis, and a hemp necklace and directed to an adjacent room where RAs were on hand to hook them up to IVs of Bacardi. You never forget your first night of college. That's when it hits you that you've taken a Day of the Dead elevator ride down into a dark, claustrophobic nightmare world and the elevator door has just closed above you. That night I dreamed that I met a physical manifestation of my sense of self. "Why are you so small?" I asked.

"Because you stopped working on me when you were six." my sense of self replied. "Tell me, could you have picked any more of a myopic romanticist worldview to adopt? I guess it's because of the anime videos, an indulgence of your feeble imagination and its constant need for childish escapism."

When I woke up two astronauts appeared in front of me.

"We're here to entertain you while our master eats your brains." the first one said. "We'll do whatever you want."

"Awesome! Write me a review of Serious Sam: Special Edition for Something Awful. Here's the angle: Serious Sam or Serious Scam?"

One night during an all night coding session in the computer lab, my classmates, Justin and James, asked me to design the main character for their boxing game, Jake Sutton's Brawl Hall Beatdown. "I made Jake Sutton a drug user." I said. "Isn't that totally badass? I mean you've got to be pretty hardcore to do something which, according to public service ads, is the metaphorical equivalent of drowning or being skewered by a giant needle. When the pilgrims came over on the Mayflower, drug users were the guys wakeboarding behind the ship." The college janitor would periodically walk into the room and talk to us. We must have seemed like gods to him. This aggregate of unmopped floors - his personal hell - was a place we were free to enter and leave at our own convenience. Suddenly it occurred to me that the janitor's attempts at shooting silken strands across the void to connect with other souls were just as hopeless as mine. I was just outside of Justin and James' circle of friends, out in the perimeter beyond their friendship bunker, which I imagined had an X-Box and all the premium cable channels.

The suffocating routine of college life was an experience akin to that of making a Quake 2 level with the e1u1 texture set. You had a little bit of freedom but the template was firmly in place. Wall, pillar, wall. Class, lunch, class. My roommate, Ari, and I went to a dance at my college. "What do you mean we can't go in?" Ari said to the man at the door.

"The theme of this dance is togas." the man said. "You're dressed like characters from Final Fantasy VII."

"Oh that is so lame jumping on the FF7 bashing bandwagon like that." I said. "The fact is it was a groundbreaking RPG and a milestone in the process of the genre itself becoming more adult. You're probably one of those hipsters who reads insertcredit.com and tells their friends they can appreciate the porn-as-art movement. Well, congratulations, you've depleted my data crystals. Your army stands victorious atop a bone pile high enough to blot out the sun." 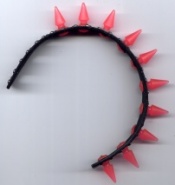 I consider this a brief flirtation with gothdom, although it's really more like a drunken booty call."Is that a pink rubber spiked bracelet you're wearing?"

"What are you saying? That I rationalize wearing goth and/or punk accessories by telling myself they drive away those unworthy of my friendship when in reality if I had the social skills to properly interact with people I'd fall for the first fat chick who was willing to tie me up?"

The DJ put on "Hot in Here" by Nelly.

Without saying another word Ari and I ran to the middle of the dance floor and performed a series of break dancing moves from The Bouncer. A stunned silence fell over the room. The single greatest moment in music history took place in a college gymnasium in Concord, New Hampshire, as those who were lucky enough to have witnessed it would tell their children and grandchildren for years to come.

On a brisk November afternoon in 2001 my friend, Josh, and I sat at Burger King and discussed how we were going to get revenge on Wayne for making fun of me. "We could slash his tires." Josh suggested.

"Slashing tires? That's something a redneck would do. Yeah, take that, Wayne. From the trailer park's heart I stab at thee."

As usual I had missed the relevance of what had just happened. Josh and I weren't exactly soul mates, and if I showed him my fortress of solitude he wouldn't know what to make of all the Cure cds and Jhohnen Vasquez comics I have lying around, but he was willing to slash someone's tires for me. There's something incredibly touching about that in retrospect.

"Wow, that account of your college experiences was truly amazing." James said. "Hey, later on some of the guys from work and I are going to join a server and ruin a game of Wolfenstein: Enemy Territory. Justin's going to team kill. I'm going to block doorways. Would you like to join us? We could use someone who just spins around in circles firing their weapon."

Ryan "OMGWTFBBQ" Adams in the hizzy. In the hizouse.

Forum Goon iDust found this crazy DVD piracy site, http://www.piracyisacrime.com/. There are lots and lots of poorly done "Images" that the Goons have fiddled with. Here's an example:

Here's what the Goons cooked up: