Hello, "boys" and "ghouls!" Welcome to Spooky Steve's Halloween Sound Effects Album Reviews: the Internet's definitive source on Halloween sound effects albums since 1996! Spooky Steve needed to take a few months off after his last update to recover from the real-life R-rated horror of losing his one and only soul mate, Creepy Carol, but now he's back with a handful of new reviews from the third fastest-growing genre in the sound effects album industry! Spooky Steve swears he will not leave this mortal coil until we finally beat fart compilations in popularity. It'll happen this decade, kiddies!

Spooky Steve's not going to lie to you; he's been in a dark place. Darker even than the caverns of Hell portrayed in Jim "No Bones" McCullough's seminal 1967 "Groovy Graveyard Delights" album. But Spooky Steve recently met a man in the mall who gave Spooky Steve some pamphlets that informed him of what may be the scariest concept his twisted mind had ever witnessed: eternal damnation! That's right; Spooky Steve now walks with God, and he's even given up his tenure at Sears to work at what Pastor Billy calls "The Compound." But that doesn't mean Spooky Steve has given up his first calling in life!

But be warned: now that Spooky Steve has become aware of the indescribable terror of God's Wrath, even the most accurately-depicted mummy shuffles won't make him quiver! 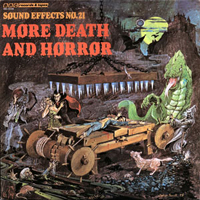 Spooky Steve has been saving this album for a special update, because it's one of his all-time favorites. Spooky Steve remembers being eight years old and cranking the volume on this album to blot out the sounds of his mother "entertaining" Spooky's Steve's various "uncles" in the next room! But Pastor Billy says Spooky Steve needs to throw away any remnants of his past life after being reborn at The Compound. Well, Pastor, we'll have to agree to disagree on this one, because More Death and Horror is one of the best Halloween sound effects albums to come from that fabled year of 1964. Spooky Steve put this one on while doing an inventory check in the weapons stockpile room of The Compound, and -- wouldn't you know? It actually attracted its share of positive comments from my fellow drones in Block D! And did I see Pastor Billy nervously shiver at the distinct rattling sound of those authentic antique chains (I checked the liner notes)? Your move, Pastor. 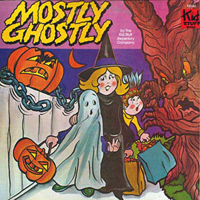 Yawn. Yet another grade school gymnasium haunted house caliber album. Spooky Steve can imagine Mostly Ghostly being played in the background as bored children drink watered-down fruit punch and stick their hands in wet spaghetti -- as if the hair of a witch could accurately be imitated without fresh seaweed! Spooky Steve thinks that if you really want to scare children, you need to tell them about the eternal suffering they'll face if they don't accept the teachings of Pastor Billy. Spooky Steve and a few other Followers created a puppet show with this intention in mind, but certain fire codes and small-minded superintendents have prevented Spooky Steve and The God Squad from performing in any local school district. Pastor Billy says that children aren't important until the later stages of The Uprising, but Spooky Steve hasn't even been privy to the first stages -- here's hoping they involve giving Spooky Steve more breaks on guard tower duty!