Rick Perry is in All Sorts of N-word Trouble

Wait until they find out where Obama was palling around with terrorists.The conservative blogosphere has been predictably forgiving of Perry, wondering why anyone should care about Rick Perry's ranch being named Niggerhead when song rappers can play their jungle music and say the n-word as much as they want. As one commenter on Free Republic eloquently put it, "the biggest racist and promoting the division is Obozo!"

Much has been made of the fact that Perry's father, not Perry, leased the property, although Perry's name was on the lease as recently as 2006. Perry has reasserted that he had his father remove the phrase from the sign (at the end of the driveway, keep in mind) despite the refutation by the original article. Visitors in the 1990s saw the name Niggerhead on the sign, the property was called Niggerhead and locals still refer to the property as Niggerhead.

That's all because this is a liberal trap. And one of Perry's GOP opponents fell for it.

"There isn't a more vile, negative word than the 'n word,' and for him to leave it there as long as they did is just plain insensitive to a lot of black people in this country," Cain said on "Fox News Sunday."

Really, Herman Cain? No word more vile? What about "taxes?"

Fortunately for Perry, the throne room full of inhuman ghouls that really choose GOP presidential nominees are unlikely to take the feelings of black people into account when making their selection. Why should they? A full 95% of black people voted for Obama in 2008. A GOP candidate is unlikely to fair much better in 2012, because black people are the real racists. 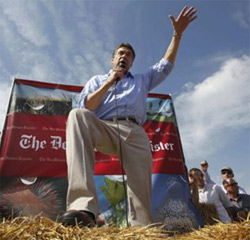 Those were the salad days of the Perry campaign. Or at least the embarrassing corn dog days.So what can Rick Perry do to get himself back in the game at this late point? He caught a lifeline after Bachmann flubbed her effective HPV attack by claiming the vaccine could turn kids into dwarves. He squandered his chance and plowed into the dirt with three debate performances that topped Ron Paul blaming 9/11 on firefighters. Add Niggerhead and things are dire. Unless Perry acts quickly the GOP might be looking at its first nominee that requires a car to get from Marine One to the White House.

Send enough Carvel ice cream cakes to the governor's mansion in New Jersey and maybe Christie will end up in a diabetic coma. That would just open the way back up for Mitt Romney who has a 59-point plan for becoming president that he would really like you to look at so go to his Orkut page. Take Romney out and Michele Bachmann might seize the opportunity and take back the lead. The thought of Bachmann winning the nomination is chilling.

She could put her human eyeball contacts that she wears to conceal her goat eyes back in and say something long and crazy about never paying any taxes and leaving medicare alone. It would seem ridiculous, but she would be elected by literal willpower, concentrating all of her mental energy on minority voters until they turn into smoking green gems lying in the streets and piled in the backs of overcrowded pickup trucks. She can win, beat Obama, be inaugurated and then submit to Marcus and allow him to turn the White House into a non-stop disco party for all the way-straight guys he turned from being gay with aroma therapies and back rubs.

Actually, maybe we need Rick Perry. Let's forget about this whole Niggerhead thing. I'm sure it was harmless fun.