Rioting for the Disabled 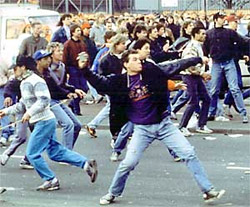 Somebody must have won the big game and/or been shot to death by police while unarmed.Rioting is a vital component of a healthy democracy. Without rioting Americans would never be able to gather in large inebriated masses and violently express our emotions. Riots are what happens to peaceful protests if you add enough anarchists and cops. They are also what happens to sporting events when you add enough beer.

I have never been in a riot, but I think I would like to try it out. I wouldn't want to be the guy who throws the Molotov cocktail or gets shot by the police water cannon. Maybe I could just kick a door a few times and scuff it up or throw a few grapes at a brick wall. I can work my way up to the real brutality like setting fire to a trashcan or spray-painting a picture of a horse on the side of a bus.

I think I would also be pretty good if they need a guy to hold a stick and raise it up and yell, "Nooooo!" I'm tall and I've got a bunch of sticks in my backyard. I can yell pretty loud.

The main thing holding me back from rioting is the idea of being tear-gassed. That and all the walking. I don't really want to spend all day walking around just to be forced to cry. It doesn't look like there are many good places to sit in a riot. I would also need to buy one of those camelbacks to stay hydrated and those are pretty pricey.

I also don't like rubber bullets. They sound fun, but I don't think they are because I read about a guy who died from one. You usually can't die from fun things that aren't drugs. Well, I guess you can die from jumping on the trampoline too high. That's probably pretty fun. 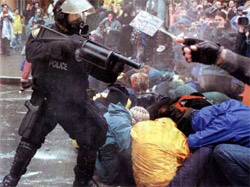 Not fun!Rioting seems like it's the sort of thing everyone should do at least once. Even handicapped people should riot.

Then the South Korean government decided to ruin a good thing by granting massage licenses to people who can see. This is making the blind masseurs furious since being a masseur is just about the only job they can have in Korea. In response to this they have started rioting, holding up signs, fighting with police, and jumping off of bridges in acts of defiance.

Imagine the determination that requires. Even on a purely organizational level, getting hundreds of blind masseurs together on a bridge is a major achievement. Add in the rioting and it's like one of those identical twins conventions getting crashed by dozens of sets of angry triplets.

I wouldn't even begin to know how to train a seeing-eye dog to riot.