All in all the show holds up surprisingly well without our precious rose-colored glasses and the spirit of Mystery Science Theater 3000 lives on in RiffTrax, downloadable mp3s of Mike Nelson and company ripping on movies that you play along with the DVD or pirated VCD, but of course, you already knew that.

RiffTrax's take on more contemporary films is vastly more entertaining than the old robots taking on such heavy hitters as Joe Don Baker and Gamera. Boy, they really cut those guys down to size.

But for God's sake, please don't keep circulating the mp3s. They actually want to make some dough this time around!

A phrase I often hear is, "It's so dangerous these days that I can't even let my kids walk down the street alone anymore!" as if there was a time when it was a good idea to do that. Yeah, because pedophiles, rapists, and murderers are a relatively new phenomenon and weren't invented until the 90s. 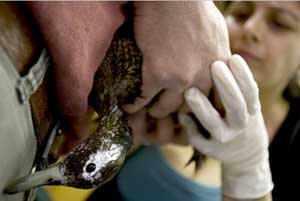 Duck genitalia just ain't what it used to be.I remember a time when the world was a kinder, gentler place, back when the mafia ran everything. There is no other time when rose-colored glasses are more effective than when remembering the way the world was X amount of years ago.

The fact is people are more polite today than they ever were. No one wants to be accused of doing the wrong thing so they'll overcompensate in ridiculous ways. Strangers will hold open a door for you despite the fact that you're 90 feet away. Thanks, guy, but I think I can handle this one.

People are so polite that they aren't killing each other as much as they used to. Violent crime rates have seen a downward trend since 1994 according to the helpful nerds at the Bureau of Justice Statistics.

As much as the TV news wants you to believe otherwise, the world, and by world I mean the United States, is becoming a better place. People are nicer, attitudes towards homosexuals are relaxing, and civil rights are blowing the fuck up. I question those who pine for the "good old days". You mean the days when women couldn't vote and blacks had to sit in the back of the bus and Koreans had to duel to the death just to mail a letter?

Nope, everything is a-okay in the US of A. Canada still sucks though.

Okay, don't laugh, but I enjoy going to Disneyland from time to time. Yeah, yeah, I know, I'm gay. I don't have a season pass or anything. Living in Southern California, where everybody seems to work at the park that pays the Minimum-est Wage on Earth, there are no shortage of people able to "sign you in" to the park for free.

There is also no shortage of whiners who complain that Disneyland isn't doing this or that they aren't living up to that. From burnt out light bulbs to chipped paint to trash cans that aren't perfectly themed to the land they sit in, there's always something that'll disappoint these "fans".

Of course, that doesn't stop these people, who wear so much Chinese-manufactured Disney bling that it makes 50 Cent look like a guy you'd want to share an elevator with, from visiting a place they profess to hate.