But what mom doesn't realize is that she is looking at the past through rose-colored glasses. Kid's cartoons have always sucked. The only difference is that we are remembering them as retarded children, and not the full-grown bank account-opening job-having adults that we should have evolved into.

It was always the same hack Korean animation meant only to drive children to incessantly nag their parents to buy the newest toys that the kids in the commercial had infinitely more fun with than we ever did.

If I had a nickel for every time a goon got excited about the prospect of ReBoot returning to television I could buy a whole goon island. It was a cool show when we were kids but get over it.

In case you hadn't heard, they make television shows for adults now.

Despite being the funniest goddamn thing on the planet MST3K never really made it big and was relegated to the worst status of all, cult status.

It became a vicious cycle. Since it didn't appear to do well, the show wasn't treated nicely by TV executives. It was placed in the worst time slots, scarcely marketed, and when it came time to do a movie, not shown in many theaters.

Since fans couldn't find it anywhere, they resorted to piracy, something we've never condoned here at www.somethingawful.com. I estimate that over 70 billion people watched Mystery Science Theater on a regular basis, but you'd never know it by looking at the numbers. 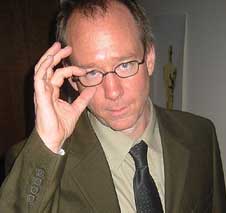 I don't know who has aged worse, Bill Murray or this guy.See, Joel Hodgson was smart. The second he figured out this thing wasn't really going anywhere he jumped ship and is now doing whatever it is he and Craig Kilborn do together all day.

It's always funny how smart, talented guys will stop doing the thing they are good at to pursue a career in the last thing anyone would ever want to see them do. Kilborn left his late night show to pursue movies. When was the last movie starring Craig Kilborn you saw? I rest my case. Joel Hodgson left MST3K and now he looks like the dad from Alf.

As a huge fan of the show, I'm surprised it lasted as long as it did. When your primary demographic doesn't buy anything, doesn't go anywhere, and lives only to find fault with everything that you've created, you're not going to be pulling down Kanye West ring tone money. It's a pain we know here at Something Awful all too well...

After taking off my rose-colored glasses it becomes immediately clear how hit and miss MST3K was. I watched one about a teenage werewolf and it was as good as remember it. Then I watched one about dinosaurs and throughout the episode I farted more than I laughed. But to be fair, I do fart a lot.

The skits before and after the commercial breaks were just as awful as ever. I understand they are meant to convey the personality of Mike and the robots and pull the whole show together, or in the early episodes, make Joel nervous about being on camera to the point where he argues with Jim Mallon about the direction of the show (what other direction could it have fucking gone?!), but I don't think a single one has made me laugh. But then again, it's better than anything I could do.