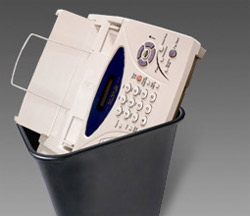 The remainder of my movie work has been for a company that produces straight to DVD science fiction, horror, and fantasy movies. They're sort of like the old Full Moon Entertainment, except one guy is the creative source behind every movie. He doesn't green light projects, he comes up with vague ideas and then hires writers and directors himself. He gets involved in the casting. I don't know if he's independently wealthy or just has some really crazy financial backers, but most of his movies are such low budget sleaze you have to order them from Amazon. They never show up in a normal store or rental place.

I call him Jesus, because he looks like what Jesus would look like if he was never crucified and instead moved to Malibu and tanned nonstop. He pays like shit, but he spends money like a maniac. He will fly out to Chicago to look at a script because, in his words, "I don't trust emails." I offered to fax him a script once and he cryptically told me, "No, I don't use fax since I got the bird fax." His assistant later told me that "the bird fax" was a fax he received every day for a week straight at the same time. It was just a clipart picture of a cardinal and no text. Jesus attributed this fax to "Indians" and by Friday his fax machine was in the garbage can.

Jesus likes to call me at around two in the morning (he's on the West Coast) and demand to know when I can write something. He then offers me a series of premises in the form of a combination of two things. One of these things is usually a part of a woman's anatomy.

Here is the most recent list I have discussed with Jesus, exactly as I wrote it down during our phone conversation:

That list led nowhere, although he did express a future interest in "nude police force" which he thinks he can film "cheap as fuck in Hungary." Eastern Europe is his favorite place next to California. Any time it comes up he raves that "girls will show bush for nothing" in movies he films there. He considers the women of Hungary and Romania to be compliant goddesses, while American girls are divas who "really make you pay for the goods."

I've written or rewritten five films for Jesus. My favorite is a Silent Hill rip-off he had me rewrite to include a hospital full of "big tittied ghost nurses." The original draft I was handed featured a SAW rip-off doctor murdering people for revenge. I rewrote him, at the request of Jesus, as a "Satanist plastic surgeon" who "conjures a dimensional miasma on the hospital" by performing evil cosmetic surgeries.

I'm particularly proud of a scene in which the surgeon pumps liposuctioned fat into a woman's face until her head swells up to an immense size. She then goes on a rampage chasing the cop and female doctor protagonists until they trap her in a pressure chamber and crush her to the size of a peanut. I'm looking forward to seeing that scene realized in film form.

I am currently working on a project for Jesus and he has given me a lot of freedom. "Tits and a monster," he said. Those were his only stipulations.

It took me about a week, but I think I've finally got a monster that will scare the shit out of him...