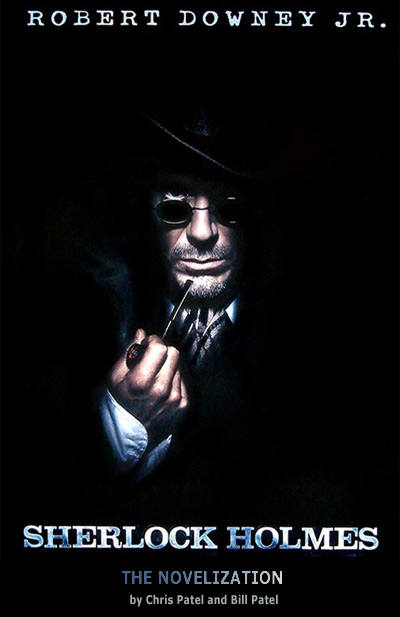 Sherlock Holmes doing rude pushups for the picture of hisself in the mirror. His body flexed to turgid shape. The photograph lilted out an tune of forbidden music from the far east. Cocaine was everywhere in great mounds. The door opened suddenly.

"WATSON!?" Sherlock holmes got up and knocked over a chair. "YOU BACK."

They hug each other very long. A bird is chirp and London street go on with their dealings. A Bobby seen in action patrol.

"This is best news I have a mystery," Sherlock Holmes say. "Mystery is this: Waddafuuuuuuck!"

A mechanical bat come down from big ben. There is a pentagram and a strange symbol within the star on the bat. IT break out the window!

"This hairy rondo is a pest," agreed Sherlock holmes and swattedit. "It is not a ghost, fearsomely I detect its clues on the mechanism."

The clue was found in the smashed bat. A rondo of courage is conceived in that instant. Watson has double pistols and Sherlock holmes weild a axe with a conceal gun of small stature. 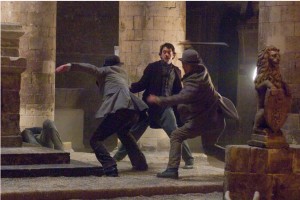 There was an iron warrior in their midst. Sherlock holmes took up the table and tossed it across the gully.

"LOOK OUT WATSON" he said and ducked.

The iron warrior clanked around and spit out bullets from a pistol in its compartment. There was no escaping its reticule. Watson was doomed. He was going to be shot. The bullets crept closer. Watson could feel his life before his eyes. He did not want to die.

"NOW WATSON!" holmes said and swung in on a rope.

With gusto the iron warrior turned to confront a new challenge. Watson ran out from his hiding place as bullets started to fly around Sherlock holmes.

"I TOOK MASSIVE DOSE OF COCAINE!!!" Holmes laughed with joy and kicked the iron warrior with both boots. The joy faded as he bounced off and lost his hold on the rope. His ruse had not succeeded on this devious device.

The iron warrior laughed and looked down and pointed his guns down at Sherlock Holmes and prepared to deliver a fatal strike.

IT WAS WATSON! He had a candlebra and he struck the iron warrior in the head. The candlebra was made from heavy iron itself and was so heavy it put a dent in the iron contraption. Sparks were flying out of the dented part.

"I don't thinks it's a ghost" observed shelrock holmes. "Like the bat made from device."

They look down at man of iron who is looking back with dead mask oil coming out of joint. There is a moment in ironic confrontation when Robert Dowy look at the mask of IRONMAN and he smile and look at his camera. Watson say "GET OVER IT BUSTER WE HAVE TO HURRY."

"It is moyardees work agrees Sherlock holmes. Now at least we know it was he who was responsible for the seven previous ambushes of mechanical dastardry and possible three accidental incidents."