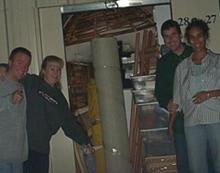 Party in the storage locker, PARTY IN THE STORAGE LOCKER! These people are (for some reason) really excited about cramming all of their worldly treasures into a small shack. I, however, am not so thrilled.Since I've been quite the failure in life as of late, this week I prepared to put the majority of my belongings into storage. Not having enough money to pay rent was a factor in this decision. I was surprised to discover that renting storage space is relatively affordable, especially considering that even burned-down murder houses built on the quarter acre remnants of a of a poison-soaked, radioactive landfill sell for approximately $1 million dollars here in Southern California. And I'm not even exaggerating. Much.

I was also surprised to learn that the vast majority of my belongings consist of either DVD's, pieces of paper on which I've scrawled "DO THIS!", or worthless crap, but I won't go into that. Why did I keep a broken doorknob in my bathroom drawer for a year and a half? What I was I talking about? Oh yeah, storage space is cheap. So cheap, in fact, that I'm dead set on living in my 10x10 high-tech steel barn instead of paying rent for another one of these fancy, ventilated apartments. The way I see it, living in storage is better than prison: you get more space and there's no rape. Plus you don't have to worry about your neighbors making too much noise, since most of your neighbors are antique furniture, dead bodies crammed into steel drums, and boxes upon boxes of magazine subscription cards horded by obsessive-compulsive nutjobs.

People put way too much value into stupid material belongings, thus the need for so many storage places to begin with. And robbers. Sure, everybody needs a few essentials: a bed, a computer with at least a Voodoo 2 3D card, and a copy of "She's All That" on DVD, but all the other things should just be dumped in the trash. While I have nothing against the loonies who save every receipt for everything they've ever purchased or collect AOL disks for fun, I do have a problem with old people who waste hundreds of dollars on dust-collecting knickknacks and then cry their little old eyes out when they get ripped off. 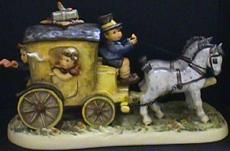 See, recently a guy by the name of Stewart Richardson pulled off the eBay Crime of the Century. He spent like four years building up his positive feedback rating, filled with comments resembling "AAAAAAAA++++++ THANKS QUICK BEST EBAY BUYER CLIMAXED UPON OPENING PURCHASE RECOMMEND TO EVERYONE I'VE EVER SEEN IN THE HISTORY OF MY LIFE WILL DEAL WITH AGAIN THANKS FEEL FREE TO USE MY DAUGHTER AS YOUR SEXUAL PLAYGROUND!!!" Then last month he put tons of expensive figurines he didn't actually have up for auction, took all the money (estimated to be anywhere from $220,000 to $500,000), and ran, leaving his sagging wife behind to deal with some very tersely worded complaints.

But you know what? I don't blame the guy. If you made your living selling stupid little porcelain figurines to people with obviously far more money than brains, you'd probably go insane too after five years of violently arguing with senile seniors about the condition of different variations of two-inch chunks of plaster depicting squirrels dressed up as 18th century British orphans selling newspapers.

Some of these people lost thousands of dollars, and for what? Tiny little piles of crap they'd put in a display case or in a box and forget about. Meanwhile children are starving in Eitaroionaioania and blah blah blah, I'm just mad I didn't think of this scheme first! I'd be living large, you go girl talk to the hand! So good work, Stewart Richardson, thanks for making eBay an even more fraudtastic place to buy worthless garbage and walk away with bags of ill-gotten personal gains in the process!

Anybody want to buy a rare doorknob? I looks kinda broken, but it's really just a limited edition. Yours for only $10,000! It's COLLECTIBLE, so you know it's worth tons of money!

I'm not sure what that last panel is supposed to mean, the only thing I can think of is that the last line Fireman says in the last comic is the first line he says in the first fireman comic. Maybe whoever wrote Fireman Comics is trying to say something about the cylindrical nature of existence? What goes around, comes around? Or maybe Fireman is just retarded. Whatever, I'm just happy there are no more Fireman antics to be had, most likely!