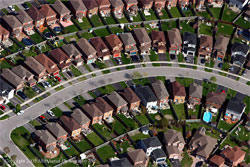 The suburbs are beloved by aerial photographers with OCD.Two weeks ago I took my traumatic first steps into the suburban lifestyle. My fiancée and I relocated from our increasingly cramped apartment in Chicago to one of Chicago's many suburbs. It was a difficult decision to leave the city that we both love, but obviously if the city loved us back it would do so by offering a real estate market where houses cost less than a million dollars.

We left the city, fleeing from a neighborhood that had, after many years as a ghetto, finally begun to gentrify. For those of you not familiar with that term, it is the process through which non-white neighborhoods are gradually transformed into white neighborhoods. If it makes you feel better, you can pretend that it's something more complex involving economics and pie charts. Something about the number of times a pimp gets shot in the throat in an alley and the number of SUVs inside fenced parking. I'm a little rusty on my econ 101.

The process of extricating ourselves from the city and our overcrowded apartment was not particularly pleasant. It took a month to pack our huge heaps of junk into boxes or throw away the unbelievable amounts of shit we had accumulated in our closets. 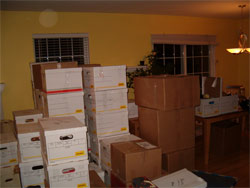 Our house was full of boxes...and GHOSTS!Nearly 30 Japanese porno DVDs. I know that sounds like a travesty, but they were review copies that I had stuck in the closet because I had either reviewed them already for SA or passed them over for a review. Making matters worse, the ceiling of our closet had exploded in a freak lightning strike and everything in that closet was covered with an extremely fine (and probably toxic) layer of dust and grit. Cleaning that stuff off of clothes and old books was about as fun as sandblasting my testicles, trying to get that shit off DVDs without damaging them was out of the question.

Our hideous couch. I have seen superfund sites cleaner than that thing. There were stains on the cushions that looked like henna maps or like some asshole had just whipped used tea bags across the whole thing. Even worse, a cat peed on that couch. Nothing smells more horrible than cat piss. Don't even try to tell me otherwise. I will hotbox the toe of a corpse dredged out of the Amazon before I'd take a deep breath of cat piss vapor. Nevertheless, someone was walking off with the cushions while we were still bringing down the feet for the couch.

The hobo prize. Over the years I had amassed a respectable collection of fine liquors. Rather than take all of that collection with us, I decided to dispose of any bottles that were less than half full. I could have just dumped them down the sink, but we had a crazy hunchbacked mumbling hobo in the neighborhood that tore through all of the garbage and knew everything about everyone. I wanted him to remember me fondly. So I placed all of the booze in a big plastic bag and then placed that in a box. I left it next to, rather than inside, the trashcans behind our apartment as a sort of farewell and peace offering to the hobo that probably knows my Social Security number. There was easily two gallons of top shelf hard liquor in that box, so I either transformed him into the hobo equivalent of Bill Gates or I killed him with kindness.

Once all that stuff (and much more) had been junked, the move was smooth sailing. Well, not smooth sailing, but it wasn't too bad. With the help of a moving crew, the boxes of stuff that had been in our apartment were in a house somewhere else. Since that first night in the new house, staring at the teetering Tetris heaps of boxes in our downstairs, I have learned many things about home ownership and suburban living. You can expect to spend a lot more money than the ridiculous amount you just spent on the house. Once you're moved in, you'll realize you need all sorts of things you never needed in an apartment. 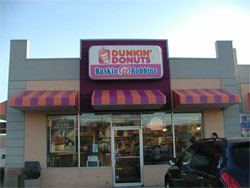 Yeah, I'd like a cream-filled double glazed eclair with a large sundae.The obvious big purchase would be a washer and a dryer, but then you've got a lawn mower, weed whacker, vacuum cleaner and some sort of weapon to defend your new house. My first choice was a gun, something huge that could blow dolphin-sized holes in engine blocks, but I hate waiting for anything so I went to Home Depot and picked up a trident. They like to call it some other nonsensical word like a picklefork or something, but it's a trident. Dare to trespass on my new property and you will find yourself pinned to a tree by my mighty war trident! As an aside, Home Depot really needs to work on stocking more of those weighted nets you can throw at people.

Mowing my own lawn for the first time was a real shock to the system. Not that it was that horrible, although it was that, but mowing my lawn did not cause brick planters, tulips and statues to shoot up out of the ground like all my neighbors had. My next door neighbor has at least half of their entire lot devoted to brick planters for flowers, trees and gardens. If they could somehow put their driveway in a brick planter I'm sure they would. I wondered how every person on my block could have such a fabulous lawn while mine was a mulched heap of dandelion stems. Then I realized that racial stereotypes are true: everyone in my neighborhood is Mexican and they all have green thumbs.

It's probably not fair to assume that they're all gardeners and groundskeepers, but I'm going to go ahead and do that anyway. Having made an ass out of "u" and "med," I was even more confused. I would have thought they'd have really plain yards after planting roses all day long. Like chefs who come home from cooking at a three star restaurant to chow down on a microwave hot pocket. But these guys are animals. They have grass the color of an evergreen forest and not a weed in sight. Their patios and walkways are like some Babylonian hanging garden or French estate. Every morning my neighbor has some new tree or elaborate brickwork decoration. It's maddening. I couldn't keep up with that degree of landscaping if I were doing it in the Sims. 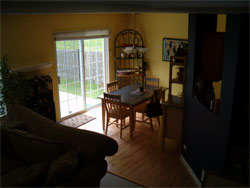 The boxes are now gone, but the ghosts still lurk in the cameras!Probably the most horrifying thing I have learned since moving to the suburbs is that suburbia conspires to make you fat. In the city, going out to eat is an undertaking. You worry about losing your sweet parking space. You have to bust out Google Maps and navigate your way through bumper-to-bumper traffic and then either risk a ticket by parking in a tow zone or pay ten dollars to park in a private lot.

The suburbs are laid out as a giant feeding trough. There is one restaurant after another, after another, after another and they're all on the same street. In some places they blur together into one super restaurant. There are ice cream shops inside doughnut shops and hot dog stands inside fish shops. There is a Dairy Queen so close to me that I could probably pay them to subscribe to Blizzards. You sacrifice some of the variety and a lot of the quirkiness of the city's superior dining establishments, but you gain a huge lardy wheelbarrow full of pizzas and subs and whatever other cheese-covered food your arteries could crave.

Two weeks in and the towers of boxes have at least been moved into places where you're not supposed to sit. The process of unpacking them all will be akin to excavating a pharaoh's tomb, but we're settling in. Our belts are loosened, our lawn is shameful, but god damn it all, I like the suburbs.