Man, I'm sick for a few days and before I know it, I'm dead. That'll learn me.

Anybody who has been keeping up with the gaming industry has recently noticed a deluge in screenshots from Monolith's upcoming online robot-combat-in-space-super-secret-spy-action-thriller game, Tex Atomic's Big Bot Battles. Every legitimate gaming news site in the known universe has at least 500 "exclusive" shots of this upcoming title from Monolith and Real Networks, which of course explains why Something Awful doesn't have any. I'm starting to think that Jason Hall doesn't like me for some odd reason. Oh well, SA's motto has always been "when we don't have any news, lie about news", so I took it upon myself to find my own screenshots of the upcoming Lithtech title! Check it out! 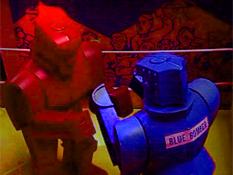 Click for a bigger picture, although I don't recommend it.

As far as I can tell, the Lithtech engine was created solely to remind the gaming population that the visible light spectrum includes a wide range of obscene colors. Almost every single screenshot from Sanity and Tex Atomic's Nuclear Stampede Robot Underwater Beetle Rodeo look as if somebody implanted dynamite inside a clown's rectum and used the remains to paint their models and textures. Everywhere you look it's like all the colors of the rainbow met and beat the unholy crap out of each other.

Now I'm aware that scientific studies have shown that people respond the most positively to bright colors, but some of these screenshots are just ridiculous. I sure hope it's not a case of "injecting 17 tons of color to create gameplay", as that method has never worked in the past and will probably never work in the future. I am also aware that Monolith is targeting the "general gamer" with Jumpin' Tex Avery's Super Crazy Robot Hairdressing Salon, but what "general gamers" play these kind of games? The average gamer wants something simple and easy to play that maximizes social interaction. This is why online RPGs are so popular with female gamers who make up more of the "average gamer" population than males. Do the same people who buy Cosmopolitan Makeover want a game with huge battling robots? You got me. Fortunately, I've got better things to think about, such as where my damn copy of Sanity is.

All I can say is "Come Visit Fabulous FAKE Las Vegas!" You won't regret it. Well, you might.

While I was sick, I got the most supportive and cheerful emails imaginable.

From: cliff yablonski
Subject: what the hell's wrong with you?

where you been, jerk? you have updated your stupid website in a few days. I hope you haven't died, because then I won't have the pleasure of kicking your scrawny white ass myself. I've got two brand new pages of people I hate up on my site. Post the link or it's doomsday for you and your idiotic cat.

Who am I to question Cliff Yablonski? Head on over to his webpage before I get a bowl of Spaz soup delivered on my doorstep!

I'm going to spend most of today catching up with the email I missed while I was deathly ill, so if you sent me something within the past week or so, expect a response soon.

Oh yeah, if anybody wants to participate in extracurricular activities, here's the messageboard for the American Skinhead Society, a bunch of neo-Nazi racist bigots. Have fun!