That's Why You Never Hire a Skeleton

"Look," I said. "You've got a tough life, but you're a fighter. The company picnic is tomorrow and I'll come pick you up in the morning. We'll have a great time! That's a promise. You can be my partner in the sack race!"

On Saturday morning the smell of death never smelt so alive. Mr. Marrow was full of pep, laughing himself silly all along the drive to the park where the company picnic was taking place.

"Save some energy for the sack race!" I jubilantly demanded.

I watched Mr. Marrow closely at the company picnic. He was full of fun quirks and odd behavior traits. He was constantly picking through trash bins for chicken bones, which he would then pile up neatly behind a tree. Occasionally he would sit calmly as though listening intently, only to jump up screaming and throwing his arms around. In short, he was the life of the picnic.

When it came time for the sack race, I felt good having him as my partner. I lowered my right leg into the sack and he lowered his bony left leg in. At first he tried to fight the sack, kicking around madly and then tugging at it with his arms, but I was able to calm him down and focus him on the goal of winning the sack race. I was confident the two of us would have no trouble leaving the other teams in the dust of defeat.

When the air horn sounded, we took off like lightning through the park, hopping a trail towards victory. Mr. Marrow was oddly focused and his laugh mutated into an almost athletic breathing. We easily gained a sizable lead over the competition, but our voyage would not go smoothly. With the finish line in sight, no more than a hundred feet away, we tripped and fell. Mr. Marrow shattered into a pile of odd bones. Looking up while pressed against the ground, I saw directly into the empty eye sockets of his decapitated skull. It was as if he was truly gone. 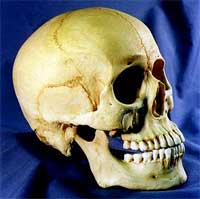 I jumped up and shouted, "C'mon, buddy! We can still win this."

There was no response, just a lifeless assortment of bones scattered on the ground.

"C'mon, buddy!" I cried again as I leaned over and started loading his bones into the sack. "We've got a sack race to win!"

With the entirety of Mr. Marrow in the sack with my right leg, I took off towards the finish line and the sweet taste of victory it offered. We lost the bulk of our lead, but we still won by a slim margin over the other teams. We won – together. It was a thing of beauty. It was just too bad Mr. Marrow wasn't alive enough to celebrate the victory with me.

After the picnic I carried the sack containing Mr. Marrow and placed it gently in the trunk of my car, vowing to pick up the pieces the next day.

"The copy room has never been so lively," he responded.

That Sunday I carried the sack of Mr. Marrow's bones to the office copy room and spent the day gluing him back together. He seemed to remain lifeless, but then I remembered that crazy medallion of his. Once I put that around his neck, he jumped back to life laughing himself silly.

On Monday morning a different kind of deathly stench was in the air. And an eerie quiet as well.

"Where's Mr. Marrow?" I demanded to my boss.

"I had to let him go. I called him this morning and asked him not to come in."

"Why? He was just starting to fit in!"

"He faked his résumé. He never worked at Olive Garden!"

"I went there with my wife to eat, and while there I had a conversation with the manager. It was mostly over the service, but while he was there I asked him about Mr. Marrow. He never worked at an Olive Garden."

"I don't believe it. I can't believe he would lie on his résumé like that!"

"They're all liars at heart, though they don't even have hearts. Forging a résumé is no stretch for a liar. I guess that's why you don't hire skeletons."

"Plus his arm flailing came dangerously close to groping on a number of occasions, and the last thing I want is a sexual harassment lawsuit in this office."

I can't say I didn't mind the peace and quiet, or the relaxed attitude of the new copy room worker. I also didn't mind the lack of the stench of death permeating the office. Skeletons are a lot of things, just not office workers. Mr. Marrow tried his hardest to penetrate our world, but he just wasn't ready for it, and we weren't ready for him. Still, I'll always think back to the good times we had together, like our victory in the sack race, the moment we bonded in his apartment, and that crazy laugh of his. If anyone truly knew how to live, it was him.