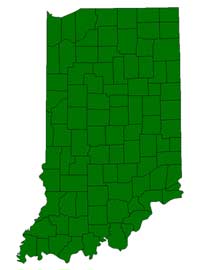 It doesn't get anymore exciting.One of my least charming traits, aside from me being a stupid idiot, obnoxious jerk, ignorant un-American scumbag, hateful maggot, pathological abuser of exclamation marks, and wretched shell of a man, is that I am from Indiana. Not only am I from Indiana, but I have also spent 22 grueling years as a denizen of the Hoosier nightmare, molested each day by the cornstalk hands manipulated by the dark and malicious spirit of the state itself. While it's not necessarily a handicap on the level of, oh, say, being on fire or being autistic while drowning in quicksand, it is a shame that will haunt me for the rest of my adult life.

I'm not going to deny that I've bitched and moaned about Indiana more times than I can count, which sadly isn't very high due to the woeful inadequacies of Indiana's educational system. And yes, Zack has also complained about Indiana once, but his argument, while completely true, holds no credibility due to the fact he has never been a Hoosier. I freely admit that I've badmouthed Indiana at every turn, so this article will be nothing but a tour through the land of redundancy for the two of you that actually read my articles regularly. I'm writing about Indiana once more, and hopefully for the last time, because something magical is happening. I am leaving this foul state for the possibly less foul state of Washington, which was named after George Washington, a famous American and the first man to cross a river, a feat once thought impossible.

For those of you wondering what a Hoosier is, and I'm referring to you lousy foreigners, it's a nickname for people from Indiana. It derives from an old Indian word that roughly translates into "you poor miserable idiot!" Again, that's a rough translation, because I don't think Indians had exclamation marks, and if they did, they hid them well from the white man. That being said, while I will remain a Hoosier on a technicality, I will no longer be a resident of Indiana. Thusly, I will be a better human being.

Often times I wonder how this whole Indiana thing got started in the first place. Was it a bad joke using us as the punch line? Are we some kind of experiment gone wrong, a nightmarish race of demon people with concentrated cream corn for blood? The answer mirrors the state in its complete uninspired boringness. The State of Indiana was founded in 1816, signaling a brave and triumphant stance against standards on the part of our developing nation. Since 1816 Indiana has evolved little, if at all. In the 1970s, we finally had the last of the ice from the ice age melt off. In 1985 the state took a brave leap forward when the government agreed to finally provide rural free delivery, granting us mail for the first time ever. Over the next decade the giant hellhole was blessed with a total of five paved roads, and several highways allowing people to drive through the state instead of entirely around it. In 1994 neighboring states agreed to stop throwing garbage and sewage over the border, a change that actually displeased many Indianans since the service was provided to them for free. Currently, Indiana boasts all the amenities of a boring state with no self-confidence. 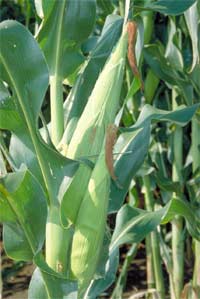 LEAVE ME ALONE!!Although Indiana is in a lot of ways a land of endless corn, it has other features as well. For instance, in the northwest corner that has served as my home, there are tons of factories and mills that pump the air with fun chemicals that smell like so many dead helicopters. Then there is Gary, Indiana, which has routinely been honored with the title "Per-Capita Murder Capital of the United States." My hometown has two claims to fame. A couple years ago our college basketball team actually won a couple important games only to lose at some even more important games. A few years after that, one of our proud citizens was arrested for stealing chickens, which he would then take to a motel to have sex with. His inspiring story made national headlines, allowing Indiana to bask in the spotlight. Had he been a woman instead, he certainly would have gotten a Lifetime movie out of the deal, too. Corn does funny things to a man's soul it seems, and Indiana provides ample proof. What else does Indiana have? Absolutely nothing. But there is solace to be had in the knowledge that just beyond the endless corn horizon, there rests a better world.

Even the governor couldn't handle the stress of navigating this maize state of detestation. The burden of knowing he was captaining such a doomed ship simply proved too much for him, and so his heart exploded in grand fashion, sending cardiac shrapnel into the nearby walls. Obviously he was superstitious, which was why he waited until he was in Illinois to unleash the heartfelt fireworks. Some people believe that to die in a horrible place means that the soul will never find its way to heaven. To die in Indiana is to trade one hell for another.

Of course Indiana is symptomatic of a larger problem: the American Midwest. This entire region seems hopeless and dead, like a giant proverbial bear trap for our giant proverbial bear legs. Like a rut, people who visit the Midwest get stuck and lose all will to free themselves. They meet unpleasant girls, get them pregnant, and raise unwanted families to keep the area thriving with a self-hating population of doomed souls. Some people might take offense to this, citing that the Midwest is the breadbasket or the heartland, but I disagree. If it is a breadbasket, then the bread is stale and possibly moldy, just like the product of a bakery run by mummies. America's heartland? Hold a séance and ask Indiana's former living governor and current ghost governor how the heartland is ticking. If he doesn't vomit ectoplasm on you or make your head rotate 360 degrees while spraying blood out of your mouth like a fire hose, he will probably tell you that it's not doing so good.

Some people might call this place home, but those people are all criminally insane as far as I'm concerned. Although I've seen a lot of the cornfields give way to an equally hopeless suburbia, Indiana has always remained a desolate farmland. Even with the urban sprawl, the cornfields remain resilient, wrapping around the primitive cities, waiting for the chance to swallow humanity whole. Every time I look out my window I swear they move in a little closer, like they're waging a silent war against us. First they will consume the land, then our bodies.

If Indiana and the Midwest represent a problem, then there must be a solution. I am no scientist, so my answers aren't likely to be embraced. However, as an outsider thinker, I would like to recommend dividing the continent into two sections: USA and USX. Everything in the middle will be lost to the vengeful sea, or given to the Indians who might actually put it to practical use. I think sinking it would probably be more cost effective and continue our fine tradition of screwing over the Indians. Without being bogged down by all that crap in the middle, the former west cost, now United States Extreme, and the former east coast, now United States of America, could move ahead towards a glorious future.

This may sound impossible to pull off, but that's dismissing the infinite potential of the human race. Let's not forget that we've built canals, giant pyramids, skyscrapers, and wrapped concrete grids around entire continents. After that, flooding the middle section of our country should be child's play. I have faith in the 10% of the human race that isn't mentally incompetent, so I believe we can pull this off. But solutions won't do us any good until we admit we have a problem. I hope that we can do this soon.