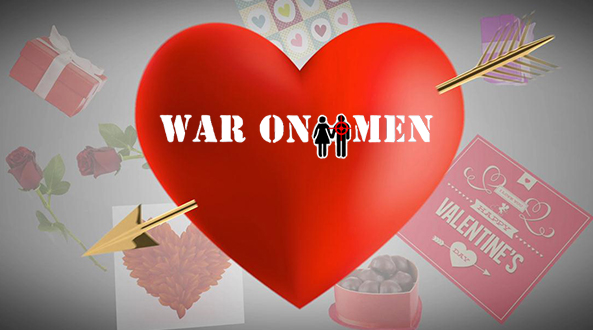 Greetings, right-thinking thitizens! It is I, Michael Thernovich, with another shocking bit of reportage! Were you aware that in America, we've set aside an entire day for men to be brutally cucked by women? It's called Valentime's Day, and it's on the top ten list of cuckoldry risks for men, right behind alimony, child-support, and tipping waitresses with less than a C-cup. As America's #1 Cuck-buster, I set out on this insthidious "holiday" to save as many men from the dangerous grasps of the females as I could!

5:45 PM: Witnessed a numale beta snowflake grasping the palm of a female. A.k.a., he was being cucked out of his precious hand warmthh! I quickly sprinted betwixt the pair and broke this obvious display of emasculathion with a knifehanded judo chop. The male, obviously hypnotized by this devilish vixen, told me to "fuck off" instead of thanking me profusely for saving him from her clutches! Walked away more resolute than ever, thinking how many more men need to be educated about these vicious creathures.

6:15 PM: After getting a hot thip from one of my many egg-avatared informants, entered famed italian restaurant Chez Louie through the bathroom window. I deftly applied my chef's disguise (a.k.a. a garbage bag filled with spaghetti), and walked onto the floor. Just in time, too, as I quickly witnesthed a male nearly get cucked out of his beautiful diamond ring!

The naive male had misplaced it in a glass of champagne, which he was about to serve to his fiendishly wheelchair-bound date. I lept into action, hurtling acrossth two tables until I successfully knocked the glass away with a basthball bat shaped like a massive red pill. The female began to leak precious moisture from her eyeholes, which I collected in a ziploc baggie for further analysis. Why do so many members of the weaker sex exude this moisthure around me? Perhapth they are allergic to my highly blackpilled pheremones!

7:05 PM: Masturbated in the bathroom of a IHOP.

8 PM: Nestled safely behind some bushes, posithioned in my patented "Thernocrouch," withissed today's most shocking display of cuckoldry yet: a man about to give his freezing-cold date his winter coat...FOREVER! After performing a flawless combat roll across a busy four-lane highway, I pulled out my patented "Thernoswich" lighter (I'm a fucking lawyer don't you dare try to steal thish) and set the garment ablaze, providing warmth for both me AND the male!

Unfortunately, warmth was also provided to the female. Thacrifices must, at times, be made for greater good.

8:36 PM: While taking respite within a nearby tavern, a woman approached my position, inquiring as to whether or not I "came here often." Obvious Shillary/Sorosian NSA spy. "Begone, harlot!" I thcreamed, before throwing a glass of beer in her face!

That's right, thitizens: I, Michael Thernovich, was cucked out of my precious Miller High Life! Shamed, I pulled out my "bag of hiding" (a large paper sack with the phrase "bluepilled libtard" on it) and threw it over my face. "DON'T LOOK AT ME!!!" I wailed from within my ignominiously-fibrous prison, "DON'T LOOK AT MEEEEEEEEEE!!"

9:05 PM: Masturbated in the bathroom of a Waffle House. Happy Valentime's Day!