An Open Letter to Concerned Mothers 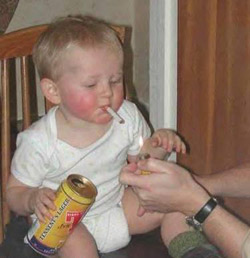 Per your instructions, I have devoted a good deal of time and energy to thinking of the children. To this date you have not identified any of these children specifically, nor have you outlined the content of their character, forcing me to draw certain conclusions about them from your tone of voice.

I have inferred from your concerned tone that these children are at the very least not evil children, as you do not seem to view them as any threat. Were these children hammering at some bulkhead, the only thing between us and a gory death at their hands, I believe you would sound more panicked.

No, your tone has been one of abstract concern, and seemed to be directed at the wellbeing of these children, both mental and physical. I can certainly sympathize with your point. We live in a dangerous world and at a dangerous time. I would be hard pressed to come up with a group of people more at risk in this world than children, other than perhaps quadriplegics. Invalids certainly constitute a significant subset of children and are therefore not worthy of special consideration.

What threats might face the children? This is the topic which I have afforded the lion’s share of my thinking. To wit, I have devised a number of scenarios which relate to imminent and avoidable peril for the children. I hope you find these scenarios educational and helpful.

A stone balanced precariously on top of a door

The stone is approximately eight kilograms in weight and sharp-edged. It has been placed atop an open door providing entrance to a room containing something desirable for a large child.

For the purpose of this scenario I have imagined a kindly grandfather and a birthday cake. The grandfather shouts, “Child, come here! A sweet brown cake awaits you in this chamber!”

The child becomes very excited and throws open the door. The stone tips from the top of the door and falls onto the child’s head, crushing the child’s skull and causing brain injury or death. This was an avoidable death. Had the grandfather warned the child, “Child, do not enter this room! There is a stone trap that can dash your brains!” the child would have been far less likely to become excited and throw open the door.

Also, placing the stone atop the door was, at best, an unfortunate decision.

A hip-hop song about being homosexual and biting authority figures 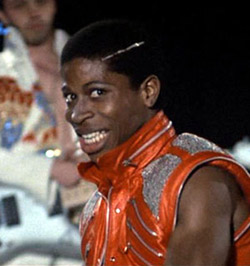 Imagine a cool rap video on MTV in which a cool rapper - just for the sake of completeness he is named MC Gaybites - raps about his life on the streets. He describes how to get by in the “ghetto” he had to be gay all the time and bite authority figures who tried to tell him what to do.

I imagine his hip-hop song going a little something like this:

Yo, yo, yo, I’m cool!
On the streets!
Hear my rap beats!
Being gay rules!
Heterosexuality is for fools!
Don’t listen to your folks,
don't listen to your preacher,
and when you get mad,
bite your motherfucking teacher!

The child hears this rap song and seeks out a homosexual lifestyle. He or she also develops a problem attitude at school and is frequently in trouble for attacking teachers and other authority figures. The child’s grades slip and they begin to use foul language.

Within a matter of weeks they are strung out all of the time on hard street drugs like crack cocaine, dopers, E-pills, or slice. Not long after that they die of AIDS. This scenario could be avoided by limiting the child’s access to explicit media or by writing a letter to the FCC. Parents could also educate their children about the advantages of abstinence.

A child stares at a photograph in a popular magazine for kids. In the photograph is a teenager on a skateboard doing a skate “stunt” and making an unpleasant gesture at a woman. This demonstrates to children, particularly those interested in skateboarding, that disrespecting a woman is “cool”.

That very day the child is as at home while his mother is cooking dinner. He skates into the kitchen, does an “Ollie” off the dishwasher, and flips his mom “the birds.” The child goes on to become a date rapist and the mother spends her nights drinking herself into oblivion. A family destroyed by a simple photograph that seemed cool to a hip marketing executive in New York City trying to sell a pair of sneakers.

This could easily be resolved by banning hate speech against women, especially as that speech relates to skateboarding.

There are many other scenarios I have entertained while following your advice regarding thinking and children, although these are much less fully realized.

For example, a child could read a book where a man marries a robot in the future and then this leads the child to do something bad. Another scenario could be that a child plays a videogame in which the protagonist, a trash-talking karate expert, ignores the early symptoms of Lyme disease, yet suffers no serious consequences. It’s not difficult to envision the serious difficulties this could cause for a child living in Appalachia.

Moms, I have spent a great deal of time thinking of the children. I hope this was sufficient for your needs, because I would really like to think about something else for at least a little while.