When ticks aren't fucking with people they're fucking with our pets. Having owned a series of satisfying dogs throughout my life, I've had more than enough run-ins with ticks. I like having dogs as pets for the same reason as everyone else: I love to pet soft things but am lazy enough to require that said soft things come to me when called. Dogs seem to fit the bill perfectly. There aren't many simple things in life that I can equate to the pleasure of nestling down in my recliner to pet a warm and loving dog curled up in my lap. On the flip side of the coin, I can't list many things that infuriate me as much as when my hand glides across the smooth surface of my dog's precious noggin only to feel a peculiar lump underneath his fur. The scenario has become so familiar to me that I don't even have to check a second time... I know a tick when I feel one. Everything is totally fucked at this point. My dog petting has been disrupted, I've discovered a parasite flesh-raping my beloved pet, and I now have to commit to properly removing the tick in a safe and veterinarian-approved manner. 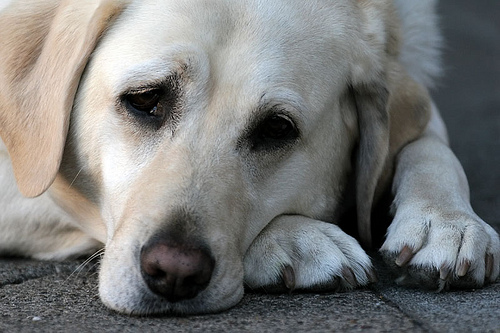 Ticks: responsible for a 26% worldwide increase in Dog Sadness.Tick removal is an absolutely shit task. If you ask your grandpappy or gram-grams how to remove a tick they'll more than likely tell you one of two things: hold a match to the tick or smother it in mineral oil.

The first of these old school methods is cruel and barbaric... to the host that is... I could give a fuck what the tick thinks about it. Why on earth would you want to subject yourself, a loved one, or your pet to the intense heat and subsequent pain of a burning match? You're already saddled with the misfortune of being a mobile buffet for this tiny asshole, now you have to injure yourself to get it to stop? Nay, I say.

The mineral oil method, in theory, seems like a more well-thought and consequence-free course of action. The idea is that the tick is not only temporarily smothered, but will also accidentally ingest the oil, causing it to back off, apologize, and write you a check for damages. The problem with this little trick is that the mineral oil can cause the tick to vomit the contents of its stomach back into your skin. That tiny wound on your head/arm/leg is now being pumped full of your own blood, any other blood the tick had eaten previously, and possibly a healthy dose of those diseases we talked about earlier. Pouring mineral oil on a tick is essentially the same as having the previously mentioned Vietnamese hooker snowball you. Delicious.

The two most current and acceptable methods for tick removal are to either grab it near the jaws/head area with sterile tweezers and slowly pull it away from your skin, or shoot it directly in the face with a small pistol. The latter of these two procedures will cause a great deal of damage to the tick's host, but is ultimately worth it and should serve as an example to other ticks.