Something very important has come to my attention: Todd "Goliath" Goldman, founder of trendy t-shirt slogan company David and Goliath and the supposed "brains" behind a number of its highly profitable works of art, is a creature of infinite wonder and intrigue! Somehow, through a miracle of time and space, Goldman apparently unknowingly duplicated a piece of art drawn many years previous by SA's resident artist, Shmorky, and then turned around to sell this divine coincidence for profit. How the heck did this happen?! Let's get to the bottom of this crazy mystery!

The story began early in April 2007, when my main man Shmorky received an email from a very nice lady. (The following is an artistic reenactment. Pretend it's just like on "Rescue 911" when the camera is all blurry and jerky and everything is in slow motion.)

Nice Lady: Shmorky, I think you're being ripped off! Oh, my heaaart!!
Cousin Pete: Oh no, Momma's hurt!

The drawing on the left was posted by Shmorky himself on his old webcomic, Purple Pussy, all the way back on September 19, 2001-- a mere 8 days after our nation's first ever tragedy. The familiar looking recreation you see on the right was produced by the art genius himself, Todd "Goliath" Goldman, and made absolutely and entirely out of thoughts from inside his own brain (you can tell this because it has TODD written in really big letters all over the corner of it). Everything down to the witty saying and exact same perspective on the bed and exact same curly squirrel tail came out of that beautiful big noggin of his. Oh Todd, you did a great job! Sign your name, buddy! Work that alphabet!

Around the time he found out, Shmorky went and posted a thread in the forums about this discovery, but at the same time, one must wonder: How did this amazing occurrence happen? How did two men, who both use the Internet and draw things on it, end up drawing the same thing several years apart? Some may say wizardry played a part, or perhaps sorcery. My own personal theory is that a Wiccan sandwich artist may have accidentally sneezed on Shmorky's meatball sub, damning him to a life of unending curses.

Around this time, some of our more observant forum members began to stick their slimy heads into the thread. What they found was an amazing amount of bizarre coincidences between Goldman's works and works from artists around the world. It was around this time that I really began to think... is it possible that we're dealing with a supernatural being?!

With a newfound sense of purpose in my heart, I tallied up the public's theories for as long as I could stand and charted it. Let's go to the graph: 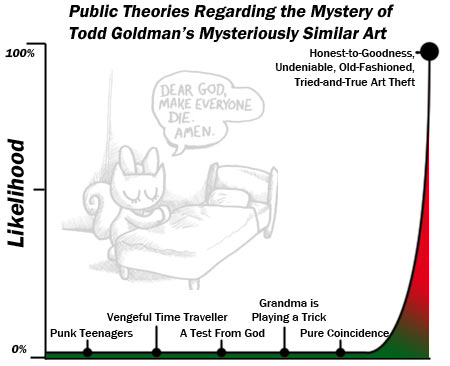 That's really odd, the Wiccan theory didn't even make the cut! What's even more puzzling, is Todd for whatever reason, fired back and called Shmorky names. What the heck??? He's like your soulmate, Todd! You guys drew the same thing! You have a bond! Why would you do this?! TODD, THIS IS A BEAUTIFUL THING, DON'T THROW IT ALL AWAY!! Oh God, why?? WWWHHYYYYY?!

On the 12th of April, and with the odds stacked against our hero, Todd employed the help of a "publicist" to register an account and post an apology on our forums. I really have no clue as to why, since it's so painfully obvious he didn't do anything wrong. At all. Ever. In his entire life.

CLEARWATER, FL, April 11, 2007- Popular post pop-artist, Todd Goldman who has made a career of making fun of the world with his sarcastic commentary and cartoon icons, has mistakenly used the design of an another artist in two of his recent paintings. Todd's painting, "Dear God, Please Make Everyone Die", was inspired from a drawing he received unbeknownst to him belonging to an underground web comic artist David "Shmorky" Kelly.

In addition to painting, Todd designs t-shirts for his clothing company, David & Goliath. Todd and his design team create and receive thousands of design ideas every month. It's no secret that Goldman creates a lot of his painting ideas from his t-shirt designs. Goldman says "I made a judgment error and didn't research the background of this particular submission. "My intention was not to copy Mr. Kelly. I have never seen his work before and would never intentionally knock-off someone else's idea."

Goldman has issued a formal apology to Mr. Kelly and has stated that he will not be using his design again in the future. As a gesture of good faith, Goldman has pledged not profit from his mistake. He will instead donate his proceeds from the painting directly to Mr. Kelly or his charity of choice.

See that, folks? "My intention was not to copy Mr. Kelly." He didn't set out to draw a thing just like that other thing, even down to the cute little animal and the cute little bed and the cute little saying! How could anyone think that he'd stoop as low as to plagiarize a fellow artist so blatantly? It goes without saying how entirely unethical that would be, and you should be ashamed for even dreaming for a moment that Mr. Goldman might be such an unscrupulous fellow! Look, it's all here in this Internet press release which you can believe with every fiber of your being! He says he "would never intentionally knock-off someone else's idea." That means he wouldn't ever sit down and think, "Oh boy, I'm going to draw this cartoon almost exactly as it looks here and sell it for big money!" because he's not the type to do that! We're talking about Todd "Goliath" Goldman here, people! Not some guy who steals stuff from people who work hard to make a living! Todd... "Goliath"... Goldman!

On top of all that, he's offering to give Shmorky the profits from his sale. Not the actual sale price of the painting, just the profits. You know, because Todd never did anything wrong (in his entire life, ever), he shouldn't have to pay out of his pocket! He can just give Shmorky his profits and forget about this unpleasant matter forever without losing a single cent! That spells "Grade A" businessman, right there.

Also, for whatever reason, it would appear to me that there is a rogue lawyer running around telling folks to shut up about Todd Goldman and to stop publishing wild accusations and "libel" regarding him. Certainly there are some trouble-making clowns out there who want nothing more than to put a huge, ever-thinking monster of original abstract thought like Todd Goldman out of business. I don't know anything about that, I'm too busy reading this article about the genius that is Todd Goldman's brain. That same brain that thinks up its own ideas. And I quote:

Goldman attributes his inspiration to his wittiness and weird sense of humor.

"I'm just wacked out of my mind. Things just come to me really quickly. I have complete ADD so I've never finished a book before. I haven't really watched cartoons or read comic books. It's just my witty sense of humor and my love to draw," Goldman said.

"I love my job, I couldn't imagine doing anything else, and I meet so many girls. I just did this to meet girls."

High five one of those chicks for the rest of the hardworking artists out there, Todd. Everyone back here on the ol' Internet is completely envious of your success, which you attained completely fairly and without stealing ideas from anyone else, at all, ever, in your entire life! Ever!