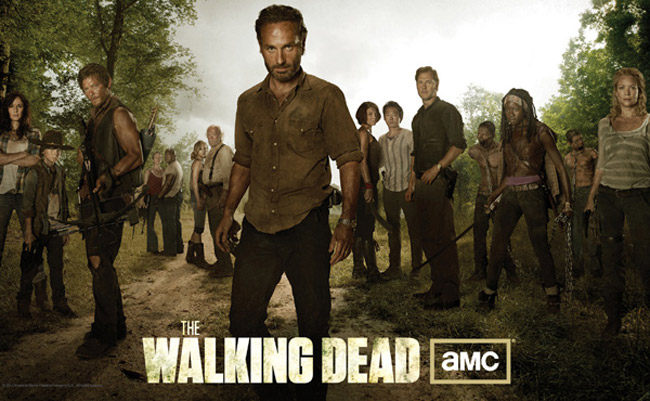 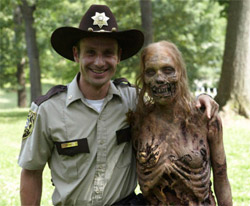 Well, now that the other show that will not be named is over, we can get back to solving the real mystery. Who killed everybody? Were your theories right? Was it the zombies or was it... now let this sink in for a second...man himself?

I have been paying attention to all the clues and I have some theories myself about this one.

But is it too obvious is what I'm wondering. Because there are also men in all those episodes. And aren't men really the real zombies? You can't have a zombie without a man, suggesting that inside us, inside our darkest inner self, is a zombie, waiting to be released by some sick act. Like being bit by a zombie.

Okay, on the last episode, Maggie, the good one not the weak housewife hussy, I'm talking about Maggie the very strong female character who has killed several zombies with guns and spikes, was looking for Rust. I mean Glenn. They were separated from the group and then from each other.

Then Daryl was in a house and he was saying something weird, talking in a weird voice, and Beth sat on his lap and said something about making flowers on her. I don't know what that meant and things got a little weirder. Then he threw a hatchet into the chest of one zombie and lifted the other one...hmmm...I might not have that all straight in my notes.

Rick was, I don't exactly remember what Rick and Carl were up to, but I'm sure it was pretty meaningful. Like maybe they went into a mall and it said something about mindless consumerism because the zombies were wandering around the mall. It's a reference to the great horror writer George A. Romero. Check him out some time.

Michonne, the woman with the samurai sword (also a strong woman btw, something this show has a lot of, folks) was helping Rick escape and there was a zombie. She had a great quote, like, "Look out, Carl." But maybe we are Carl and she is speaking directly to the audience like "look" at this show you're watching. It's called metafiction.

That brings me to my main point. Is Michonne the only character aware that she is in a TV show or does the Governor also know? He's still a thing, right? His eye patch symbolized the viewer's eye, which was blinded by the limited view of the action. The heads in aquariums thing also meant something. Maybe like he was being judged. 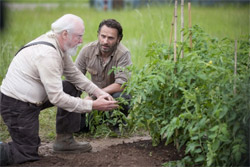 Alright, I admit it. I haven't watched Walking Dead in weeks. I don't...I don't even remember the names of most of the characters.

Randy? Rusty? No. Marvin? Did the old guy die? The second old guy I mean.

Shit. I was watching True Detective and just copying details about Walking Dead from Wikipedia. But, I'm going to get back on the wagon. Were they still dealing with the Governor or is he dead? Email me on that so I can pick this up again.

I can't remember much of anything other than the kid in the sheriff's hat. Think about the symbolism of that. He puts on his dad's hat which is a hat of authority. That means something.

Look, I know I screwed up, but I'll even bring back the Talking Dead recaps too. I know some of you said I shouldn't bring those back and wondered why I would waste my time recapping a show that recaps another show. The reason is obviously the guests and Chris Hardwick's easy-going charm.

We'll get through this, people. True Detective was just some one-off, flash-in-the-pan show. Eight episodes is like a movie or something. Walking Dead has at least 200 episodes by now.

True Detective is over. The Walking Dead is never going away.