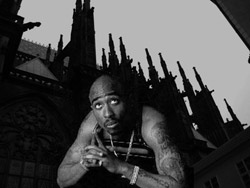 63 Large egg in a vent - what the fuck hatches?

64 A skeleton still has a booty

65 Sounds - bullets - an eagle coming at a nigga's face

67 Fingers thrown up - do not return (otherworldly tone) 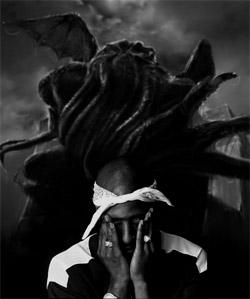 70 Hustler visits pawn shop of antiquities-asks that it accept a mixtape he has just made-old and learned owner laughs and says he cannot accept anything so modern. Man says that

and that he had fashioned the joints while dusted. Owner bids him shew his product, and when he does so shews horror. Asks who the rhymesayer may be. He tells street name. "No-before that" says owner. Hustler does not remember except while blazed. Then curator offers high price, but hustler fears he means to bite style. Asks fabulous price-owner will consult street.

71 Baby look like a Mexican what the fuck happen bitch (ancient evil?)

73 young money! the nightmare, plastic column of fetid black iridescence, oozed tightly onward through its fifteen-foot weave, spitting unholy rhymes and driving before it a spiral, rethickening cloud of pallid ass hoes. It was a terrible, indescribable thing vaster than any Hollygrove hood rat in a shapeless congeries of protoplasmic bathing apes, faintly self-luminous, and with myriads of temporary gang signs forming and unforming as pustules of greenish weed smoke blazed all over the tunnel-filling front that bore down on us, crushing the frantic busters and slithering over the bumpin floor that it and its kind had swept so evilly free of all haters. Still came that eldritch, mocking cry: 'A Mil-li! A Mil-li! A Mil-li! A Mil-li!'"

74 a homie enters flipmode: witnesses strange alternate ghetto where blood wears blue and fingers can be manipulated to spell out CrIP

Special thanks to the dark FYADs who discovered many previously unknown Tupac ideas.