Summation: TREES IN A CAN

What can I say, it tastes like plants. This is good though, at least in comparison to the last couple of drinks. Their website consists of a terrible flash thingy representing "Tales from the Crypt." Someone needs to inform them that that show hasn't been popular since the mid 80's, if ever. Luckily they also have a section devoted to their motocross team or whatever. Way hip and extreme. It frightens me a bit that one of their main advertised ingredients, l-carnitine, has a section on their site labeled "Animal Nutrition" and when you roll the cursor over it it shows about eight piglets suckling an enormous sow. What the hell? According to the can, though, it is a "maximum energy supplement," so I'm really happy because at long last I am drinking something that is not simply the middle of the road energy supplement. I am not, however, experiencing any sort of adrenaline rush from this drink, so I am afraid that if I were to be attacked right now by a very angry bear that I would be in pretty big trouble, let me tell you. 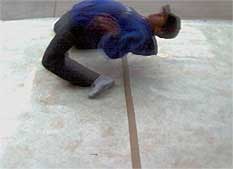 OH NO TOO MUCH KMX!!! PUSHING THE LIMITS TOO DAMN FAR!!!

This is the worst-tasting drink by far to this point. I think that the main reason for this is because it is trying really hard to taste like orange soda but failing miserably. It tastes rather like shoe leather rolled in grandma-sweat. According to the can I am instructed to:

After I read that I began trying to push the limits. I started to see how many carrots I could eat without throwing up. I got to 52 medium-sized carrots and then I started to barf orange mushy stuff all over the place and it sucked because I had the runs for the rest of the day. I don't know whether I should blame it on the KMX Energy Drink or not, but I feel like I did what the can told me and all I got out of it was a burning asshole. I want my three dollars back at once.

This one is thankfully the last because at this point my pee is neon yellow and I am shaking. It is also a good thing that it's the last because it tastes really, really bad. It doesn't taste as bad as the one made by Mountain Dew but it's pretty damn terrible. I don't want to drink any of these any more. I'm upset that I've even had so much of these fucking things so far. It's absolutely ridiculous. These cost like three dollars each also. I can't believe this bullshit. I am so fucking pissed; I'm going to write an angry letter. I feel sick. I haven't eaten all day so this stuff was ingested on an empty stomach. What the hell was I thinking. This tastes terrible. That's it, I quit. Fuck this.

I haven't learned anything. All of these energy drinks sucked ass and I am still sitting here like a dork in front of the computer. There are no guys with sunglasses snowboarding over my head or anything even remotely extreme unless it's HOT EXTEEEEEME VOICE CHAT which is utterly dumb and not really very full of hot, hip action at all but instead full of nerds who are rather shy and aren't saying much. I am more tired and am actually crankier now than I can remember being in a very long time. This experiment was a failure and I want to go back in time so that I can not drink all of the shit I've poured down my throat today and I am NOT talking about my "special time" with my little cousin Bobby. I am talking about something else. Something involving dumb energy drinks and my foolishly drinkin close to five cans of them..

I have to pee again. Great.