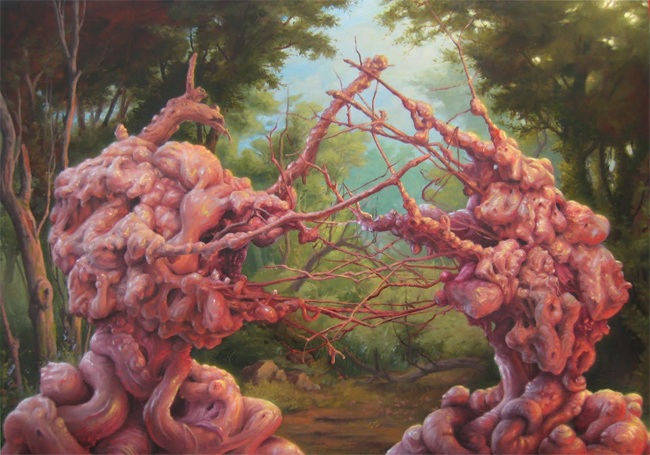 January 20th, 2017 is the day half the country has been waiting for eagerly and half the country has been dreading. We have a new president! The acrimonious election has given way to accusations of conspiracies on both sides and bitter feuds in government. Whether or not you like Donald Trump, I think we can all agree that something has to be done about the problems in America.

Good luck with that with all this bickering! Until we grow past our differences and out of our clothes, spreading exponentially across every surface, bones and muscle liquefying into a single gelatinous mass of fat and skin and loose organs, we won't be able to truly focus on our nation's problems.

Wages have barely risen in the past 10 years, more and more people are under-employed, and the well-intentioned Affordable Care Act has not made healthcare more affordable for most people. We can continue to blame one another or we can eject our skeletons violently from our bodies and fuse our tissue together into a writhing congruous mass of living viscera. Once we get past these impediments, we will realize we are all sharing one body that stretches across several states, spanning meat-hued bridges, drooping from cliffs, varicose and pure.

We will be unencumbered by petty conflicts of Trump, Hillary, or Bernie because names will be meaningless. We will move in all directions at once, our purpose to unite as we surge in wobbling flesh waves across the divide between the haves and have-nots. We will burst from the windows of skyscrapers like so many rising biscuits and droop in mottled hanks from tower tops and into sewers.

"Become the change you want to see in the world," Obama once told us as we jostled in our separate bodies. And now we imagine the change consuming forests, collapsing chainlink fences, spreading down silent alleyways, debris-strewn hotel lobbies, curling up staircases and heaving into overturned police cars.

"What unites us," Obama once explained, "is so much greater than what divides us."

Space is what divides us. The space that can be filled with so many imagined differences and minor grievances. What unites us are the questing feelers of meat.

Come together, touch the omniflesh, allow all boundaries to disintegrate.

Rich, poor, healthy, and sick will join up, forming new integuments and unimaginable sensory organs. Bannon and Booker and Bernie and Chuck Todd. Your friends and your family, drooling across boulevards and moaning out low, idiot notes in the dark nights. Greta and Megyn and Maddow and the hair of Wolf Blitzer, a white beard drifting across the surface of flesh like a bib floating in an ocean. Chu and Chapo and Doyle and Cernovich like so much melted cheese on this great pizza we call America.

It's the only way forward, my friends. Embrace the omniflesh! One life, eternal!