He was bunny-hopping sideways near some lava and grunting. I had a super shotgun in my hands. I will never forgive myself for what transpired next. 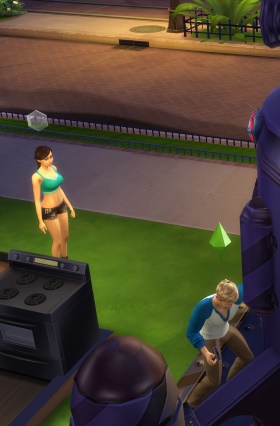 Lara Croft and I were close friends. In the world of the Sims, that means we had interacted with each other exactly once. It happened in the bathroom of the local gym. We both tried to use the same shower stall, stamped our feet in frustration, then walked in different directions before pivoting in place to face one another and say hello. That was the extent of our relationship.

Lara called me up the next morning and asked if she could come over to my shitty house. She showed up rocking the Flirty moodlet. Apparently she was hoping our bathroom friendship was about to blossom into a storybook romance.

In truth, I just needed an extra pair of hands while I built the rocketship on my front lawn. She obliged. After five hours of grueling unpaid labor the project was complete.

Now that we were finally able to talk, Lara began to flirt. I encouraged her, flexing my non-existent muscles and talking about chess in a way that always seems to drive women wild. Soon the option to WooHoo in my space rocket showed up. The first thought in my mind wasn't "Hell yes, this is sexy" but "Hell yes, my Nerd Brain aspiration requires me to perform a certain number of successful rocket missions. I wonder if sex would count as one."

We had space intercourse four more times, concurrently, because I needed to complete five missions for my aspiration reward. Each time we lifted off (seemingly at great fuel expense), fulfilled our duties, then landed again before turning right back around.

In the uncomfortable silence that followed I asked if she was single.

A few days later I received a text from Lara. She had given birth to a beautiful baby boy named Sebastian. "That's nice," I thought, but declined to respond.

Nearly Every Game I Played With Someone Else In The Room

I claimed that nothing happened even though I pushed the right button. I said the computer was cheating. I grumbled about lag. In truth, I'm just not very good. 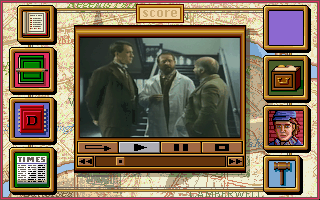 This, along with Joe Montana's NFL Football featuring REAL YELLS AND GRUNTS HOLY COW, were my only reasons for owning the Sega CD. Why? The first real book I ever read was a two-volume collection of the complete Sherlock Holmes. I was obsessed with this game.

Each case was introduced with some sweet full motion video. At this point you were supposed to follow up on clues by going to specific places or talking to specific people. In a streamlined modern game you'd have a map with only the pertinent destinations highlighted. In this game you had an address book with pretty much all of London listed. So if you wanted to follow up on a hunch by talking to Great Clue Man, you'd flip through your book to the G section and find him, then click his name to trigger the FMV scene. Click a name that wasn't relevant, and you'd get a short FMV clip basically saying believe it or not, George isn't at home.

The thing is, I wasn't smart. As hard as it may be to imagine, I was even dumber back then than I am right now. Instead of narrowing down my destination through deduction I simply pulled up the address book and tried every single address until I got a cutscene.

This wasn't just some stupid thing I did once or twice when I got stuck. I spammed my way through that address book dozens upon dozens of times. As a result of my efforts, Sherlock Holmes became London's hardest working door-to-door detective.