I WANNA ROCK! I WANT I-RAQ! 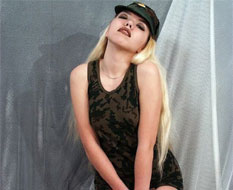 Oh yeah? You like that don't you.The good old US of A is gearing up for another round of "bomb another country silly" and things seem to have gained an unavoidable momentum at this point. Fresh-faced troops are already in the region surrounding Iraq dressed up in their finest kill-suits, while carrier fleets and impressive armadas of aircraft move into position. The pageantry is very breathtaking and I really can't get nearly enough video footage of C-130 Specters refueling in Qatar. These warm-up clips are like the blowjob to get us ready for sex. They're making us all hot and bothered for orgasmic scenes of military carnage exploding across the screen in the taboo and sassy white-on-black embrace of forward-looking infrared sights. My pants are off and my cockring is in position just waiting for the first titillating grainy footage of tracers zipping skyward, searching fruitlessly for the G-spot of an F-15 dropping satellite-guided ordinance through the cloud cover.

War is something much more gripping than what is presented in these tiny poorly-framed windows of porno-quality digital video coming to us over CNN. There's a lot more to be seen, and if the government just realized it, a lot of money to be made.

Think about this. The movie Pearl Harbor cost something like 5 trillion dollars to make, much of that money going to make it seem like a real war was happening and the Japanese were ruthlessly attacking the shit out of us. 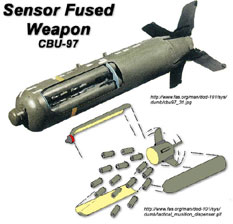 Yes, you have been a bad girl and I think you need a spanking.They spent all this money making fake bombs blow up fake people and fake boats, but the government is spending nearly as much money right now to go blow up real people with real bombs. The government would have a serious cash cow if they just invested in some high-end film equipment, the proper lighting and sound equipment, and maybe that guy who does the voiceover work that always starts out "In a world gone wrong." They could plan operations around staging the most spectacular attacks imaginable and then sell them to Hollywood. Hell, why even bother with the middleman, they could just hire a few actors to ham it up before an attack and then have the CIA equivalent of Industrial Light and Magic digitally insert Bruce Willis's face over whichever Army Ranger kicked the most ass.

Get a jingoistic shit-heel like Jerry Bruckheimer to spin everything all pro-America to give the populace the glorious propaganda they want so badly AND make back all the money spent on Tomahawks and Fuel Air Bombs at the same time. Ladies and gentlemen, I think I just solved all the budget problems of the Defense Department for the foreseeable future.

Since no pragmatic Joint Chief had the creativity to think of this himself I have a feeling they might need a little help in planning their future operations. With that as my goal I have put together a sample operation for the upcoming war against evil that could easily be turned into a replacement for a big-budget movie. I gave it a really cool name too because military operations and action movies both have to be given the coolest possible names. 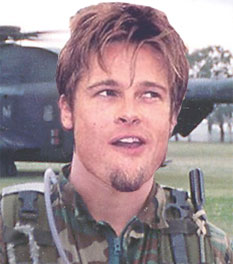 Go give 'em hell Brad!Mission: To destroy Iraq's ability to attack Coalition aircraft and tell a really cool story about a rookie Navy SEAL who is avenging his father's death (he was stabbed to death by Saddam during the Vietnam War).

Operational Plan: Phase one of Operation Cobras and Skulls will begin with "Tango Squad" under the command of veteran Navy SEAL Benjamin Strike tasked with destroying a series of SAM emplacements near Baghdad. There will be a confrontation in the planning room when a hotshot pilot argues that he and his wingman can blow up the SAM sites with missiles but some officer will overrule them and say really dramatically to Major Strike "can your boys do it?" and Major Strike will think for a minute and say "Yes, sir". Before the Tango Squad inserts into Iraq, Corporal Thompson will talk to Lieutenant Cummingly on the deck of the carrier or whatever and make all sorts of sexy faces and give her a picture of himself and tell her to keep it after he dies and she'll say something like "I'll give it to you when you come back".

From there it will be a HALO insertion over the LZ South East of Baghdad. Once Mr. Pitt, Lt. Commander Murray and two squad members have exited the plane a SAM missile will hit it and kill the rest of the squad. We'll have a chase plane nearby to capture the whole thing and station a SAM site on the ground if Iraqi SAM fire proves inadequate. Corporal Thompson (Pitt) will yell an exaggerated "no" and then throw a grenade down at the SAM site. All of this aerial work should be second unit stuff, we'll have the director (Bruckheimer has expressed interest) down on the ground filming the Iraqi SAM crew. Even though it was a SAM that shot the plane down when we cut to the ground it will be an AA gun because those are much more dramatic.

Then we'll show an F-15 piloted by the guy from the beginning and we realize he's coming to save the day. We see him arm a bomb and then it cuts to the Iraqi gun emplacement.

Bruckheimer: Okay, when the bomb hits I want you two to fly directly towards the camera and I want that guy over there to run around for a few seconds on fire.

Bruckheimer: Chop-chop people, this film is not cheap and neither are those bombs. Now get back to your anti-aircraft gun. Colonel Muhammad, could you come over here a second.

Bruckheimer: For this scene your motivation is that you hate the Americans, they've bombed your people, starved your civilians, and they treat you like sub-humans. When the bomb hits I'm going to have Lance switch out to high-speed film. I want you to look around in frustration and then grab the controls for the gun and start shooting. Yell something in Arabic like "For Allah" or "For My People". Okay?

Bruckheimer: Good. Okay, places people, we've got about two minutes ETA on that F-15. Craft services, can I get a bagel or something in here? I mean Jesus Christ come on, we haven't been bombed into the Stone Age yet!

As the remaining Iraqi AA gunner fires up, Corporal Thompson will parachute directly on top of him kicking him in the face in the process.

Phase three of the mission will be a montage of the surviving squad members blowing up various SAM and AA emplacements. We can have additional film crews just film other units performing this task, only have them dress in the cool black SEAL jump uniforms. Phase four will be where Corporal Thompson and Major Strike (the only remaining survivors) will argue. Their orders are to proceed to the extraction point but Thompson wants to infiltrated Baghdad and kill Saddam to avenge his father. During an impassioned speech Thompson will attempt to convince Strike, Strike will refuse and tell Thompson he can go but he'll tell them back at base that he was killed. Thompson will then start to walk away for a minute or two and then Strike will jog up beside him having changed his mind. 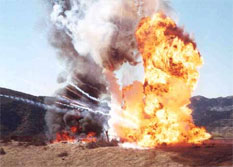 Oh god yes! Yes!For the big finale we'll either have to wait to shoot until Saddam has been located or we can use a look-alike prisoner and then CGI as necessary to make him look like Saddam. Strike and Thompson will sneak into the Presidential Palace, knifing a few guards in the process (although if Lt. Commander Murray can do that cool neck-snap thing we could have him kill a couple of them that way). Finally they will burst in on Saddam and he will throw up his hands as a coward. Thompson will start to explain how he is going to give him a fighting chance but halfway through his speech Saddam will pull out a pistol concealed in his desk and shoot. Strike will throw himself in front of the bullet and save Thompson's life, but sacrifice his own. Saddam will start laughing and Thompson will jump at him flinging the gun out the window nearby. A knife fight will ensue during which Saddam will stab Thompson in the shoulder but Thompson will ultimately prove stronger and force the knife back into Saddam's head or chest.

We can fade out and then send another team in to extract Brad Pitt or mop up depending on the situation.

I think with some good editing, a few good directors, and a daring cast willing to go the whole way in the name of democracy we can churn out six or seven blockbusters from this war in time for summer. Let's get the ball rolling Mister President, don't be a tease. You've got me all hard and if I sit here much longer with this painful war-erection and my pants off I'm eventually going to realize how sick it all is and get as limp as if I just noticed my cat staring at me.

Howdy, Livestock here. First off, I must inform you that there is no new Phriday this week due to me being a drunkard or something. Phriday will return next week filled to the brim with new images and comedy! But don't worry, because your need for entertainment has been satisfied tenfold this week. It is with much delight and some minor jock itch that I announce to you the newest game featured here on Something Awful. That game's name is River City Hacky Sack, or RCHS as the kids call it. It was created by TylerK, a forum goon and good friend of mine. He's an extremely talented Flash wizard and also damn hilarious, and this game easily reflects that better than a mirror from Krypton. The busy bee worked for over six months programming and reprogramming this, creating hundreds of frames of animation, and some truly awe-inspiring features. And let me tell you, there are enough features and secrets in this game to fill the biggest bucket you can muster!

Those of you familiar with Flash games are undoubtedly aware that the average inspired Flash game either has you dropping water balloons or "fucking" Osama bin Laden by shooting him in the head or blowing him up. In other words, Flash games tend to stink like a skunk trapped in the ass of a rotting shut-in trapped in the carcass of a rotting whale buried under a pile of diapers previously worn by people who died of Ebola. This game, however, excels in absolutely amazing ways. It captures the fun, action, and excitement of classic console games of the 8-bit and 16-bit Nintendo era, particularly those from Technos like River City Ransom and Super DodgeBall. 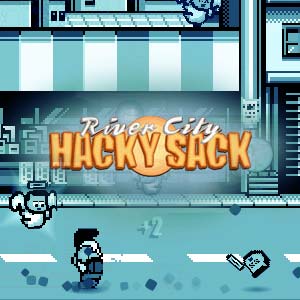