My Only Friend, THE END

You only have a few hours left to enter the exciting contest! We will stop accepting submissions at midnight Pacific time tonight, so put some hustle in that game and get it across the finish line. We will be announcing the winners and reviewing some of the more interesting entries on Monday. Given the wide variety of horrible and great submissions I think it will be quite entertaining for you. 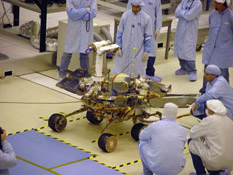 Go on boy, find the water. Go on! Good boy!For decades water has been man's best friend and man's worst enemy. If it goes down one tube in our neck thing it will provide us with sweet and delicious nutrition, if it goes down the other neck tube it will kill us instantly. This is why pirates used to refer to water as a "harsh mistress" and why vampires stubbornly refuse to cross over water, although I think they might take boats and airplanes. Plants need water to build leaves and even the lowly frog would dry up and turn to stone if it weren't for the helpful assistance of water. But even in nature water is winsome and wild, falling from the sky like meteors and crashing down, forming huge molten pools of water called "floods". Millions die every year because of water and millions live every year because of water.

Imagine my immense surprise when NASA scientists announced yet again that they had discovered evidence of water on Mars. This fascinating revelation created more questions than it answered. Would water on Mars look like water on earth? Would it speak our earth language or would it have a totally different language? Would Martian water possess advanced technological wonders?

Luckily, the whiskey finally gave up its hold on my brain and I realized that water isn't actually alive. Then I wondered why the fuck NASA keeps making a big deal out of all of this water bullshit. I mean they've found water on Mars like five or six times now. A bunch of nerdy people wearing "I Want to Believe" t-shirts and sporting holier-than-thou attitudes quickly pointed out that standing water means a better chance of fossilized life on Mars. After I finished dismembering their corpses and flushing them down the toilet I realized that this is really getting irritating. NASA's annual budget is over 15 billion dollars and the recent water-finding mission cost over 800 million dollars. They spent almost a billion dollars sending a couple of remote-controlled car to Mars to find something they already knew was there. 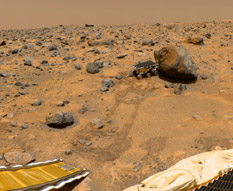 Warmer...warmer...ICE COLD!I was cool with the Mars rover mission when I thought it cost six or seven hundred dollars. When I realized it cost more like a billion I blew my fucking top. That means I personally paid like three dollars to see a press conference where scientists were shooting loads over rock formations. Medicare, Social Security, the military - hell, even the war in Iraq - are all better expenditures of my money than this nonsense. They launched their fucking billion dollar space cars to find something they already knew was there! That was the goal!

Then, to make matters worse, the president comes out surfing high on the wave of excitement over the space water telling me he's going to send astronauts to Mars? What, do they need to take a fucking bath? I've got a tub in my apartment and I will fill that shit up for twenty bucks. They can come in and stomp around in their space suits for a couple hours and then the president can stand in front of a banner that says "mission accomplished!" while giant mechanical eagles fly overhead in formation. Then maybe the next equally retarded president will stomp out and declare that we will launch a mission to the beach to find fucking sand. Whoah, science guys, you're blowing my mind here!

Overstated hostility aside, I'm still pretty pissed off. Don't get me wrong, I'm no anti-space astro-hater. I think the idea of blasting men into space is pretty near the top of the list of cool things to do with an afternoon. My problem isn't even the ridiculous cost of all of these space adventures; it's the idea that so much money is being spent on so little. I can forgive the moon landing, that was early in our space career and we still had a lot to prove to those filthy commies. Now we don't need to overcompensate for our national penis, and the only time we should be dropping a billion dollars on space projects is when they have a damn good goal. They don't have to succeed, I understand not every project will pay off, but "find water on this planet" is setting the bar way too low. 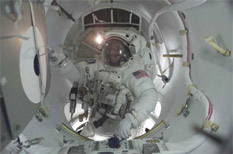 When NASA invents a rocket that will blast on a glorious column of fire through the stratosphere and dramatically lower the cost of gasoline I will be all for it.

From the Wide World of Sports

Howdy, Livestock here with a quick and painless introduction to this week's Photoshop Phriday, which features the SA Forum Goons sharing their favorite and wierdest moments in professional sports. Think of it as a Marv Albert blooper reel gone criminally insane. Or just imagine a naked Marv Albert biting a prositute's back in a cheap motel. You get the idea. Here is a preview: I just totally pranked you guys because that image was from last week's Page of Shame. Just go read this new feature and see for yourself. I promise that image won't appear anywhere in it.