That's right, ladies and gentlemen, it's time once again for another patent-pending World Famous Something Awful Contest, the legendary tests of will and skill that rewards entrants with valuable prizes and significantly more valuable cash bonuses! I'm sure everybody out there remembers the winner of the last SA contest, Darren Accardo, who submitted this first-place entry for the "Get a SA Tattoo Somewhere On Your Body and Take a Picture of It By Having a Hidden Camera Film You While You Commit a Major Felony" contest: 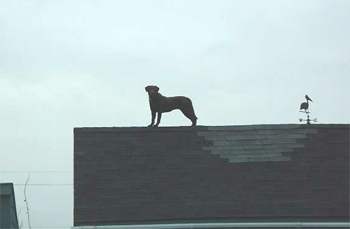 As you can tell, this was obviously not the winning entry for the contest. This is in fact a photo of a dog standing on a roof. However, since neither the previous contest or anybody named "Darren Accardo" exists (to the best of my knowledge), I don't feel guilty lying to you. I mean, for God's sake, it's a DOG ON A ROOF. I don't think I need to apologize for that.

Regardless, it's time to introduce a new contest to the bowels of Something Awful history and fame. As you are probably aware of, many "entertainment" sites out there feature multiple pictures of real life fake Internet girls. Some of them set up webcam portals, an area of the site where these girls have their picture refreshed every 30 nanoseconds in exchange for a link to their horrendous e/n site. I would have my own female cam portal except I don't want to run the risk of exposing you readers to the daily drudge they constantly spew out like an oil well gushing with medical waste.

This is where the current SA contest comes in. We're looking for the hottest and most sexiest female SA readers out there to fill our required "Internet Girl" quota. We figure that if other websites can do this kind of crap, we should as well. I mean, we're just as heterosexual as the next site. And just because I download Japanese penis girl porn doesn't mean I'm gay because, hey, they're women. They just have penises, that's all. Now I realize that there may not be that many attractive women visiting this site. Last time I took a poll, the readership of this site consisted of the following:

Then you have to assume that 50% of people who claim they're female are simply males who want more attention. 50% of the remaining figure are men who honestly think they're women, and 50% of that total are men who don't know how to properly fill out surveys. So the true number of women who read this page is, uh, I don't know, really low I guess.

Luckily for us, we don't give a shit! That's correct, we don't really care if you're really a male or a female! All you males out there are free to enter this contest, send in a photo, and claim to be somebody else. As long as your email is written convincingly (ie, don't repeatedly refer to yourself as "mister") and contains an attractive female, you'll be a valid entry! Now for the contest rules and regulations:

5) On second thought, maybe that's a picture of a dragon.
6) Regardless, it doesn't warrant me making an extra rule just to point that out.