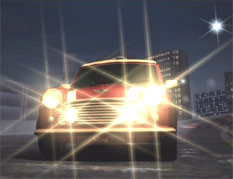 Each car in GT3 comes equipped with more lens flares than a clan web site.When I finally got around to buying "Gran Turismo 2" for my Play Station, I already knew I was in love. It was like looking at those catalogs of the Russian women that they send to my apartment and finding the perfect mail order sweetheart who I wanted to spend the rest of my days with. I had played it at a friend's house and knew that it would have dinner ready for me when I got home from work, it would cut the fingernails on my right hand, and it would indulge my secret fantasy to have oral sex performed on me in a haunted amusement park. In short, we were a perfect match. I thought our love affair would never end.

Then I heard about "Gran Turismo 3", "Gran Turismo 2"'s younger sister. I followed her development from afar, downloading video clips of her and paging through pictures, reading every bit of information I could get my hands on. Sometimes, late at night when "Gran Turismo 2" was asleep, I would even sneak onto the computer and touch myself in an inappropriate way while I watched clips from the E3 build of Gran Turismo 3. It was a sick and secret love affair.

That is, until that fateful day when I got my hands on my very own copy of "Gran Turismo 3". I immediately kicked poor old GT 2 to the curb. She wasn't aging particularly well, so I put her out to pasture, tucked away in a flip case next to "Parasite Eve" and "Warhawk". Those two had been nothing but flings, one night stands best forgotten.

Let me dispense with the lame metaphor. "Gran Turismo 3" is the best game released to date for the Playstation 2 game console. Whatever your opinion of the platform - and unless you are one of those crazy nutballs that absolutely loathes car games - this is an incredible game. It pains me to say it because it's much more difficult to be funny when writing about a game if you like it.

The graphics in GT3 are fantastic. No, string ten adjectives together and then you might approach the grandeur of the glittering skyscrapers on the Tokyo Highway level. Make that twenty and you'll approach the splendor of hard-turning on wet asphalt, a fine mist of water rising up behind you, your car and the streetlights reflecting in the shimmering pavement. It's beautiful, it's detailed, it's got a great draw range, it has a great frame rate. Fuck me hard, I can't say anything bad about it.

Like a case of full blown AIDS, "Gran Turismo 3" will destroy your life. You will fixate on fine tuning your car until you can win one more race and then buy a better car to fine tune and use to win more difficult races. It's a cycle that I have not completed. Where's the rubber hose, I need to tie off!

Now as much as I absolutely adore this game I must admit that I find it lacking in certain respects. When compared to Activision's seminal murderous racing game "Deathtrack", GT3 has a serious deficit of ultra-destructive weapons. In fact none of the games in the Gran Turismo series had a single weapon upgrade for your car. This is absolutely preposterous in a cutting edge game, especially when Deathtrack (which was released in 1990) had like a hundred guns in it. I think a comparison is in order here. 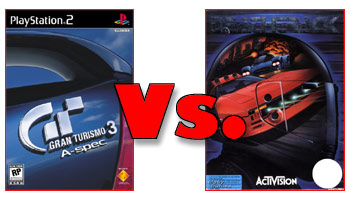 Winner: GT3. The number seven is greater than the number three, and since I'm sure GT3 has more than seven cars, it must be better in this department than Deathtrack.

Gran Turismo 3: Line of sight in most cases, very slight pop up.

Deathtrack: Buildings and terrain emerge from the side of the road like constant salvos of missiles from hidden silos.

Winner: GT3, by a nose. Gran Turismo is far more realistic than Deathtrack but there was something blazingly exciting about the way a dangerous curve and an overpass would appear 50 feet in front of your car in Deathtrack.

Gran Turismo 3: Each car consists of significantly more than 1,000 polygons.

Deathtrack: Each car consists of significantly more than 10 polygons.

Winner: Deathtrack. Pike's Peak Escudo sounds like a car that would have an air-brushed painting of Jesus on the hood. The Hellcat, on the other hand, sounds like it knows how to get things done.

Gran Turismo 3: I didn't see any Honda CRXs in the game, so I don't think GT3 is going to win.

Deathtrack: I would guess the Pitbull plays the game's midi-music pretty loud.

Winner: Tie. The low quality of the midi music in Deathtrack makes the arcade theme from "Spy Hunter" sound like a live performance of Phillip Glass' "Akhnaten" and negates the fact that a car in the game has a sound system. 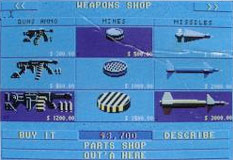 This ain't your daddy's wheel shop!

Gran Turismo 3: I was going to give GT3 a lot of credit until I realized the various custom rims you can fit to your wheels are not actually whirring death saws.

Deathtrack: The game is literally overflowing with weapon modifications for your vehicle.

Winner: Deathtrack. With a weapon like "The Terminator" how can this not go to Deahtrack? To quote the game's manual: "Picture a high-explosive warhead strapped to a skateboard. Nowslap on a rocket pack and launch it from your machine, and you have aTerminator."

After tallying up the score from this informal comparison study, I think it is pretty obvious that Deathtrack is overall a superior game to Gran Turismo 3. Despite my initital fanboy ravings about the game, I must now retract what I said and suggest you purchase Activision's Deathtrack. It is available on 51/4 floppy disks at the creepy unlit section of a computer show near you!