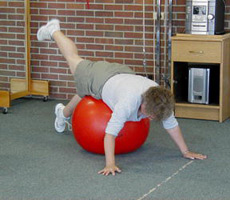 Strange injuries such as "Sudden Testicle Elephantitis" are unpredictable, and could abruptly end an athlete's career. Pictured above is Michael Jordan.As some of you may know, professional baseball player Sammy Sosa recently injured his back while sneezing. Yes, sneezing. The thing that babies and old people manage to do on a daily basis without inflicting fatal wounds upon themselves. The injuries Sosa sustained were so serious that he actually had to miss several games, which stunned the world and spurred hundreds of sports writers to race to their keyboards in an effort to be the first genius to use "SOSA INJURY NOTHING TO SNEEZE AT" as a headline. Sosa's worst fears were allayed when he learned that he would indeed walk again, and that with intense therapy he would eventually be able to stick those little candy corns that you get for Halloween up his nose once more. Sosa's injury was peculiar, but after a bit of investigation I've come to find that uncommon injuries in sports are more common than one would think. Which means they aren't uncommon after all, I guess. I don't know. What I do know is that some of the injuries I researched are so bizarre that they put the sneeze incident to shame.

Take, for example, Ooter Oslo. One of the top skydivers in the world, Ooter set out to break a record in 1989 by diving from an unheard-of altitude of 45,000 feet. Many said he was insane to attempt such a feat, but unfortunately for him he was too proud of a man to back down. On that fateful morning, Ooter suited up and proceeded with the jump, relying on an oxygen tank to help him survive the first portion of the death defying freefall. After a seemingly endless jump, Ooter finally touched down safely in the predetermined landing zone without a single problem. There he was met with cheers from a crowd of friends and colleagues who attempted to lift him onto their shoulders in celebration, but accidentally dropped him. He was unable to pull his backup chute in time, and fell four feet to his death.

In baseball, it's not uncommon to see a pitcher hit a batter with a wild pitch. In 1997, however, Jeff Conine threw a pitch that was so wild it actually struck his own outfielder (who was some 150 feet directly behind Conine) square in the face. The incident was so bizarre that it would probably be discussed around water coolers to this very day if baseball weren't such a fucking boring sport that no one wants to watch.

Professional wrestler Macho Man Randy Savage was accidentally punched in the stomach during a match, and was immediately rushed to the hospital. Amazingly, Macho Man survived, but the incident haunted him for years. He refused to enter the ring without wearing his "stomach cup", which was simply a protective cup for the groin that he duct taped to his midsection. 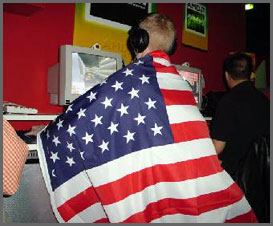 Some people might not consider playing video games a sport, but there are several active leagues with dominant players and big name sponsors. One of the most prominent gamers today is "Fatal1ty", who happened to suffer the strangest injury I've come across in my research. During an Unreal Tournament match Fatal1ty actually donned an American flag to illustrate that he was a glorious adonis-like hero which humanity should worship, and at this exact moment he transformed into an ass. Hard to believe, right? But it gets stranger. According to an anonymous source within Fatal1ty's "krew", this is a recurring injury. "When he's asleep he's not really much of an ass," says the source. "But when Fatal1ty beats an opponent or opens his mouth.... boom! He's the biggest ass you'll ever see." As of this time, there is no known cure or treatment for Fatal1ty's condition.

In the third period of a home game against the New Jersey Devils, the Pittsburgh Penguins' goalie was shot and killed in a tragic hunting accident. Investigators can't agree how the bullet managed to enter the stadium, but they can agree that The Monkees were a superior band when compared to the Beatles.

During the World's Strongest Man championship, Swedish competitor Jarno Hams pulled both of his arms out of their sockets while attempting to throw a train over a 15 foot wall. As he screamed in agony and stumbled in a random direction, his shoelace came undone and he tripped, breaking his jaw on an anvil that was left over from the "Pinky Toe Strength" challenge. The crowd watched in silenced horror as Hams somehow righted himself, then made his way to his car in a poorly planned attempt to drive himself to a hospital. At this point he realized that he had locked his keys inside the vehicle. With no other options available, Hams had no choice but to press his torso against the car and push it thirty miles to the nearest emergency room. Also, when he eventually got home he found out that his parakeet died and Mystery Science Theater 3000 was cancelled.

These injuries might sound frightening when compiled into a single article, but there's really nothing to worry about as long as you don't ever leave your house. Additionally, the fine people at our favorite conglomerate State Og are hard at work on improving safety in all sports. I'll leave you with a reassuring quote from Andre Person, the head of State Og's Sports Safety and Inedible Plants division.

"We're currently developing new technologies to prevent sports-related injuries", Person explains. "We considered developing old technologies, but that required travelling to the past and we don't have a time machine. To be honest, we're sort of doing things half-assedly since we're hoping to get that time machine at some point. So far we've only got a football helmet made out of packing peanuts, and a Nascar engine that can't start. Our thinking on that one is that we could reduce crashes in Nascar races by up to 40% if we could simply get all those cars to stay in one damn spot."

Whether you're a raging alcoholic or a drunk rageaholic, State Og has a product or service for you! Take this for example:

Wacky Pennies are made of a delicious South American imitation chocolate with a fine brownish sugar glaze. These candy-like treasures are cast in a mold made from an ACTUAL REAL LIVE U.S. PENNY! That means Wacky Pennies are virtually INDESTINGUISHABLE from REAL pennies. These Wacky Pennies are so fun, they should be ILLEGAL! (Wacky Pennies are ILLEGAL in Alaska, Hawaii, Oregon, Washington, and California)

If you can sit still without headbutting the monitor and your vision isn't completely blurred, check out this week's update!