This New Slave Is the Worst 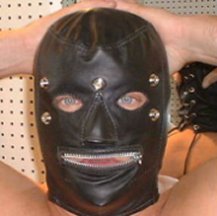 I've just acquired a slave to help me out around the house. Like most people, I thought that slavery is outlawed, but apparently you can legally solicit slaves through Craigslist. My slave's name is Edgar. His ad says he's "submissive," which is good because I need someone who's willing to follow orders and help me get my housework done ASAP. He also supposedly is into leather, which I hope means he can reupholster my sofa.

It turns out that Edgar is Mexican. You wouldn't think it from his pale complexion, but he's got a leather luchador mask that only Mexican wrestling fans wear. I just hope he's as passionate about hard work as he is about wrestling.

I showed Edgar my furnished basement, where he'll be staying. He calls it a "dungeon" for some reason. Granted, it's not the best basement, but at least it's dry. I set up a sofa for Edgar to sleep on, but he prefers the floor. Not sure what the issue with the sofa is, but it's just as well since he likes sleeping in the buff anyway.

This morning, out of nowhere, Edgar asked me to give him an enema. I told him I'd call a doctor later if there was something wrong with his colon, but right now he had work to do. I sent him to mow my lawn, since it looked like he could use some sunlight. Two hours later I checked back on him and saw he was mowing naked! My neighbors were holding their son's birthday party in their backyard, and were pretty freaked. In exchange for not calling the police, I gave them all my patio furniture. Now I'm out an entire set of patio furniture and my lawn still isn't mowed. What have I gotten myself into?

Today Edgar asked me again to chain him to a pole in the dungeon (I call it that now just to make him more comfortable). I told him I've got no time for childish cowboys-and-Indians games when the roof needs shingling. He looked pretty disappointed and for a moment I felt bad for the guy ... until I caught him nailing his testicles to the roof with the nailgun! He must seriously hate working if he's willing to stage such an elaborate injury just to avoid laying some shingles. When I scolded him on his slacking he got down on his knees and asked if I was going to whip him. I told him yes, I was definitely going to crack the whip, so to speak, by giving him more chores. Since he was so adverse to roofing, I put that project on hold and told him to clean my shoe collection. He got really excited, so I thought maybe, just maybe, I'd get some honest work from him. Wrong! When I inspected my shoes they were covered with saliva. He'd apparently cleaned them with his tongue. 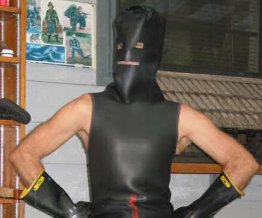 Edgar was three hours late for breakfast, so I went looking for him and found he'd locked himself in the dog cage in the shed. I wish I could believe it was an accident, but this is the fourth time this has happened. To stop this trend, I prepared a PowerPoint on the inverse ratio of work accomplished to time spent in the dog cage. Midway through showing it to him I had to go the bathroom. When I returned he'd logged onto the internet and was looking at some really disgusting pictures! Needless to say, he's banned from the computer room now. As further punishment I told him to go unclog my toilet. Minutes later I heard a horrible gurgling sound and found him trying to remove the clog with his face! Seriously? How inefficient can you get! For all the time he'd wasted today, I said I wasn't making him any dinner, which he said was fine since he'd already eaten anyway.

Edgar disappeared today. Can't say I'm surprised since he's clearly a lousy worker with no sense of pride or commitment. No point in sending out a search party since he's probably halfway to the Mexico by now. To make things worse, he also took my nailgun, and some nails from the neighbors' shed. The neighbors are pretty upset about this whole thing, so to smooth things over I said they can borrow my new slave when he arrives. His name is bronydude223 and he should be a huge asset despite his struggles with incontinence (his profile contains several references to diapers).