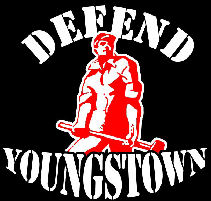 Get your very own symbol of the white man's burden on a t-shirt for just 20 dollars!After having read about what a relentless shitdumpster Youngstown is, you may be wondering about the mental capacity of those who stay in the city without being forced to by a court order. Some are trapped by poverty; others, like me, stuck around for a quarter of a century due to the pity-based exchange system known as "sponging off my parents." But there's a certain group of wide-eyed Pollyannas in Youngstown who willfully and joyfully bask in the white-person novelty of urban decay, if only to give dead-eyed suburbanites something to do in the city aside from fleeing in terror.

Employing an army of t-shirts, blogs, and book clubs, the Youngstown self-defense army will never rest until complete gentrification takes over and white 20-somethings always have a place to buy martinis and knick-knacks on a Saturday night. Ignoring all of the relevant social problems that, if fixed, could actually make Youngstown a better place for everyone, these intolerable clods (I went there) use the respectable platform of saving a city to further their own popularity and agendas, and to fuck anyone who hasn't yet come down with what we like to call "The Youngstown Trio:" hepatitis, herpes, and being ugly. 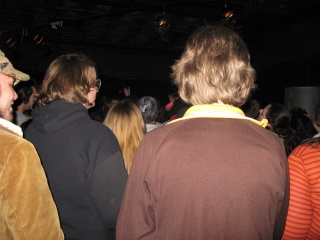 Such ownage... Impossible...The best part about baby's first step into fascism is that the Defend Youngstown crew views all negativity in only light side/dark side Star Wars analogies, and will permit no counter-arguments, even if they're not nearly as hateful and unproductive as the ones I'm making now. Just a year ago, I experienced some of their general fuckheadedness via some shitty website I used to blog for; you see, once I thought it would be okay to make fun of an Internet radio station run by special needs musicians who never realized that Internet radio peaked at the beginning of this decade, and was less profitable than those banner ads featuring fat women dancing to show you how low mortgage rates have sunk. I was only wrong about the first thing. What followed was a Robitussin-fueled four-month meltdown by a group of people who weren't even competing in the same field or reading level as me; this debacle culminated with someone snapping a picture of my back at a concert and claiming complete and total victory. I guess there was a scavenger hunt that day at the methadone clinic.

Right about now, as I reach word 10,000 of this article, I feel that maybe I've been a little too negative about this whole "world's most unlivable fart cloud of a town" business. Which is why I have decided to end the piece by talking about the best thing to ever come out of Youngstown. And I am putting it on the next page in a technique I learned from the master of suspense, R.L. Stine!