The Street Weasels hit the scene

Gang Up With Something Awful! 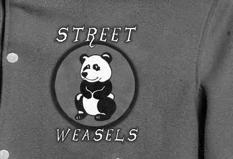 We're The Street Weasels (ignore the panda bear) and we're taking the country by storm!

Since we're getting precariously close to the Halloween season, I had originally planned to write yet another fiendish article about spooks, specters, ghouls, and Internet advertising networks. However, as a wise man once said, "times change." He said that because times indeed do change and people don't refer to this person as "wise" for nothing, despite the fact that nobody knows who originally said this phrase. I'm guessing it was probably one of those Greek philosophers, like that guy who invented the triangle, the right angle, and the solar system. Dana Plato or whatever.

Anyway, I'd like to take this opportunity to introduce the newest member to the Something Awful family of consumer products and services, joining the critically-acclaimed "Spunky Suzy" doll (now with it's own spunk included!) and "The Riding Lawnmowers For Homeless Veterans" social program. We are proud to announce that Something Awful has created our own street gang, a rough-and-tumble collection of surly youths named "The Street Weasels." Our collection of irritable juvenile delinquents are just waiting to make the streets of your city a much better place, assuming your streets are currently a bunch of tall, deadly spikes that can only be walked on when enough street gang member corpses have been piled up on top of them.

In this scary and uncertain age of terrorism, many people have been expressing the desire to go back to "better times" when America didn't worry about the Taliban, hijacked airplanes, Anthrax, or Michael Jackson. A large number of people hail the mid 1950's as the "glory days" of the United States, a time when the populace was only concerned with trivial things such as what flavor ice cream to choose at the local malt shop, who to ask to the highschool prom, how to repress those bothersome negroes, and ways to shield your eyes when an atom bomb fell on your head. Since we're really terrible at the skill of slavery and we lack the finesse to dodge explosives, we decided to reproduce the next best thing from those times: the juvenile delinquent street gang. Our juvenile delinquents range from age 15 to 48, the acceptable range that was considered "teenage" back in the 50's. 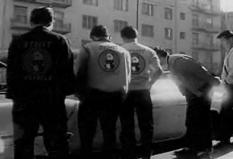 Members of The Street Weasels take a break from leaning and instead look inside a parked car. We're flexible like that.

The Street Weasels are a gang of disenfranchised suburban white teenagers who have "had it" with "unhip" attitudes from their parents, teachers, and local news reporters. Our solution to all these problems involves us standing around various street corners while smoking cigarettes and leaning on walls. If there are no available walls nearby, a member of The Street Weasels will provide our own temporary wall to lean on. Like all "cool" jacket gangs, we have our own patch that makes our outfits distinctive and lets the entire world know that we are wearing a patch that makes our outfits distinctive. This patch has the words "STREET WEASELS" embroidered in a very scary font with a picture of a panda bear in the center. We had originally planned on putting a weasel there but we couldn't find a picture before the deadline to get the art to the printing place. We even used the Internet and everything, but we didn't use a search engine because search engines are for wimps and nerds. Cool people like us find what we're looking for by punching random words in the URL bar, and there were definitely no weasel pictures located at "www.smorgula.com." This patch might also work out if we decide to change our name to "The Chubby Homosexual Pandas" because then all we'll have to do is cross out the words next to the picture. If any rival gangs or city folk ask us why we're named "The Street Weasels" but have a picture of a panda on our jackets, we respond by saying, "what's it to you?" or "so's your old man!" We say "so's your old man!" in response to almost every question. Then we tilt our head back and look really smug. This is the way of the street gang, and I don't expect you to understand it, you square.

As one of the premier 1950's street gangs of the 2000's, The Street Weasels will provide all the top-notch quality you have grown to expect from 1950's juvenile delinquents. This includes, but is not limited to, the following exciting activities:

Punching one another and then laughing

Suddenly running from one location to another, as if to suggest we just committed a crime and had to flee the scene

Looking at women who pass by for some reason

Crossing our arms and squinting

Not doing math or calculating interests rates or sales tax 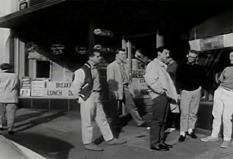 If you have rival gangs that are infesting your neighborhood, lowering the property value of your home by selling crack and worshipping Satan, The Street Weasels would love to help. Simply hire us for a weekend and we'll be happy to stand around outside your home, crossing our arms and looking tough while absorbing the first volley of gunfire directed at your home. We also do kids parties and bar mitzvahs. But don't take my word for it! Allow me to introduce a couple members of The Street Weasels and you will soon realize that we are in fact the best and most economical choice for your gang activity!

NAME: Joey "Double Dip" Malloy
AGE: 45
TURN ONS: Denim, changing spare tires, rotating the AM radio knob
TURN OFFS: The prom queen, cars that don't have flames painted on them, Mexicans
DESCRIPTION: Joey is one of the most dedicated Street Weasels gang members, having logged over 580 hours leaning up against a barber shop pole on 54th Street. He is experienced in talking while his body is slanted at a 70-degree angle, in addition to lighting cigarettes with little to no prior notice. Joey can lean in the foreground OR background of your city, presenting a wide array of potential uses. He comes wearing a plain white shirt, Street Weasels jacket, and a three day supply of hair lard grease (15,000,000 cans).
QUOTE: "Ain't nobody can gonna done be hittin' no 40 home runs a year! Pass me the smokes, Mikey!"

NAME: Kevin "Hipmaster" Bowen
AGE: 21
TURN ONS: Science, dark rooms, certain types of plywood
TURN OFFS: Social interaction, humans, sunlight
DESCRIPTION: Kevin is the "black sheep" of The Street Weasels, choosing brains over brawns. When one of The Street Weasels' high-tech gadgets or gizmos breaks, such as a baseball bat or pack of cigarettes, Kevin is called in to fix it. He does this by using a lot of electrical tape and sighing frequently. Although many of The Street Weasels have no problem getting dates on the weekends, Kevin's lack of social skills and geeky personality caused him to resort to more "scientific" means of finding a female companion: inventing a "love potion." However, once Rohypnol was declared illegal, Kevin's hopes faded. Kevin also wears a beanie and he will launch into a phlegm-induced coughing fit on demand.
QUOTE: "Ehhhhhhhh. Ehhhhh ehhh ehhhhhhhhh."

As you can see, our gang brings a breath of fresh air to these trying, nervous times. We'll restore America back to the classic grandeur that it once was, street corner by street corner. And if America can't have its grandeur restored by our methods of "smoking a lot" and "leaning on walls," then I'll be damned if I know what it will take to restore some grandeur. Probably a new coat of varnish. The Street Weasels don't do no painting, square!

Ooh la la, another ROM Pit Review? You got it! We're proud to present one of the absolute most flamingly homosexual games to ever hit the SNES: "Cho Aniki - Bakuretsu Rantou Hen"!

This should serve as an example of why you should not download files from sites in Poland, especially when the file is described with a string of text similar to this: "sjavjenky rommy... boljay noxwob. bolshi fight za homosex (!!!)". This game is quite literally the single most concentrated mass of gay that I have ever in my life encountered. It's like a huge, flaming gay star exploded and collapsed in on itself, sucking itself down into a black, gay hole.

Hot, hot mansex! Sounds good to me! Read the review there, bozo!