I began this project hoping to do no less than to create the perfect BabyMon, an advanced lifeform that would overshadow any baby known to man with its incredible physical and mental capabilities.

Initial progress was slow, as the vast majority of our DNA samples were of inferior quality; worse yet, any changes introduced would quickly lead to molecular instability and, eventually, complete genetic degeneration. Coupled with our meager resources, these roadblocks developed into a technological brick wall for my team. Despite my pride, my rational mind realized that the project could not be sustained as such. I was on the verge of shutting it down completely.

That is until a mysterious benefactor, known only as Giobabby, came to me with an offer that seemed too fortuitous to be believed. He would finance our project, providing not only top-of -the-line scientific equipment in an excellently furnished lab, but also the highest quality DNA samples I have ever laid eyes upon. His intent was obvious; he wanted the fruits of our research to be solely his, controllable, able to aid him in his criminal conquests. To be honest, as long as the accolades were mine, I frankly could not give a shit. I would create his chained monster, and the world would know that it was my genius that brought it into being.

Using DNA that Giobabby assured me was taken from the original BabyMon (a detail I initially dismissed as utter lunacy but eventually came to accept), my team was able to obliterate our former obstacles and bound forward in our research. While it was not an easy road by any means, the difference between our previous shoestring budget and Giobabby's endless resources invigorated us to levels of productivity I scarcely imagined possible.

Eventually, we completed the project.

The moment I saw my creation -- in its containment chamber -- first open its eyes and look down upon me with its toothless scowl, I knew I had damned myself. As I fell to my knees, it opened its mouth, and out came a deafening birth scream. The horrific sound, infinitely more powerful and ear-splitting than any normal baby could ever hope to produce, shattered the reinforced glass chamber. The monster ripped out its feeding tubes, spraying warm mother's milk across the lab as well as my writhing body. Slowly it shambled towards me, and with its bony baby fingers it picked me up. Bringing me face to face, it psychically projected its terrible message into my head: 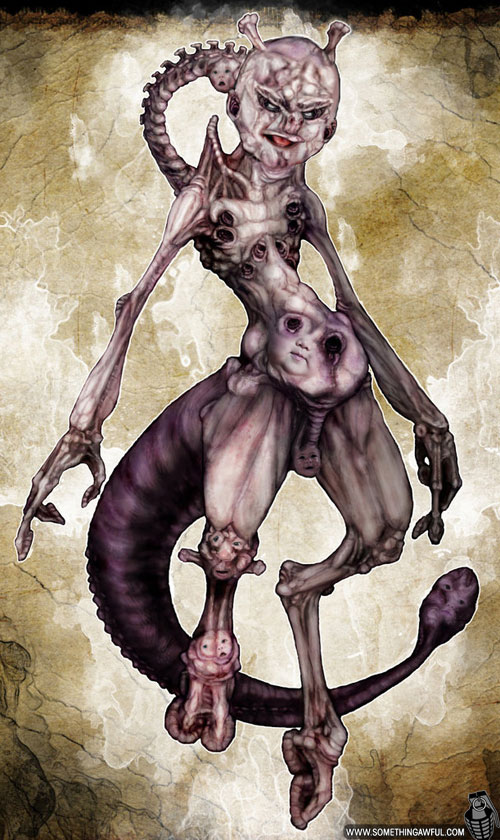