At a Glance: Ah... 1993... Back then I was just a wee child stuck in a mountain town in North Carolina. The Winter of 1993 brought us a savage blizzard that knocked out the electricity for days. My dad spent hours shoveling our 100-yard driveway, not out of safety concerns, but to buy beer so he wouldn't go all Jack Nicholson "Shining" on our obnoxious asses. Additionally, 1993 brought us "Warpspeed," one of the precious few Sega Genesis "boring simulators," which challenges the average gamer's ability to not kill themselves after the first 20 seconds of playing.
Platform: Sega Genesis, 1993
Know of a terrible ROM? Email Raptorred. 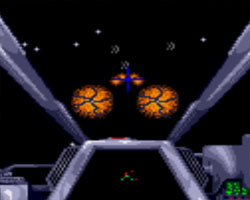 Your STRIKER ship fires meatballs at rocks! Yum!Story: The game begins with a distress call of "ALERT ALERT ALERT!" pleading for any pilot to fly over to a star base and kill some random aliens who are naturally up to no good. They don't bother telling you the location of their star base, so be sure to keep your eyes peeled: it's located somewhere in space. I guess this star base is too cheap for even the most basic of security measures, which would make sense considering they're relying on the skills of any random passing pilot in the galaxy.

After receiving what I thought was a pretty damn urgent message,I began my journey by training. I guess the space station in desperate need of help could wait while I flew around, collided with rocks, and received emails from angry clumps of space meat. The space meat email seemed a bit odd, particularly since the guy who sent it decided to take a break from, oh, destroying the galaxy to personally challenge me to a duel. I must be a pretty important generic interchangeable character for this evil overlord to hold out on wiping out all known life just so he can play a galactic game of chicken with me. After accidentally docking at a space station a few hundred thousand times, the overlord grew impatient and dared me to stop him from wiping out all life. I never bothered to take him up on the offer and I assume he got distracted by something shiny because, as far as I know, everything everywhere isn't currently dead.

Eventually I stumbled into some menacing space enemies, which responded by rotating and flying in circles. This trick didn't fool me; I simply armed my futuristic meatball cannon and destroyed them. I am still not sure who outfitted my ship with a high-powered meat launcher, but I guess in the future that's just the way things work. After training, I skipped directly to the campaign, which presented me with the following deep and emotional back story:

On my way to do accomplish this, I was sent through some kind of warp tunnel that tossed me even further away from the enemies I was hired to make dead. Frustrated, I turned the game off and can only assume the game ends with you killing all the aliens, saving the girl, and destroying more space rocks. Hooray!

Gameplay: Basically you fly around throwing cheese balls at rocks and enemy ships until either you explode or they do. The maps are pretty much worthless and I could never get motivated enough to do all the math required to find the coordinates that the space meat... thing... gave me. In fact, I had no idea if the ships I blew up were actually owned by the evil overlord guy or a family of tourists. I tried to find my way back to the base (which I think was destroyed) but the mini-map was written in the ancient language of "gibberish dickhead." It claimed the base was located in the northwest, yet heading in that direction caused it to actually move further away from me. Fortunately the larger map seemed to function, vaguely revealing the orientation of my spaceship. The game uses all of two buttons, one for shooting space meat , the other for looking at a map. I guess there's a way to shoot missiles as well, but I was simply so darn transfixed with my space meat and broken map that I couldn't spare the time to figure it out. 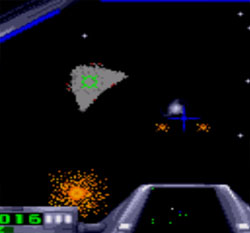 DIE YOU ROUNDED FUCKING TRIANGLE!Graphics: For a game made in 1993 the graphics really aren't too shabby. I never had a Sega as a kid so I can't really compare it to other Sega Genesis games of the time. All I remember is that in 1993, I played Super Mario World until I got blisters on my little retarded fingers. Warpspeed trades away smooth animations for some fake 3D-esque graphics, resulting in an incredible pixelated journey of meat through space. Honestly, the graphics are the only decent thing about this game, which is amazing when you consider the entire premise of the game is flying through a Windows 95 screen saver and occasionally colliding with dirt.

Enemies: Before playing this game, I was mistakenly under the impression that space contained a lot of, well, space. Now I know the average galaxy resembles a floating space rock I-405 during rush hour. Occasionally I would encounter what I assumed was an enemy (but could've also been lost stingrays who cut off their own tails), but they flew away from me while I attempted to launch food at them.

I suppose the warp tunnels could be considered enemies as well, because they constantly sent me further away from my destinations. Oh, also there's that whole thing about the evil aliens and space toads and literate meat that I never ran into... they sent some pretty mean emails!

Fun: Warpspeed has nothing interesting. This first person space shooter in which only two buttons seem to do anything has an embarassingly miniscule amount of content dispersed over an obscenely large area. If you play for ten seconds you have pretty much experienced the entire game, and if you mistakenly decide to play any longer, have fun trying to figure out how those awesome maps and coordinates work!

Defining Moment: Deleting this ROM from my hard drive. Seriously. This game has less action than a graphing calculator. I guess if I had to pick something in the game I would choose the title screen since even that was slightly less uninteresting.