At a Glance: Underwater base!? I love water! I love bases! How could this go wrong? Do you remember The Abyss? They put that fuckin' rat in that liquid and I was all like, "OH NO DON'T KILL THE RAT" but then it was able to breathe in the liquid! Then Ed Harris got in a suit with the liquid and at first was really freaked out but got over it and saved that one chick. If this game is anything like The Abyss... holy shit!
Platform: Sega Genesis, 1996
Know of a terrible ROM? Email Raptorred. 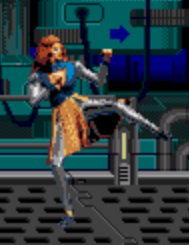 If she lifts that leg any higher we are going to have to fumigate this entire base!Story: Terrorists have invadedthe mid westan underwater super duper secret base in attempt to steal intelligence and sell it to the highest bidder, which was apparently not the developers of X-perts. Besides, I thought terrorists were the evil Russian (1996) guys that were the highest bidders! Anyhow, I don't think I should get hung up on that small issue with a game filled with bigger ones!

You get to play a rag-tag group of three secret agents that are all equally lame and stupid. Instead of having one bad-ass agent with a deep back story (wife and kid murdered bydrugged lunatics on Valkyrieterrorists), you get three morons with no back story at all named Zach, Tashile, and the ever elusive Shadow.

That about does it for the story, you are three people trying to stop the terrorists from stealing your intelligence. The objective: kill everything that moves.

Gameplay: Hold on let me wipe the tears from laughing so hard at the idea that this game has anything considered "gameplay." When I first started to play, I had no idea what the hell was going on and by luck I eventually selected "Zach" who was the only person that could figure out how to open a door. The primary mission of the first level is to open the doors for the other agents. That's right, the people we send to save the world from terrorists can't figure out how to OPEN A DOOR.

After solving the first puzzle (trust me it wasn't easy, I had to figure out which of ten computers was the right one to grope hard enough to squeeze out all of its airlock fluid), the other agents were free to go willy-nilly on some terrorist ass.

I killed every single terrorist I could find which opened up two more objectives on another floor. The only problem with that had to do with restricted access to the elevators. The only thing the two broads Tashile and Shadow (who looked like a bad rip off of Jade from Mortal Kombat) could do was walk back and forth while horribly animated and tinker with the life support. Zach, on the other hand, seemed to be very happy and content with not being around either of the two agents and made no effort to fix the elevator. 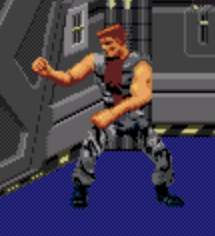 Jean-Claude Van ApearmsGraphics: I have seen better animations on an old Tripod website. The animations are sped up to laughable speeds and even those Toyota robots move more fluently than anything in X-perts. The levels consist of catwalks with a crappy teal tinted looping background of computer parts and water heaters.

All of the characters have gorilla-length arms and walk like they have something very hard and sharp shoved up their colons. Also, the uniforms that these agents wear don't make any sense. Zach wears camouflage, which actually does work to some degree although he looks exactly like Guile from Street Fighter. The two ladies, however, are wearing dresses and the last time I checked, those aren't very combat friendly. Perhaps the idea is to flash the terrorist bastards their vagina's and tits in an attempt to distract them so they can gingerly tap them to death with their high heels.

Enemies: Terrorists wearing jumpsuits pretty much describes the large cache of enemies that this game throws at you. I honestly don't know how but X-perts manages to have horrible voice acting in the one thing I thought anyone could do: die. Every time you kill a terrorist in this game they let out the worst "AGGHHH!!" sound I have ever heard in a game since before 1990.

Fun: This game is horrible even by 1996 standards. I always think it is funny when the developer of a crappy game looks upon it when it is finished and says, "Yep! That is exactly what I wanted!" The people I feel the worst for are the game testers that had to play this game over and over again looking for bugs. Then again, fuck them for stamping this turd with their approval. You can't even move when you pull your weapon out even after you find the two button combination to do so. What is the point of that!? By the time I whip my pistol out and begin to fire, the enemy is already pounding my face in with their pixelated boots and I can't get out of the way unless I put my weapon down. I found the most effective strategy to kill anything in this game is to just stand back and hit the kick button over and over until they die.

Defining Moment: Watching the pixel that represented my agent slowly crawl across the map in the pause screen when you told them to go somewhere.