At a Glance: I'm of the opinion that the video games we play are windows to our inner fantasies and desires. When he wasn't pretending to be a heroic ninja on an endless slaughter or a beastly caveman competing in intensive bouts of Paleolithic skill, the game-savvy child of the 80s wanted to pretend to be a bunch of grown men pretending to beat the shit out of each other in a pretend showcase of pretend ability and pretend drama. Sounds cool, I guess! Hey, nobody today tries to claim that the 80's weren'tidioticprofoundly incredible. 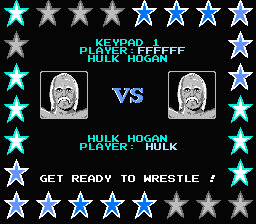 Graphics: Aside from a lovingly rendered portrait dedicated to the sexuality of Hulk Hogan, the first graphics we're treated to are the wrestlers' faces -which are decent for '88, if sometimes questionable. Then we get to see the actual game sprites and our world comes crashing down like a Harvard scholar watching reality MTV for the first time. In addition to the best "running" "animation" since Sword of Sodan, everyone is stuck in awkward, chicken-like poses. They look rejected dinosaurs, unsure whether they should evolve into birds or just lie down and welcome extinction with their hideous half-evolved wing-arm-arm-wings.

Gameplay: Speaking of which, the game's AI has a brain about the size of a walnut. You win the match by depleting your opponent's energy and then pinning him, but whenever the computer took my energy down, it would strut about the ring clucking for a few seconds before moving in for the finish, maybe.

That's okay, though, because the controls meant I lost 105% of the time (I thought about playing a round but didn't; the computer beat me anyway.).Each wrestler has his own abilities, executed by combos. They're pretty simple -stuff like B+up+down- but many only work in certain situations and there's no rhyme or reason between

Artificial intelligence is The Future.characters. B will punch for one guy, but will cause another to do a super tornado attack that leaves him vulnerable to weevils. Fuck, even stuff that every characters knows -like "PIN," WHICH IS NECESSARY TO WIN THE MATCH- will vary in controls and complexity from guy to guy. I find it totally unacceptable that an NES's game's controls be "a bit confusing" when the console pretty much had two fucking buttons. Good job Nintendo! A+! See me after class for your congratulatory rectal lobotomy! Oh yes, I can make it work.

Sound: When the title screen's music started up with the traditional thump thump thump thump thump thump SUPER HARDCORE MIDI, I had my misgivings. But after that, the music in Wrestlemania became oddly cheerful. It reminded me less of a death match and more of a pleasant tea party between a couple of kind-hearted princesses. Then you realize each princess has six heads and a segmented thorax leaking chromatic pus because you're on a fucking acid trip.

Fun: Wrestling is stupid, but so are a lot of things, such as fantasy football, international politics, and writing about fifteen-year-old video games on the Internet. Pro wrestling, however, is also offensive by insinuating that the only way for dudes to be manly is to call each other faggot and beat each other with chairs. WWF Wrestlemania is stupid, but it could have avoided being offensive had it included a difficulty setting or a 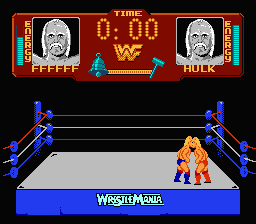 Hulk Hogan has this .png framed adoringly by his bedside. Sometimes, he duct tapes it to his wife's face.practice mode, because in some sort of alternate dimension the moves may actually be usable. Too bad the computer pummels the hell out of you while you're busy laughing at the sprites.

Defining Moment: Hulk Hogan's grinning mug all over everything. He is the best wrestler in the game because I guess in the 80s Jesus H. Christ himself had a boner for him. Lemme tell you something: Andre the Giant was a lovable guy who liked to play cards and starred in a children's classic. Hulk Hogan is a greasy-haired volatile sack of rancid meat who exploits his family on national television. One of these men died young. The other appears to be fucking immortal, his only sign of mental or physical growth in twenty years being that now he resembles one of his own action figures, charred with Dad's cigarette lighter and left atop an ant hill to bring the pain.

I also love a game that congratulates itself on kicking your ass.