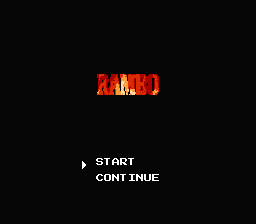 At a Glance: Hey there, Painkateers! Did you know they're making another Rambo movie this year? Yes, I'm aware it's now 2009 and they already made a Rambo movie last year, but I mean the brilliant minds of Hollywood are about to grace us with another one. Is it just me, or does Grandpa Rambo get more and more violent as his erectile failure or speed pooping or whatever continues to worsen in his old age? Instead of taking up a constructive habit like knitting or euthanasia, by 2013 we'll be bestowed with a film in which he drops an atomic bomb on an orphanage, CO-STARRING SHIA LEBEOUF!!
Platform: Nintendo Entertainment System, 1988
Know a terrible ROM? Email me! 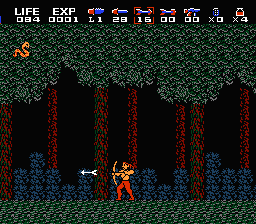 Man, I could really go for a lollipop. Story: However, Rambo for the NES is based on Rambo: First Blood Part II, a movie I could conceivably enjoy. Of course, I would have to ingest enough alcohol to transform my blood into viable rocket fuel, so I instead opted for Wikipedia. According to a synopsis apparently written by Sylvester Stallone's left pectoral, the movie explores Rambo's fondness for making things explode, particularly the entire population of Asia. The game involves stabbing a petting zoo to death. But we'll get to that later!

Gameplay: Rambo has a dynamic environment in which you can interact with other characters and make choices which affect the course of the game-- Oh wait, no you can't! At least the game is ahead of its time with its realistic Douchebag Engine, with which the NPCs can realistically decide that they're too good to talk to you for no discernible reason! This is probably a good thing though, as they tend to say things like "Go to the hangar" while standing in a building full of fighter planes.

The navigation system, meanwhile, is about as refreshing as a tall, cool glass of Agent 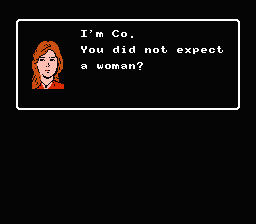 I don't know what to expect anymore.Orange. Despite the combat system having "sidescrolling platformer" written into its 8-bit DNA, the developers saw fit to infest each level with a series of meandering paths involving going "north" and "south" bewteen 23,074 screens via little tiles on the floor. I don't know why they bother to differentiate between directions, because, similar to other navigational classics, you just pop out wherever the hell the game deigns to put you. I guess Rambo is so gosh-darn hardcore he can jam an RPG launcher up the ass of spatial reality!

Graphics: Rambo's sprite looks less like a haggard Vietnam veteran than an extremely perky and tight-bodied Swedish aerobics instructor. Once you get into the dialogue screen, however, he inexplicably transforms into Thruk MacBoulderglug, Sole Populator of Prehistoric Scotland. Overall, the graphics just reek of the artists not giving a shit: various areas will use the same screen, characters' legs keep wiggling when the game is paused, areas are reused, the "animation" on the dialogue screens is legally classified as obscene in 23 states, the same screens are used multiple times, and THEY FUCKING COPY PASTE THEIR AREAS SO THAT JOURNEYING ACROSS THE MAP MAKES NO FUCKING SENSE.

Manliness factor: I bet you're excited by that huge bar of weapons at the top of the screen, but surprise! You 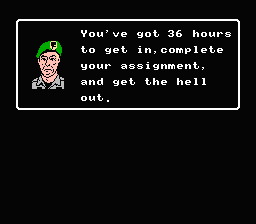 Man this would've scanadalized me when I was 8.won't get to use them! You technically could use them, but as you have to play through pretty much the entire malaria-tainted nightmare to get them, I'm going to recommend that you don't. Instead, you get to poke bees to death with a knife.

That's right, for 90% of the game John "Shits Explodium" Rambo's arsenal consists almost entirely of a sharp piece of metal, with which he kills birds, fishies, and kamikaze snakes. This must be very taxing for a seasoned warrior, because he receives experience points for it. While experience points work well for magical swordsmen, powerful magi, and perpetual virgins, I somehow doubt numbers are Rambo's strong suit.

Fun: The Rambo franchise may be almost entirely retarded, but it's got exactly one redeeming quality -Rambo can kill shit real good- which the the crack-smoking game designers throw down and do cardiovascular aerobics upon. Despite some tentative flirtation with such manly concepts as choppahs and tits, Rambo ultimately blueballs, leaving us with nothing to appreciate but his apparently fantastic rear end.

Defining Moment: After standing on a screen of a motionless boat fora few seconds, some broad tells me that "we have arrived." As you can see from this screenshot, we certainly fucking have not. Because nothing is happening like, say, an incredibly easy-to-code transition screen, I hopped into the water, but because it caused me to walk incredibly slowly and the water seemed to go on forever, I realized I was fucking up. However, Titties just repeats herself, and the lardass on the boat with us was deciding he was too good to talk to me. In a fit of desperation I hop back into the water, flounder way the fuck out there, and... Return to an area I've already visited? Wait, she's telling me I'm in a new area JESUS CHRIST IT'S THE SAME FUCKING SCREEN WHERE I STARTED BUT NOW I'M SOMEPLACE "NEW."

I wonder how many poor little saps killed themselves in '88 trying to figure that one out. Old Man Rambo strikes again!

Each category in the rating system is based out of a possible -10 score (-10 being the worst). The overall score is based out of a possible -50 score (-50 being the worst). Incidentally, the University's computer lab decided it was going to speak Chinese, which SOMEHOW deleted this entire article about 8 hours before publication, so I got to rewrite it all in one sitting, missing class.I'm just letting you know this so that younger, impressionable readers know that just because an institution is unreasonably expensive doesn't mean it's all it's cracked up to be, especially when you consider that the kid across the aisle from me is using a $10,000 University computer to scroll through the same 50 pictures of hot anime babes over and over and OVER again. Let's hear it for academia!