Flames from Review of Watchmen 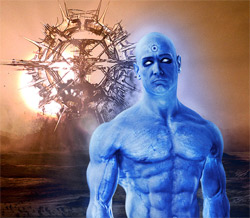 Last week I received an email from one of my friends in the Warner Brothers press office letting me know that he was sending out review screeners for the highly-anticipated Watchmen film. I usually pass on movie screeners, but given all the hype for this rollicking costumed caper I knew I couldn't pass up the opportunity.

Wednesday afternoon I had the screener in my DVD transmitter and I sat down on the couch with some popping corn and a box of Whoppers. Truth be told, I hate Whoppers, but I like The Whopper hamburgers.

Have you heard of these? They're absolutely delightful! The Burger King makes them.

It is a common mistake to purchase the chocolate enrobed malted candyballs when what you actually want is a fantastical hamburger candyball that does not exist. Yet. If they can teach a chicken to make us eggs then some day they will teach some other, smarter beast to make a The Whopper ball. Perhaps a cat will lay The Whopper balls for us, dropping warm and chewy balls down chutes and into a basket, or our waiting tummies!

I was already smarting from my The Whopper of a mishap and feeling a bit out of sorts as the opening of The Watchman movie began to play on my TV. Maybe not the best mood for writing a completely impartial review, but impartiality is for Priests and Saracens. I stand by my original column. 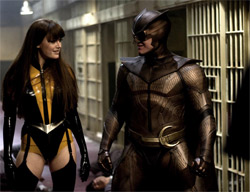 The response from you lot was, frankly, fucking bullshit.

I received a stinking heap of email regarding my review for The Watchman. Some readers directed their barbs at my factual accuracy, calling me an idiot or a faggot for imagined errors. Other hoggy oddies among you decided to flail their little hooves at their click-clacks and send me the full catalog of bad words.

Like any professional amateur Internet journalist I have decided to take all comments and constructive criticism to heart. I shall (will) forever enshrine their vitriol in the public record so that they might someday look back at this incident and sigh at what they have (hath) wrought (wrote). I will do my best to answer these emails, but above all: fuck them.

The most common subject for the emails I received was the supposed correction of the author of the original comic book The Watchman. In my article, I said it was Neil Gaiman, who also wrote The Sandman and Sin City. Many readers emailed me to tell me it was someone else entirely. Someone by the name of Alan Moore.

Thanks for your concern, Tandy. But before I wrote the article I not only read the story of The Watchmen, I looked it up on W-I-K-I-P-E-D-I-A. I am 100% positive it said Neil Gaiman wrote Watchmen, but it looks like you or one of your cronies has decided to edit the page to support your theory.

Since neither of us has a definitive source, I guess we will just have to agree to disagree. But hey, you're in good company...

That's very nice of you! Thank you for your email, Parisa. I really appreciate hearing from you on this subject. Belly Dancing is my third favorite of the adult dancing techniques behind lap dancing and break dancing. That's still pretty good!

Truth Media seeks to lure out the brainless zealots mindlessly spewing words about faceless companies and products they have no relation to. Why do folks get so worked up over such inconsequential things? Truth Media is here, not to discover the answer to this, but just to make fun of them.