Top 15 Ways To Pander To Digg

In the last installment of VGA, I poked fun at Electronic Gaming Monthly and the 1UP website/podcast network. In the two weeks that have passed, EGM has been canned after 20 years in print and 1UP has been bought up by UGO, nearly all of its staff fired and escorted from the building by security.

For this, I apologize. I momentarily forgot the tremendous power contained within my words. Dozens of people have lost their jobs as a result of my harsh but well-meaning jabs.

In an unrelated sidenote, Gamespot is exclusively staffed by people who smell like patchouli, no one has cared about PC Gamer since Gary Whitta left as the editor-in-chief and every issue went from the size of a phone book to the size of a tourism brochure for the world's smallest town, IGN seems to have no copy editors, the Shacknews guys are good friends of Something Awful but I'm sorry to say that they put so much time into their site because they're under house arrest for setting cancer clinics on fire, Gamespy is entirely too green, Kotaku is less green but even uglier, and UGO is IGN with less substance, which is sort of like saying a Big Mac is a Whopper without quite so much caviar. 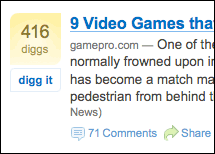 If anything should happen to these video game news outlets, let it be known that Video Game Article is for sale, and can fill the void left behind immediately. We can adapt to any format, from blog to extreme gaming lifestyle portal to tombstone epitath carvings.

As for the quality of writing that you'll get in the deal? I may not put things eloquently, but I put things. More importantly, I've learned that pouring as much creativity and effort as you can muster into an article will get you a handful of e-mails correcting "mistakes" that were meant as jokes, but coming up with an article named 50 Game Characters With Sunglasses and putting forth just enough effort to make sure that it has 50 entries will net you tons of traffic from Digg and the other social networking sites that have somehow managed to make the internet worse than it was five years ago.

If you buy Video Game Article, I will put that knowledge to work for you. I've already stashed away enough Digg-baiting article ideas to keep advertisers happy for the first month of business.

- Top 3,000 Screenshots Of Street Fighter IV That Have Been Released In The Last Month


- Top 18 Variations Of "That Was What You Call A De-Cleater!" As Recorded By John Madden

- The 25 Best Retro T-Shirts That Feature A Super Mario Mushroom, The Konami Code, Or A D-Pad

Penny-Arcade: On The Rain-Slick Precipice Of Darkness: Episode 2
Improves on the first installment in many ways, including the Episode number (that was a math joke, a bit of geek culture humor for XKCD fans). 8/10