The crowd funding effort for Chris Roberts' Star Citizen has raked in more than eighteen million dollars so far. Of course it has. A modern space combat sim from the creator of Wing Commander couldn't be more popular if it featured zombies and randomly generated blocks covered in horrible pixel textures.

Now the Star Citizen team has announced a new stretch goal, promising to add first person on-foot combat if they hit the $20 million mark. Why end there? The game is on track to rake in significantly more money, so why not add more stretch goals to match the potential funding?

$22 Million
There are now over 1,000 square miles of additional empty space.

$25 Million
Every craft in the game now has a startup sequence that involves the pilot turning a key and muttering "come on you stupid son of a..." as the ship coughs out a stubborn car engine noise. 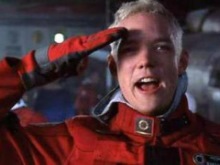 Each alien race will now have an actual distinct design to set it apart from other species. No more human models wearing sunglasses imprinted with the words "Cool Alien".

$40 Million
There is no longer a fog that obscures everything further than 50 feet from the cockpit ala Turok Dinosaur Hunter. This fog has been replaced by a luxurious satin curtain.

$60 Million
After an engagement with enemy forces, you will be brought to a fascinating mini game. It's basically the part from those Fight Night games where you control a hand as it rubs the open wounds on your gross potato face.

$100 Million
A vastly more detailed universe! We have populated space with over 80 journals. Learn the fate of an explorer who at first seems naive and flippant about a potential danger, then grows increasingly concerned about his predicament over time! Taking a page from Skyrim, we have also added hundreds of caves, each populated by a handful of spaceships to shoot.

$400 Million
The game's introductory logo movies have been replaced with the Wing Commander film in its entirety.

$600 Million
The magic system will be reworked, going from a fun extra to a rich feature that serves as a core pillar of the gameplay experience. We're talking about ice magic, blood magic, fire magic, charm spells, AOEs, heals, you name it.

$800 Million
Every cockpit seat now features a lever which, when activated, allows the pilot to recline.

$1 Billion
Fully realized third person cover shooting. Just bring your ship close to a space crate and hit A, or press the spacebar if you insist on using a keyboard. The view will pull back, enabling you to either blindfire or pop out to deliver a quick aimed shot. If the screen turns red and you hear a heartbeat sound, hide until you're healed!

$5 Billion
Space stations and enemy ships are no longer 2D sprites, but textured models. You know, like in the original Star Fox.

$8 Billion
Did somebody say Chewbaccas???

$12 Billion
In addition to going in forward and reverse as well as rotating up and down, all spacecraft can now turn to the left or right.

$17 Billion
More realistic sound design. If you stick your unprotected head out of your ship's cockpit and into the vacuum of space, you won't hear a thing. Unless there's an explosion. Or a laser zapping nearby. Or the scream of an engine.

$20 Billion
All players start the game with unlimited money, all ships unlocked, all content completed, and all enemies killed.

$20 Billion and a signed copy of Spawn #1
We're scrapping everything and turning this sucker into a MOBA. All backers will get a hand-written note thanking them for the money and for understanding our decision.

Total War: Rome II
Sim City presented a ton of systems that didn't actually do what they appeared to do or have any real meaning at all, and this design approach is once again tremendously successful at making the player feel like their input doesn't really matter. 6/10

Teenage Mutant Ninja Turtles: Out Of The Shadows
Please go back. 2/10