Which Old Republic Pre-Order Is Right For You? 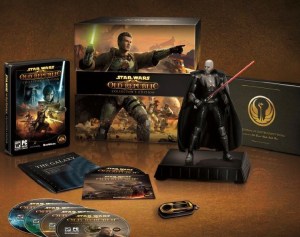 Although the game doesn't have an official release date yet, a special collector's edition of BioWare's Star Wars MMO was available for $150 in United States Dollars, or Freedom Bucks as they are known internationally. This version of the game came with a statue, galaxy map, and access to an "exclusive in-game store".

Unfortunately, this collector's edition was so genuinely limited that it sold out within hours, leaving the plain old boring $60 version and the $80 Digital Deluxe version which is exclusive to Origin, EA's digital distribution outlet that makes you pay for the privilege of downloading your own games after an arbitrary period of time.

If you're one of the ten thousand nerds disappointed by a missed opportunity to spend $150 on a game that hasn't been reviewed and that you haven't played, fear not! BioWare and EA have seen all the dollars still being waved around by potential customers, and are working on a new line of Old Republic special editions.

- Exclusively sold on Origin
- Buying this edition puts you in line for a slot to download the game, which will cost $10 per gigabyte
- Comes with an ultra exclusive subscription price of $30 per month
- Your first month of Game Scramblification Protection is absolutely free, but if you want to keep our service from scramblifying your game you'll just need to pony up $99 per year after that

- Entire thing made of carbonite, including the box, disc, and manual
- Might in fact just be a solid block of spraypainted granite
- Exclusive in-game item: A stone that, when activated, makes your character do the Han Solo "two hands up" pose and encases him or her in carbonite

- Full scale pewter replica of the wolf guy's severed hand
- Exclusive emoticons "He doesn't like you", "I have the death sentence on twelve systems", and The Carlton Dance

Bastion
The kid typed out the review, a noggin' full of memories flooding back as he rolled his fingers across the keyboard. 9/10

Captain America: Super Soldier
Not enough time was spent with a shirtless Captain America on the receiving end of lady groping, but I suppose that's the same gripe I have with every video game. 6/10

Ms. 'Splosion Man
The closest Twisted Pixel has come to making an actual game, punctuated by wacky FMV segments that have gone from funny (due to being mostly unexpected) to the embodiment of "Welp, I guess this is what we do now." 7/10

Harry Potter And The Deathly Hallows Part 2
An even more unnecessary Gears Of War-esque sequel than Gears Of War 2 or 3. 3/10

Catherine
The core gameplay is underwhelming compared to the bizarre (and occasionally fascinating) bits surrounding it, but at least this game dares to ask if you'd have sex with a ghost if it was attractive. 7/10

White Knight Chronicles 2
In case you didn't get enough of the mediocre banality that plagues modern Japanese RPGs, here are some more design decisions that learned nothing from the past ten years! 5/10