Your companion in BioShock Infinite is Elizabeth, a young woman with a sweet haircut and the unique ability to interact with tears in reality. Previews have cited examples of this power such as pulling a wagon from another dimension into your own for cover and depositing crowds of sympathetic fighters near your enemies. 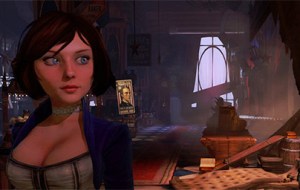 My concern is that this system will be relatively limited in scope. How many unique tears will be in the game? Will a conceptually creative mechanic become stale in practice as we see the same options recycled every few encounters?

Don't get em wrong - I have high hopes for BioShock Infinite. Everything about the aesthetic is compelling, and since Irrational Games has effectively killed thoughtful game podcasts by hiring GFW Radio's Shawn Elliott and Idle Thumbs' Chris Remo I pretty much have to buy their stupid game. That's why I've donned my game designer cap and come up with some creative uses of the tear system while the game is still early enough in development to implement them.

Puzzle Agent 2
When Telltale's best series gets better puzzles, it doesn't take much gum to figure out whether it's worth playing. 8/10

Jamestown: Legend Of The Lost Colony
This comes from a world where 3D never existed and instead the SNES was followed up by more sprite-based platforms, allowing games to stay fast, fun, and visually expressive - in other words, a better world. 8/10

Magic: The Gathering - Duels Of The Planeswalkers 2012
Because turning this into a yearly series makes them so much more money than putting out a fun game where you can actually customize your deck. 6/10

Cars 2: The Video Game
For the first (and hopefully last) time, a game based on a Pixar film is better than the movie itself. 7/10

Transformers: Dark Of The Moon
Could be worse, at least they never made a game out of The Island so scenes from it weren't recycled in this game. 3/10

Cube Ninja
Surprisingly one dimensional for a cube. 5/10