How to Be My Rocket League Teammate 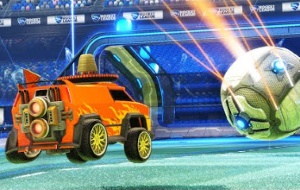 There are preset blurbs of text that you can select to broadcast in the chat window. You should definitely spam "I Got It!" constantly before kickoffs and any time the ball crosses into enemy territory. Never win a kickoff. Whiff every wide open shot.

We've just completed a non-ranked match. The post-game menu is displayed, and everyone else has hit Ready to start another match without waiting for the countdown timer. Ostensibly, we're all here to play the game. The menu is nice enough to get the job done, but it's not really the main draw. We've seen all it can offer. Now we're just waiting for you. Don't hit Ready. For absolutely no reason, let everyone sit at this menu while the timer ticks down.

Have the worst ping in the history of networked devices. Ping so rude it could only have been created by pouring honey in your ethernet port and connecting it to a melting router with a length of frayed twine. Ping so nasty that it infects me somehow. An alert flashes on my screen. I teleport eighty feet sideways. The other cars speed up then stop and disappear while my car drives independent of my input. Somehow, when the connection resolves itself, I am outside the stadium and my great grandfather was never born.

There's another preset chat phrase: "What A Save!" Use this every time we score a goal. You see, it's hilarious because the other team did not do a save. The statement is meant to be a compliment but now it is sarcastic. The intended victim is supposed to get mad. In reality the strongest emotion is your sense of self-satisfaction about doing an obvious and barely funny thing. This is the definition of trolling in 2015.

I've just taken a clean shot from beyond the mid-field line. The ball is rolling at a steady clip for the goal, and there's no one on the other team close enough to reach it in time. This is when you rocket boost in at the very last moment and tap the ball in to get credit.

The previous scenario begins to play out, but it's overtime. My long distance shot is a game-winning goal. You rush in at the last possible moment. In your excitement, you boost as you hit the ball, knocking it away from the goal.