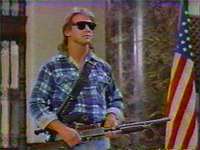 Thanks to the handiwork of Arcadian Delum The Mad, it has been brought to my attention that Rowdy Roddy Piper, whom you might know from the wrestling circuit as "Rowdy Roddy Piper," is now making his very own online game. I wish I could convince myself that I was kidding, but the proof is all here, folks.

KELLOGG CREEK SOFTWARE ANNOUNCES PARTNERSHIP WITH WRESTLING GREAT ROWDY RODDY PIPER FOR NEW ONLINE GAME - "Roddy's Ring" will be an online game, available only over the Internet. Chase explained that as with his previous online game, SpiritWars, the new wrestling project will draw from multiple genres and feature a hybrid design. "We'll be combining many common role-playing elements with a quick-paced strategy game that challenges the player to outwit his opponent. And, as with SpiritWars, we'll be putting a lot of energy into building a positive and engaging online community that can form the cornerstone for Rod's online presence and expanding Internet activities."

Yes, because we all know that fans of pro wrestling tend to flock to "positive" and "engaging" activities, assuming those activities are part of their community service requirements. Ha ha! I am of course kidding because it's an established fact that pro wrestling fans have an IQ of 200 and single-handedly won World War II. They also are the people most likely to send me bales of email pointing out what a horrible monster I am, so I think I'll refrain from making fun of them any further. Okay, maybe just one more joke: you guys are responsible for Terry "Hulk" Hogan's rise to fame, causing the abomination "Thunder in Paradise" to appear on MY fucking television set when I could've been masturbating to that midget from "Jack of All Trades." 'Nuff said.

So anyway, I began thinking about how massive online massively multiplayer roleplaying massiveplayer playing omnionline games are the only products actually generating cash these days. Titles like Everquest and Ultima Online have yanked in millions of dollars for their publishers; why can't Something Awful jump onto the bloated cash cow too? Even if this doesn't end up working well, Something Awful has failed in about every other business sense possible, so it's not like it will be any big loss. Well, without any further ado, I proudly present to you the preliminary specs for...

Conceptual artwork of... something.

PLOT: I did some research on other online roleplaying games, and I discovered that the "plot" element has to abide by only one rule: the entire storyline can't be more complex than a standard set of TV dinner cooking instructions. The deeper you write the plotline, the more work the programming crew has to do on the game, so most companies strive to make their plot as simple as possible. This is why I asked Jeff K. to ICQ me a brief plot summary for our upcoming smash hit, Dragon Fantasy Mystic Shadow Dungeon Horizon Event Online 7, or as we call it, DFMSDHEO7.

in teh futare there are are DRAGGONS with teh princess in a castal. yuo are ON A PLANAT!!!! there will be a sword and axe and guns and a hat and a lake. YUO CAN DRIVE A JEEP LIEK HALO?!? I think so! and the draggon stole yuor princessed and yuo must reclaim her becuase her dad si KING BOMPO TEH DRAWF and he has a magic jawline on him! so yuo will haev to get too level 580 whitch si teh hardiest and there si a jeep liek HALO!!!! the END

So that's the plot. I don't want to give away too many key elements of it, mainly because I'm not aware of what they are quite yet, but let me assure you that they will be very massive. And multiplayer.

WEAPONS: The key to any successful online RPG lies in the fact that it merely exists; you're marketing the game to a demographic that will buy any goddamn thing with elves in it. However, another important quality of online RPGs revolves around the sheer amount of the weapons and the inherent combat system. I am proud to report that we have one of the largest weapons databases in the history of all games! For example, let me copy and paste a minuscule selection from our "swords" section:

...and that's just 1/18237th of the entire "SWORDS" section! Wow! As some of you more observant readers may notice, there is no entry for "Sword +46." Our programmers seem to be having some difficulty creating this weapon, so we have intentionally left it out of the list. Look for it to appear in the upcoming expansion pack, DFMSDHEO7: The Ruins of Trials of Mountains of Planets of Legends of Tales of Gyraosn'aryahlabalwhampo.

ENEMIES: We've got a bestiary bigger than your computer's bestiality folder! There are so many enemies in the game that you won't be able to walk six inches without smacking into the ass end of some kind of retarded bug or goblin or whatever! Let's take a brief look at a few of the enemies inhabiting "Moanyeoentransalopi Hywwrm'alummpah," the tropical island located in the middle of a dungeon inside a volcano.

PLAYING AREA: Our game will have the absolute biggest map out of any online roleplaying game that has ever been created... or ever WILL be created! Just how big is the land of Htraeeht? I don't know, really big. Take the total square area of Everquest and multiply it by 50 or something. No, make it 60. Yes, it's THAT huge! Of course, 99% of that area is covered by water or deserts, but you'll never notice this because you'll be too busy getting killed by the level seven-zillion giant mutant ear worms that patrol the area! Take a look at the global map so far:

Notice the incredible attention to detail our skilled artists employed when they selected the appropriate font color to use. That's a fine example of what sets us apart from "the other guys," the ones that don't really care about their game and will probably spend all their profits on buying vending machines that dispense pure tar heroin.

There are a ton of other features in our game that I'd like to share with you, but frankly, I stopped caring about them around three paragraphs ago. Regardless, I don't think I need to mention that DFMSDHEO7 will be the "must play" game of the year or decade or century or whatever arbitrary time frame you'd like to choose. We've got the top animators, programmers, and art design teams chained to the radiator in our basement, so you can be sure that our game will be of the utmost quality. Stay tuned to this webpage for more exciting details, as soon as I think of them.

Cliff Yablonski Is Here to Help You!

Having successfully berated and singled out nearly all the mutants in his hometown of Appleton City, Cliff Yablonski has returned to fight for your freedom and rights to be a consumer. That's correct, please welcome the newest addition to Something Awful, "Cliff Yablonski: American Defender of Justice!"

Cliff Yablonski is a man of many trades. A war veteran. A master craftsman. A poet. A lover. A patron of the fine arts. In addition, Mr. Yablonski is one of the last true American heroes, ready to stand up and fight for YOUR needs and causes. He fights the big, multinational companies for the interests of the common man, ready to take a bullet for what we all firmly believe in, but don't have the backbone to stand up for. Get ready to cheer for a new hero, one who won't back down, roll over, and play dead. Cliff Yablonski is here and he's fightin' mad!

Head on over and witness Cliff Yablonski's dramatic fight for your freedoms when he single-handedly takes on Stouffer's Frozen Foods... and comes out victorious! I think.