Diary of a Sneeze Fetishist

Monday, Jan 27, 2003 by Rich "Lowtax" Kyanka (@TwitterHasBannedAllMyAccountsEver)
Know of an awful site? Send it to us and become a hero! 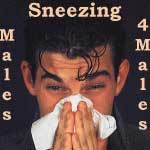 Another interesting thing I'm noticing, even as I'm writing this, is that I especially tend to stifle when I'm with a boyfriend or a man I find attractive. Unlike some people, I can't entirely stop my sneezes from coming when they invade my nose. I can make them less vocal, however, and I exercise that to the fullest. Even when I wasn't conscious that my interest in sneezing was an actual fetish, I'd always stifle around men I was interested in. In fact, I can be very embarrassed when I fail to manage it in time. I'm sure they never notice, but I completely do. I know that day in the coffee shop I sneezed a few times because of my cold. I didn't draw attention to the fact; I just pinched my nostrils shut and stifled, gleaning a few well intended "bless you"'s from Alex.

Though I like to bless people who sneeze, I hate it when people do it to me. Strange, isn't it? Maybe it's because they acknowledge something I wish they really wouldn't. It's as if you were to tell an involuntary flasher: "hey, I just saw your ---- there!" It would assuredly make them very uncomfortable. I think what goes on with me is something on the same level, though perhaps less disconcerting because sneezing and blessing happens on a daily basis and doesn't have that same negative social stigma attached to it. Though to tell the truth, the more I think of it, the more I think that comparison between involuntary flashing and sneezing in public for a fetishist is fitting. At least, for me, it's pretty much an apt metaphor for what I feel when public sneezing occurs. I also wonder whether that makes me a voyeur of sorts, when I see people sneezing in public and I stop to watch?

Wow! A Livejournal sneezing fetish site! What more could you possibly ask for, assuming you're still in the right mind to ask for something other than your own personal demise! Well how about some hot sneezing and S&M action? It's every fucking weird person's dream come true!