Andrew Antone, submitted by 1vs0. I'm an only child and I'll be the first to admit that compared to most of my friends I was a pretty spoiled guy. However, there were times my parents would allow common sense to temper their spoilage, like for instance, if I asked if they would pay to have some fake record label make a CD of me singing I think they probably would have shot the idea down. A big factor in their reasoning would probably be that my voice is about as appealing as Gilbert Gotfried's filtered through a police radio and a concert amp, then somehow filtered through another system that transforms sound into a hurricane of glass shards. Hey, that didn't stop Andrew Antone and his dream to embarrass the fuck out of himself and his family by getting them to finance a CD. 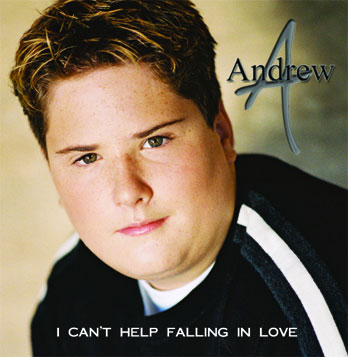 Andrew is currently pursuing acting-for-television and films. Andrew enjoys performing in musicals, comedies and dramas both on-stage and in front of the camera. However, singing is his passion! His strong influences have been Celine Dion and Andrea Bocelli.

Ugh. Kill it before it breeds! Actually if anything I feel sorry for Andrew. He's a puffy kid with an average voice, really gay sweaters, and the worst taste in everything imaginable. Unfortunately, either his parents or some hideous fever dream of his gave him the idea that there was a career waiting for him in the entertainment business. No, not waiting, careers wait for talented people. People like Andrew have to fucking BATTER their way into the entertainment industry with no less than three web sites and two pay-to-play CDs to his name. Did I mention that one of the web sites is a fucking members-only fan club? Five dollars says that the accounts belonging to members of that club are "TestAccount", "TestAccount2", "AndrewStone", "AndrewsMom", and "GrammyStone".

I'm sure if Andrew's parents pour enough capital to house ten poverty level families down the shithole on Andrew's vanity career as a singer/actor/dullard they will eventually be thrilled to see him standing next to Jerry Orbach during an exterior crowd scene on "Law & Order". Maybe, if we're all really lucky, he'll get sassy on the set with Jerry and the right honorable Orbach will pop him a couple times in the mouth and we'll get to see it all on tape. In the mean time, let's keep hoping for an extinction-level meteor to hit the earth just so it takes him out too.